Changing bowling actions is a difficult task, for it becomes a big part of your body.

How much has Saeed Ajmal’s action changed in the months after his suspension from bowling? The Pakistani off-spinner was reported for a suspect action in August last year and was then suspended. Ajmal’s elbow used to bend beyond the permissible 15-degree limit and had to rush to correct the flaw. READ: Tamim Iqbal, Mushfiqur Rahim tons power Bangladesh to 329 for 6 against Pakistan in 1st ODI at Dhaka

With ICC Cricket World Cup 2015 in sight, Ajmal began a tiring journey under the tutelage of Saqlain Mushtaq. With a modified action, he cleared the tests but did not participate in the World Cup. He finally made a comeback against Bangladesh in the ongoing ODI series with a new action. Full Scorecard: Bangladesh vs Pakistan 2015, 1st ODI at Dhaka

Going over some old videos, you could see that Ajmal’s arm was a lot higher. One could see the bend in his arm as well, which would have prompted the authorities to report him. Here is a video from 2014 where you can see him bowling with that action. This was about a month before he was reported. READ: Saeed Ajmal returns for Pakistan against Bangladesh in 1st ODI at Dhaka

The noticeable change in his bowling action on return can be seen as he is a lot more round-arm and one can see that his arm is a lot straighter. As a result his angle has changed, and he has emerged a different bowler. So far, he turn hasn’t been the same. Earlier, he used to get that precocious turn, but that wasn’t visible in his first outing. Perhaps it is a matter of time. READ: Rahim brings up 3rd ODI ton in BAN-PAK 2015 1st ODI at Mirpur

Changing bowling actions is a difficult task for it becomes a big part of your body. Once you are used to doing something over and over again, it is very difficult for your body to tweak it and adopt a new approach. Muscle memory is one thing coaches talk about. To get your body in the flow of a new action is a tough task but Ajmal seems to have worked very hard for this. READ: Tamim Iqbal scores a vital century in Bangladesh vs Pakistan 1st ODI at Dhaka

The question is: How much will it change his bowling? Will he attempt the ever lethal doosra? And, will it be as effective as it was earlier? Ajmal needs to be given time to get back into the flow. A quality player always overcomes difficulties and one would back Ajmal to do so. 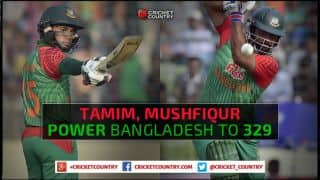