Samit Gohil’s 359*: An innings that hides in scorecard in a video-driven age

Samit Gohil’s 359*: An innings that hides in scorecard in a video-driven age

Samit Gohil's 359* was the highest score by any batsman to carry his bat in First-Class cricket, surpassing Bobby Abel's 357* back in County Championship 1899.

Only the ardent of cricket fanatics stay in synchronisation with First-Class cricket. These mostly include historians and statisticians. Besides, very few these days read about the ongoing at the grass-root level, unless Rahul Dravid is associated. But that is that. A First-Class cricketer has no option but to put up record-breaking performance to feature in the headlines, or these days social media newsfeed. On the other hand, bowlers are easily disregarded in a batsman-oriented era, unless one of them pulls off a Jim Laker or Anil Kumble. Or play for almost two decades without making it to the international circuit, one becomes a temporary talk-of-the-town.

The time has gone when fans queued up to buy Ranji Trophy tickets. They now have a more glamorous IPL a T20 format that lasts a maximum of for 4 hours. Fours, sixes, cheerleaders, broadcaster s thoko meter (you know what I mean), commentators screaming at the top of their voices: T20 is pure entertainment. Then there is Ranji Trophy: a game that lasts for 4 days, and 5 from quarter-final stage. Forget cheerleaders, there is literally handful of spectators. And the matches are broadcasted from the quarter-final stage; not all but the one the board wants it to be.

Ranji Trophy features 27 teams. Not many can name them all (not even me). To narrow down the point, not many would know its cricketers. Hence, the question beckons: why would fans go and watch a match between teams they have very little knowledge of? At least they are aware of the local cricketers. Sometimes knowing a name is enough to generate curiosity.

They did not know about Samit Gohil. Has he played in IPL? would be the question they d ask. It makes sense, does it not? IPL has now become a platform for cricketers to earn fame more than a ticket to international cricket.

Gujarat-Odisha played a quarter-final contest in Jaipur a place that knows Pankaj Singh Rajat Bhatia, Nathu Singh, among others. They wouldn t know Gohil, who had played only 27 matches before he scored a magnificent 359 not out.

In one of his articles, my editor-in-chief Abhishek Mukherjee wrote, Would Manchester United or Michael Schumacher have gained popularity in India in the early 2000s without telecast? Will mere match reports convince the next generation to take up cricket? And in the era of high-speed internet, all it needs is basic live streaming.

If not streaming, the board should have shared small clips on social media; maybe Gohil taking his helmet off and raising his bat to acknowledge those handful of spectators and his teammates something Cricket Australia or England Cricket does: this may be the very reason why cricket has not faded away in these nations.

England Cricket does that often. They shared Marcus Trescothick s 68 vs Surrey on his birthday; a mere 68. Yes, Trescothick is much bigger figure than Gohil, but the bigger figure hasn t scored a triple-ton. Had a County cricketer attained such genius, England Cricket would have made a compilation of small clips and celebrated it on social media. You must check their social media pages. They celebrate cricket, not only achievements.

But that s that. Gohil will have to rely on few photos clicked by his teammates from the pavilion to relive his 359*.

What is so hyped about this 359* anyways?

Gohil became the highest individual run-scorer for Gujarat. After Jaswant Bakrani and Akash Christian, he became only the third Gujarat player to carry his bat. And to top it all, this was the highest score by any batsman to carry his bat in First-Class cricket, surpassing Bobby Abel’s 357* back in County Championship 1899. That s the hype.

For that matter, BCCI does not offer accreditation to most media houses, especially websites to cover matches. Most of us have to rely on a scorecard that speaks in numbers.

BCCI did broadcast a match between Jharkhand and Haryana. We saw the young Virat Singh play a characteristic knock on a track that produced bounce. Virat tackled the likes of Amit Mishra, Mohit Sharma, Yuzvendra Chahal. A left-handed batsman with an ability to play 318 balls to score 107 was a delight for a cricket purist. However, it was a delight for it was telecasted.

Just like the Gohil-dominated contest, the other two weren t streamed. One of them saw Mumbai-Haryana play a thriller, with the former winning it by 30 runs.

In fact, Gohil s is not the only innings we had the misfortune to miss. There were four more batsmen who blasted triple-tons this year: Priyank Panchal, Swapnil Gugale, Rishabh Pant, Sagun Kamat.

Not that we ask to telecast or stream every match. A short clip shot on a phone capturing the highlighting moment would help the fans know about a player. Above all, it would be a good gesture to acknowledge the achievement, for it does not happen often.

BCCI, which sanctioned US $5 million for IPL in 2008, can at least afford to take a leaf out of Cricket Australia and England Cricket s page to produce short social media clips more than a mere scorecard that speaks only in numbers just like they do during IPL matches. 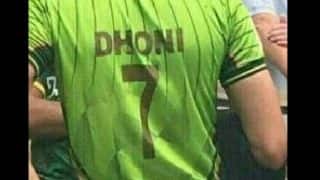