Sanath Jayasuriya, Brian Lara, Mark Wood and others who scored all runs in an innings in boundaries

Sanath Jayasuriya, Brian Lara, Mark Wood and others who scored all runs in an innings in boundaries

Mark Wood was the most recent one to achieve this feat.

Coming to bat at No. 10 in the fifth Test of Ashes 2015 at The Oval, Mark Wood scored 24. The innings included six fours. Wood s 24 is the highest individual score in Ashes where all runs came in boundaries (fours and/or sixes). However, it is not the record in the history of Test cricket.

The highest all-boundary individual score is 32 by two batsmen. Sanath Jayasuriya scored 32 with eight fours against India at SSC in 1997, as did Alex Tudor in his 32 against New Zealand at Edgbaston in 1999. Jayasuriya faced 38 balls while Tudor batted 62 balls for their 32. The closes to this was Brian Lara s 16-ball 30 against India at Bourda in 1996-97. Lara hit six fours and asix.

Shoaib Akhtar (28 with 4 fours and 2 sixes) and Seymour Nurse (26 with 5 fours and 1 six) have also done better than Wood. The table below lists the highest individual scores in Tests that were all scored in boundaries.

– Alex Tudor faced 62 balls for this all-in-boundaries innings of 32 not out, as did Boeta Dippenaar for his 20; this is the most balls faced by batsmen in the above table.

– Harbhajan Singh scored 20 off 9 balls with five fours, which is the lowest.

Let us now list innings where all runs were scored only in sixes. The record is held by, of all people, Courtney Walsh. Surprised? Walsh scored unbeaten 18 runs with three sixes against England at Edgbaston in 1994. There are five batsmen who scored 12 runs with two sixes. The table below lists the details.

Highest individual scores made all with sixes

– There are 39 instances of batsman scoring exactly 6 runs with a single six in Tests.

The most consecutive runs scored all in boundaries at the start of an innings is 40 by Chris Gayle during his 333 against Sri Lanka at Galle in 2010. He hit 7 fours and 2 sixes for those 40 runs. These are subject to matches where ball-by-ball records are known.

There are two batsmen who have started their innings in a Test with two sixes on the first two balls they faced: Foffie Williams (against England at Kensington Oval in 1948 off Jim Laker) and Sachin Tendulkar (against Australia at Chepauk in 2012 off Nathan Lyon). 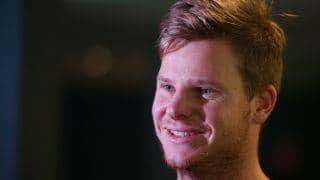 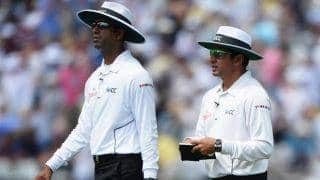 All three umpires officiating in a Test match being Asians