On May 17, 1997, Sanath Jayasuriya recorded the highest One-Day International (ODI) score by a Sri Lankan,  at the Wankhede Stadium in the Independence Cup match against India. His batting broke the spirit of the home team who were not even given an inch by the Sri Lankan southpaw. The feature of his batting was the command with which he engineered the run-chase by scoring nearly two-third of the runs on his own. Sarang Bhalerao revisits Jayasuriya’s stellar effort. 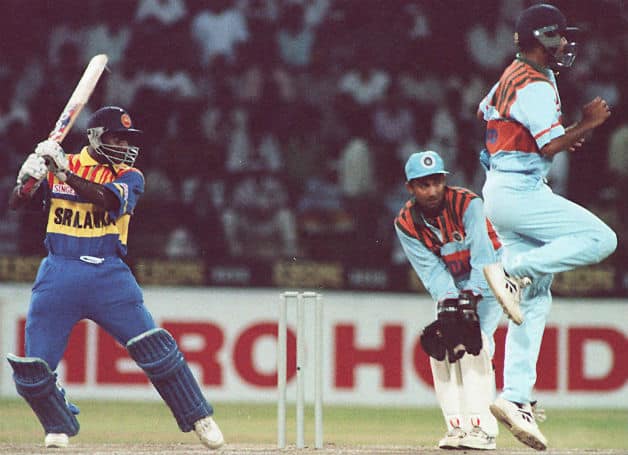 Sanath Jayasuriya (left), pictured here in an ODI against India in August 1997, mesmerised the Mumbai crowd with compelling strokeplay and responsible knock had won him a lot of fans © AFP

On May 17, 1997, Sanath Jayasuriya recorded the highest One-Day International (ODI) score by a Sri Lankan,  at the Wankhede Stadium in the Independence Cup match against India. His batting broke the spirit of the home team who were not even given an inch by the Sri Lankan southpaw. The feature of his batting was the command with which he engineered the run-chase by scoring nearly two-third of the runs on his own. Sarang Bhalerao revisits Jayasuriya’s stellar effort.

The preceding 18 months gave enough indications about the culmination — the world of cricket was dominated by the Asian Emerald Isle. The 1996 World Cup victory was a watershed moment in the history of Sri Lankan cricket and their approach towards the ODI version was refreshing. The tactics to take on the bowling in the first 15 overs caught the international attacks off-guard. Sanath Jayasuriya was the tormentor-in-chief who pummelled international attacks to submission courtesy of his cavalier, yet well-thought out, approach.

In the recent past Jayasuriya had had scored the fastest half-century in ODIs against Pakistan off 17 deliveries and had registered a 48-ball hundred against the same opponents. Getting his wicket early was the opposition team’s first and the foremost goal. There was no apparent weakness in his technique. The bowlers around the world were busy in finding some loophole in his batting.

Come 1997 and still the teams had no methods to arrest the Sri Lankan marauder. At the Wankhede stadium, India locked horns with Sri Lanka in the Independence Cup. Sri Lanka had lost their first game against Pakistan by 30 runs at Gwalior while India had convincingly won their opening game against New Zealand by eight wickets at Bangalore. A loss in this game would have meant disqualification for Sri Lanka from the competition. But Sri Lankans were like cornered tigers, having the propensity to come back with a vengeance at the times of despair — the top-quality in the DNA of any champion side.

India won the toss and chose to bat as disaster struck immediately. Sourav Ganguly, Sachin Tendulkar and Vinod Kambli were dismissed in quick succession. India played the catch-up game for almost the entire part of their innings and managed a modest score of 225 in their 50 overs. Ajay Jadeja’s 72, Rahul Dravid’s 61 and Robin Singh’s 51 were the bright spots in Indian innings.

The Sri Lankan run-chase began with Jayasuriya taking on Venkatesh Prasad in the first over. But Abey Kuruvilla removed Romesh Kaluwitharana for naught in the second over. The ball was moving a tad. Jayasuriya played out the good balls but it was a delinquency to bowl anything short and wide to him and it was felony to pitch the deliveries on his pads. He got those freebies on a consistent basis. The Indian bowlers discovered that the margin for error was minuscule while bowling to the attacking Sri Lankan opener.

Marvan Atapattu played second fiddle to Jayasuriya. Together, the duo put on 138 for the second wicket. Jayasuriya never let any bowler dominate him; he never let anyone settle. The spin duo of Anil Kumble and Sunil Joshi was swept regularly which befuddled them. The part-time bowlers were carted for runs. Captain Tendulkar was short of ideas; Jayasuriya’s assault had him in a fix. Eleven fielders seemed less and the bowling resources looked depleted.

India did manage to get Atapattu (38) and Aravinda de Silva (0) in quick succession, but whenever Jayasuriya came on strike the mood became sombre. The deep fielders were on their toes, the fielders in the inner ring were on the edge of the thirty-yard circle. Yet he found ways to pepper the field and play cat and mouse with them. The Indians were happy to give Jayasuriya a single and attack the rest of the batsmen. Such a polarized thinking after the early foray meant that Indians were on the backfoot for the most part of the match. That was the Jayasuriya effect.

Jayasuriya’s 151 off 120 deliveries was sprinkled with 17 boundaries and four sixes. He overtook Aravinda’s 145 to record the highest innings by a Sri Lankan in ODI cricket. Three years later Jayasuriya broke his own record against India by scoring 189 at Sharjah.

The Mumbai crowd was mesmerised by the batting virtuoso. His compelling strokeplay and responsible knock had won him a lot of fans. After a decade they welcomed him with open arms, reverberated the chants of “Suriya Suriya” when he joined the Indian Premier League (IPL) franchise Mumbai Indians.