Sanath Jayasuriya, born on June 30, 1969, was one of the most feared openers in world cricket.

Sanath Teran Jayasuriya, born on June 30, 1969, was one of the most feared openers in world cricket. In an international career that lasted over two decades, Jayasuriya featured in 110 Tests, 445 One-Day Internationals and 31 T20 Internationals for Sri Lanka. Nishad Pai Vaidya picks a few statistics that define Jayasuriya s stellar career.

1. Colossus at the top of the line-up: Considering the impact Jayasuriya had on the game, it is difficult to believe that he stepped into international cricketer as a lower-order batsman who could bowl left-arm spin. Jayasuriya blossomed to become one of the most feared openers in world cricket. Sri Lanka started experimenting with the option of him opening the batting in ODIs in 1993, before he settled into the role during the Mandela Trophy in 1994 where he smashed his first ton against New Zealand. Thereafter, he batted at other positions on only six occasions in ODIs. A comparison between his record at the top and at other positions makes it clear. In 383 innings as an opener, he smashed 12,740 runs at an average of 34.61 with 28 tons and 66 fifties; all his ODI tons came while opening the batting. He batted down the order 50 times and scored only 690 runs at a paltry average of 14.68.

3. Sri Lanka 70 for one: Jayasuriya 66 not out, Kaluwitharana 0! During the 1996 Singer Cup final against Pakistan, Jayasuriya smashed the fastest fifty in ODIs getting to the milestone in only 17 balls. He went past Simon O Donnell s record of an 18-ball fifty. But, what made this innings special was its sheer dominance. Sri Lanka lost Romesh Kaluwitharana for nought with the team score on 70 out of which Jayasuriya had carted 66. Jayasuriya went on to score a 28-ball 76, yet failed to inspire a successful pursuit of 216.

4. A precursor to AB de Villiers feats: Today, AB de Villiers holds the records for the fastest 50, 100 and 150 in ODIs. In the preceding era, only Jayasuriya could boast of such dominance. As discussed above, Jayasuriya hit a 17-ball fifty in 1996 against Pakistan, which remained the record until de Villiers got there in 16 against West Indies in 2015. In the same tournament in 1996, Jayasuriya became the first man to score an ODI ton in under 50 balls getting to the milestone in 48. Since then, the record fell to Shahid Afridi and Corey Anderson, before de Villiers claimed it with a 31-ball ton. In 2006, Jayasuriya got to his 150 off only 95 balls against England, which was the fastest 150 at the time. Shane Watson bettered it by getting there in 83 balls against Bangladesh in 2011. De Villiers though had the last laugh as he achieved the mark in 64 balls against the West Indies at Sydney this year.

5. The mammoth partnership – Tests: During the Colombo Test against India in 1997, Sri Lanka piled a record 952 for six at the back of Jayasuriya s triple ton. During that Test, he shared a record 576-run partnership with Roshan Mahanama, which became a Test record, going past Andrew Jones and Martin Crowe s 467-run stand of 1991. The record stood for nearly nine years before Kumar Sangakkara and Mahela Jayawardene stitched a 624-run partnership for the third wicket against South Africa in 2006. In fact, Mahanama and Jayasuriya fell one-short of the then highest partnership in First-Class cricket 577 between Gul Mohammad and Vijay Hazare for the fourth wicket for Baroda against Holkar in the 1946-47 Ranji Trophy final.

6. Plundering India the 189 at Sharjah: Jayasuriya tormented the Indian bowlers through his career. Consider this: he scored seven out of his 28 ODI tons against them. His most memorable assault of the Indians came in 2000, when he bludgeoned 189, his best ODI score. Out of Sri Lanka s 299, Jayasuriya accounted for 189 which is about 64 percent. What makes it all the more remarkable is that India were then bowled out for 54, which means that Jayasuriya alone outscored India by 135 runs! Thus, he had also scored more than half of the runs recorded in the whole match.

7. Hitting 30 runs in an over twice: Herschelle Gibbs holds the record for the most runs scored in an over, courtesy his six sixes off Dan van Bunge during the 2007 World Cup. Before that, Jayasuriya claimed the record of the most runs scored of an over in ODIs which was 30. And, he managed the feat twice! Jayasuriya first did it against Pakistan in 1996 at Singapore off the bowling of Aamer Sohail. He repeated the feat in 2001 when Chris Harris was handed a similar treatment in Sharjah.

8. 1996 World Cup the breakthrough: No article or profile on Jayasuriya is complete without his 1996 World Cup heroics. It is fair to say that it was his breakthrough moment as he helped Sri Lanka lift the trophy. In the group game against India, his assault (79 off 76 balls) at the top setup a successful run-chase of 272. Such was his aggression that Manoj Prabhakar, the Indian seamer, was forced to bowl off-spin after Jayasuriya and Kaluwitharana carted 33 off his first two overs. However, his standout performance came against England in the quarter-final when he picked 82 off 44 balls to make easy-work of the 236-run target. Jayasuriya finished the 1996 World Cup as the Man of the Tournament with 221 runs at an average of 36.83, with a strike-rate of 131.54.

10. Boundaries galore: Jayasuriya finished his career with 270 sixes in ODIs, which is the second highest in the history of ODIs behind Afridi s 351. He is also second to Sachin Tendulkar (2016) in the list of most fours hit in a career 1500. Jayasuriya was the first man to hit over 10 sixes in an innings when he smashed 11 during his 48-ball ton against Pakistan. This remained a record for the most sixes hit in an ODI innings until 2008. Jayasuriya also held the record for the most fours hit in an innings 24 against the Netherlands in 2006. This has only been bettered by Rohit Sharma, Tendulkar and Virender Sehwag during their respective double centuries.

12. Only player to score 10,000 runs and take 300 wickets in ODIs: Jayasuriya s feats with the bat would often overshadow his useful bowling. He finished with 323 ODI wickets in a 445-match career, which also saw him take four five-wicket hauls. His best figures of six for 29 came against England at Moratuwa in 1993. Jayasuriya is the only man to score 10,000 ODI runs and take over 300 wickets. Jacques Kallis came close to that as he ended with 273 scalps to go with his 11,579 runs.

13. Smashing six fours in an over: Jayasuriya s one-day feats may be greater than in Test exploits, but he did dominate in the longest format on numerous occasions. He signed off in style from the format in 2007 against England at Kandy by hitting 78 in his final innings. During that knock, he took apart James Anderson as he hit six fours in an over.

14. Making a mark in the young-man s format: In the inaugural Indian Premier League (IPL) in 2008, a 38-year-old Jayasuriya proved that age is only a number when he hit 514 runs in 14 matches for the Mumbai Indians at a strike-rate of 166.34, which included a 45-ball century against the Chennai Super Kings. Jayasuriya finished his 30-match IPL career with 768 runs, scoring 74.21 percent of them in boundaries, notes statistician Bharat Seervi. 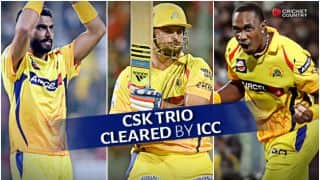