The incident occurred during Pakistan's tour of India in the 1983-84 season.

Just before the Nagpur Test took off on October 5, 1983, the selectors decided that Sandeep Patil should be part of the playing XI. Abhishek Mukherjee looks back at a logic-defying incident unfold on the morning of a series-deciding Test.

Thanks to some defensive cricket and regular bouts of rain, Pakistan’s 1983-84 tour of India was headed for nowhere. Zaheer Abbas, missing the services of Imran Khan and Abdul Qadir, went into a defensive mode, and Kapil Dev was not much better either.

Tahir Naqqash reduced India to 85 for 7 before Roger Binny and Madan Lal pulled off a Houdini act, guiding their side to 275, Pakistan got a slender lead of 13, and the Test finished under queer circumstances with Sunil Gavaskar and Anshuman Gaekwad waiting at the ground as Zaheer Abbas walked away with his team.

Jullundur was hosting its first match, and it witnessed Dara Dotiwalla give Mohsin Khan LBW off the first ball. Wasim Raja scored an attractive hundred, Gaekwad scored a drab 201 (at that point the slowest Test double-hundred), and the third innings lasted a mere 9 overs. One of the attractions of the Test was the appearance of local hero Jahangir Khan, the last survivor of India’s first Test in 1932.

It was clear that the Nagpur pitch would take turn. Despite that Zaheer Abbas erred, leaving out Iqbal Qasim and going in with Mohammad Nazir as the solitary specialist spinner. The decision would backfire, but more of that later.

India left out Srinivas Venkataraghavan (he never played another Test) and brought in debutant Raghuram Bhat. Binny had scored 83 not out and 54 in the 2 Tests, and had also claimed 2 wickets at Jullundur, making way for Kirti Azad — presumably because the latter bowled off-breaks.

The problem was elsewhere. Mohinder Amarnath had been in outstanding form in 1983 (he had amassed a thousand runs by April), and though he scored a mere 11 from 2 innings, dropping him was out of the question.

Unfortunately, Mohinder declared himself unfit just before the match despite severe medication. Surprisingly, the selectors were not keen on getting Binny into the side and included Sandeep Patil, who was not even in the squad.

KR Wadhwaney wrote in Indian Cricket Controversies: “Why was he not being included when there was a clear-cut vacancy was difficult to understand. It seemed that the powers that-be had different designs and ideas up their sleeves.”

There was a small problem: Patil was in another city, and there was no way he could make it on time. Wadhwaney narrated: “In arrived Nagpur’s most influential politician. He revealed that after a lot of effort, he had been able to convince the Maharashtra Government that Sandeep Patil might be provided state plane to arrive in Nagpur for the match.”

While all this was happening, Patil had no idea of the goings-on, and could not be contacted. His family sent his kit to the airport. The aircraft waited till Patil reached Santa Cruz Airport, and took off only in late afternoon.

Gavaskar wrote in Runs ’n’ Ruins: “Who exactly were the people who made the decision to ask Patil to fly down is not clear, though at the time it was announced that the team as a whole had met and insisted on Patil being asked to play. This is not true at all, because I do remember Kapil calling a meeting in the dressing-room and informing the players, rather than asking their opinion. So it was quite clear that the decision was made by someone else.”

Two things went in favour of India: rain delayed play on Day One till 50 minutes before tea; and Kapil won the toss and elected to bat. Had India bowled first, it was perfectly within Zaheer’s rights to not allow India a substitute.

Patil arrived just before stumps. India lost Gaekwad and Dilip Vengsarkar, and finished the day on 92 for 2 with Gavaskar and Yashpal Sharma at the crease. Patil had a good night’s rest, but it did not matter. He played “an exquisite drive to get off the mark”, but was too late in playing a bouncer from Azeem Hafeez, edged it, and was caught by Raja.

Spin and other turns

Patil’s dismissal left India reeling at 103 for 5, but their all-rounders came to rescue. Kapil scored a quickfire 32; Shastri hung on grimly for a 143-ball 52; and Syed Kirmani waltzed his way to a 28-ball 30. India eventually scored 245.

The ball with which Shastri got Mohsin (it turned viciously and almost climbed on the batsman) demonstrated the demons in the pitch. Javed Miandad (60) became Bhat’s first Test wicket (though it was a wrong decision). Bhat removed Mudassar Nazar (78) as well, and Zaheer scored 85 — his highest score in India — in his last innings on Indian soil. Pakistan led by 77.

Gavaskar and Gaekwad went all guns blazing, obliterating the lead without the loss of a wicket. They even reached 125 for 1 when Nazir removed Gavaskar for 64, and wickets started falling in a heap. Gavaskar later wrote that Nazir “turned the ball at right angles”: it may have been an exaggeration, but he returned outstanding figures of 50-19-72-5, bowling his overs unchanged; his wickets included Gaekwad, Gavaskar, Vengsarkar, Shastri, and Azad.

The absence of a second spinner hurt Pakistan’s cause. Somewhat mysteriously, Zaheer delayed the advent of Raja. He kept the 37-year old Nazir going at one end with Hafeez and Naqqash alternating (with one slip) at the other. It was there that Pakistan lost the plot.

When Raja eventually came on 45 minutes after lunch, he dismissed Patil and Kapil in quick succession. India were 207 for 8 at this stage, and led by a mere 130 with 2 hours left, and Pakistan still had the chance to push for a win. Fortunately for India, Madan (sometimes erroneously reported as dropped first ball) and Kirmani added 55 before Kapil made a token declaration.

Naqqash and Hafeez opened for Pakistan, and Kirmani, bowling his off-breaks, ran through Hafeez’s defence, much to the amusement of everyone.

Man of the Match: Ravi Shastri. 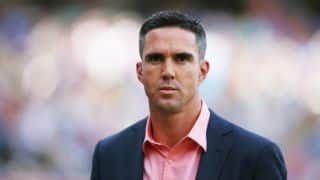