Sandeep played a pivotal role in Punjab's victory over Maharashtra as he picked 6 wickets.

Sandeep Sharma, who returned to bowling in the domestic circuit, said that he was expecting to be a part of the India probables for ICC World Cup 2015. “I don’t know how to describe this, as it always disappointing to have missed out. I’m enjoying my cricket with Punjab. I was expecting to get picked for the ICC World Cup 2015. I have performed really well in the List A matches,” said Sandeep after Punjab beat Maharashtra in a Ranji Trophy tie.

Punjab chased down 205 in 46.5 overs and scripted a victory at Pune. Sandeep played a pivotal role in the victory as he picked up a total of six wickets. Punjab now play Saurashtra at Rajkot on Sunday.

“The atmosphere is very good in the team after win against Maharashtra. We bowled them out and chased the target down. We were positive from the start and we wanted to win the match. Now the focus is on the next match at Rajkot,” he quipped.

Sandeep made a return to the domestic scene after he was out of cricket post Indian Premier League (IPL) 2014. His form has been exquisite since then. He has been one of the top wicket-takers in the domestic season after his return.

“This is a satisfying experience to bowl coming from an injury. I’m bowling at the same pace, momentum and form. I’m performing well. It a nice feeling. I’m concentrating on line and length and swing and after coming back and my pace has also increased after coming back from injury. I have almost recovered from the injury and now I’m just focusing on my rehabilitation. I’m bowling a lot of overs and also playing a lot of cricket to get back into shape. My body is also responding well to the pressure,” expressed the 21-year-old bowler.

He also praised his teammate Yuvraj Singh, who has shown brilliant form in the two Ranji Trophy matches he has played: “Yuvraj is an incredible batsman. He is batting really well at the moment and his contribution to the team is always very good. His experience really helps the team.” 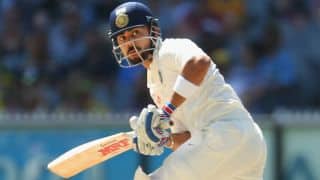