Sanjay Bangar: 16 facts about India’s batting coach who once played for the country

Sanjay Bangar: 16 facts about India’s batting coach who once played for the country

As a batsman, Bangar was a floater in the team as he could bat at any position from opening the innings to playing at No. 7.

Born October 11, 1972, Sanjay Bapusaheb Bangar is a former India all-rounder and the current batting coach of the Indian cricket team. As a batsman, Bangar was a floater in the team as he could bat at any position from opening the innings to playing at No. 7. A more than useful bowler, Bangar had the knack of taking important wickets. On his birthday, Chinmay Jawalekar recollects 16 facts about the player, who could have achieved a lot more for India as a player.

Bangar s birth records show his was born in Beed, but he was actually born in a village some 25-30 kms away from there. He studied in Aurangabad up to tenth standard, before moving to Mumbai to pursue his cricketing aspirations.

2. Early memories of the game

Bangar s first encounter with the game came in the year 1983. Once in an interview given to Espncricinfo, Bangar said, The first game I watched, on a neighbour’s television, sitting on a staircase, was the 1983 World Cup final. He was from that generation of cricketers, who took up cricket after the famous World Cup win in 1983, getting inspired by players like Kapil Dev and Sunil Gavaskar.

Bangar was selected for the Maharashtra Under-15s and played one game for the team. But since there was little cricket in Aurangabad, he decided to move to Mumbai to develop his cricket. He came to Mumbai at the age of 15 and found the going tough initially as the boys of his age were far superior to him (that includes the likes of Sachin Tendulkar and Vinod Kambli.) He did not get to play any match for a couple of years, though he was a heavy scorer at club level.

He played for the youth teams of Maharashtra and Mumbai but the tough competition for places in the Mumbai side made him turn towards his employers Railways. He made his First-Class debut for them in December 1993. Playing against Vidarbha, Bangar scored 45 and 16 in the match and failed to take a wicket in the only innings he bowled in. It was the only game he played in his debut season, but he excelled in the coming seasons, eventually going on to become one of Railways biggest icons.

Having played eight domestic seasons, Bangar had made a name for himself in the domestic circuit. When England came touring in the year 2001-02, he was elected to play the Board President’s XI match against England. He bowled well in that match and took seven wickets, which included fifer in the second innings. He was promptly picked in the Indian team. He made his debut in the first Test at Mohali and there were two other debutants Tinu Yohannan and Iqbal Siddiqui. Though he was picked for his bowling, he wanted to open the innings, as he did it for his domestic side and had even told the same to captain Sourav Ganguly. But it was Deep Dasgupta who opened and got a hundred. Bangar scored 36 batting at number 8 and failed to pick any wicket in the match that India won by 10 wickets.

In only his second Test, he scored his maiden Test century at the same venue where he had made his First-Class debut eight seasons back. Playing at No.7, Bangar scored an unbeaten 100. He was the third centurion for the team in that innings, as Shiv Sunder Das had scored 105 and Sachin Tendulkar got 176. India won the match by an innings margin.

Bangar s first big moment came at Headingley during the third Test from 2002 series between India and England. Opening the batting for India, he scored a resolute 68, adding crucial 170 runs for the second wicket with Rahul Dravid. It was his knock at the top of the order that set a solid foundation for the Indian triumvirate of Dravid-Tendulkar-Ganguly to score tons and set-up an India win on the English soil. It was a historic win and considered one of India s finest, Bangar was one of the heroes of it. He also chipped-in with two important top-order wickets in the second innings as India went on to beat England by an innings and 46 runs. This Test gave him his identity.

Bangar s One-Day International (ODI) career lasted 15 matches. He scored 180 runs at a rather poor average of 13.47 and picked up seven wickets. He scored a lone half-century in his ODI career, which was a blazing one and came in a winning cause against the West Indies, where India successfully chased down a score above 300. Another notable ODI innings came against the same opposition in the same series, where his unbeaten 32 helped India win a low scoring game by three wickets. He was a part of India s World Cup 2003 squad that ended as runners-up but he didn t get to play a single game.

When West Indies travelled to India later that year, Bangar did well against them in Tests, scoring two half centuries.But he was quite unfortunate as the selectors dropped him for good after two poor away Tests against New Zealand. It was quite harsh on the selectors part, as they could have given him a longer rope considering his all-round abilities.

Bangar proved to be a lucky mascot for the Indian Test team during his career. India did not lose any of the 12 Tests he was a part of, except for his last two Tests in New Zealand. Furthermore, India registered two rare overseas victories in Port of Spain and Leeds during Bangar s time with the team.

In the 165 First-Class matches that he played, Bangar scored 8349 runs at an average of just above 33. He also took 300 wickets in those matches, making him an all-time domestic great. During his time with the side, Railways won five championships in domestic cricket two Ranji Trophies, two Irani Trophies, and one one-day title win.

Apart from Vijay Hazare, Bangar is the only cricketer to have achieved a double of 6,000 runs and 200 wickets in the Ranji Trophy.

Bangar s Indian Premier League (IPL) stint can easily be divided into three categories. The first one, when he was signed by the Deccan Chargers in the inaugural IPL; the second one, when he was sent back by the Kolkata Knight Riders (KKR) from South Africa in order to manage their expenses in the country and his coaching stint with the Kings XI Punjab in 2014, where he took the side to the finals in his first assignment. His sending back from South Africa also reportedly created a rift in the KKR camp.

A successful run with the IPL franchise landed Bangar the job of assistant coach of the Indian cricket team. He was later made the batting coach of the team, a role he still plays.

Bowling came naturally to Bangar, but he never paid too much attention to it. He always wanted to be a batsman and worked really hard for it.

Bangar owns two farms; one in Mumbai and the other in Aurangabad. It is quite natural of him as he comes from an agricultural family. There should be no surprises hence if he is found on a farm a few years down the line. 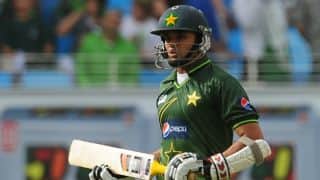 Pakistan vs England 2015: Azhar Ali ruled out of 1st Test