With this, there are now 10 wins by Pakistan against Sri Lanka (and 1 defeat) in ICC 50-over matches (World Cups and Champions Trophy).

10 wins by Pakistan against Sri Lanka (and 1 defeat) in ICC 50-over matches (World Cups and Champions Trophy). This is the joint 2nd-most by any side against any opposition: Australia have an 11-3 record against New Zealand while West Indies have a 10-4 lead over Pakistan.

10 Pakistan s win-loss ratio against Sri Lanka in ICC 50-over matches, the most for any side against any opposition with a 10-match cut-off. India come next with 9 (9 wins, 1 defeat) against Zimbabwe. No other side has a ratio of more than 4 against another side.

0 non-World Cup ODIs between Pakistan and Sri Lanka on English soil before today. However, they have met thrice in World Cups in England: at Trent Bridge in 1975 and at Swansea and Headingley in 1983.

5,413 days since Pakistan and Sri Lanka have last played in an ODI outside Asia. The previous match came on August 17, 2002, at Tangier. It was their second match at Tangier in four days.

75* highest 8th-wicket partnership in the history of Champions Trophy, between Sarfraz Ahmed and Mohammad Aamer today. They went past Mitchell Johnson and Brett Lee s 70 against West Indies at Johannesburg in 2009.

46 highest 8th-wicket stand for Sri Lanka in Champions Trophy. This was achieved by Asela Gunaratne and Suranga Lakmal. The previous record was 24 between Nuwan Kulasekara and Thilan Thushara against New Zealand in 2009.

11 instances of 8th-wicket partnerships from both sides amounting to over 40. This was the 3rd match involving Pakistan and 2nd involving Sri Lanka.

61* scored by Sarfraz today, the 2nd-highest by a captain-wicketkeeper in Champions Trophy. Only AB de Villiers (70 against India at Cardiff in 2013) had scored more.

25 wickets for Lasith Malinga in Champions Trophy, the 2nd-most in history. Malinga is now behind only Kyle Mills (28). He went past Muttiah Muralitharan (24) today.

250 ODIs for Shoaib Malik. He became the 10th to reach the landmark for Pakistan. Of contemporary cricketers, Mohammad Hafeez (188) is the next name on the list, while Kamran Akmal has 157.

213 players have now got ODI caps for Pakistan. Fahim Ashraf was their latest debutant, today. Fakhar Zaman, their 212th ODI cap, made his debut in the previous match. Before Fakhar and Fahim, the only other Pakistani to make his debut in Champions Trophy was Salman Butt, back in 2004.

18 matches for Shoaib Malik in Champions Trophy, the joint 5th-most in history. Mahela Jayawardene and Kumar Sangakkara head the list with 22 each, followed by Sanath Jayasuriya (20) and Rahul Dravid (19). Brian Lara and Ricky Ponting have also played 18 matches each.

6 matches as captain for Angelo Mathews in Champions Trophy, the joint 2nd-most for Sri Lanka. Jayasuriya has led 7 times and Mahela 6 times.

2 ducks for Dinesh Chandimal in Champions Trophy, the joint 2nd-most for Sri Lanka. Jayasuriya leads the way with 3, while Sangakkara, Murali, and Malinga all have 2 each.

26 highest score by a Sri Lankan No. 9 batsman in Champions Trophy. This was achieved by Suranga Lakmal. The previous record was held by Murali, who had scored 18 against England at Johannesburg in 2009.

9 catches for Malik in Champions Trophy, the joint 5th-most in history. Only Mahela (15), Ross Taylor, Sourav Ganguly, and Dwayne Bravo (all 12) have more. JP Duminy and Daniel Vettori also have 9 each. 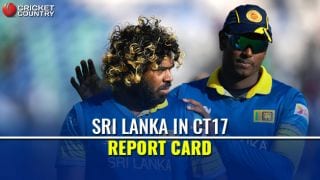 ICC Champions Trophy 2017, Sri Lanka review and marks out of 10: Islanders shoot themselves in the foot, squander opportunities