Sarfraz Ahmed came under heavy scrutiny before he played well at Sharjah.

He bats like Saeed Ajmal and his wicketkeeping is like Kamran Akmal. He is simply a quota player. No one knows why selectors are so kind to Sarfraz Ahmed.

These are some of the many comments which have been said about Sarfraz — the man who was the real architect behind Pakistan’s victory in Sharjah against Sri Lanka, on January 20, 2014.

However, if we keep these comments aside for a moment and relive the scenario of the match, when Sarfraz stepped in just before tea break and swept the game away, I am sure many would disagree with these aforementioned views.

Sarfraz Ahmed’s moment in the sun

Pakistan were still 205 runs away from the target of 302 runs. Ahmed Shahzad, Khurram Manzoor and Younis Khan had all gone back to the pavilion, without doing well. Critics began speculating a draw. However, at this crucial moment, this ‘quota player’ with immense courage and risk tacking tendencies put the team back in the driving seat. Pakistan was back in the game with Sarfraz leading the way.

Here is an excerpt of what George Binoy, assistant editor of Cricinfo, had to say about Sarfraz’s role in the match.

“Pakistan needed 195 (runs) in 35 overs at the start of the final session and they had made a tactical decision to send Sarfraz Ahmed in at number five, shortly before the tea break. He proved to be the catalyst and the method he used to attack Rangana Herath’s defensive line oozed with resourcefulness.”

“Herath operated from over the wicket and pitched wide outside leg stump for most of his 19 overs, which cost 100 and yielded no wickets, but when he did so after tea Sarfraz took guard near the wide-ball indicators outside leg stump and lofted inside-out through covers to beat a packed on-side field. After several such shots, Angelo Mathews moved a fielder from the leg to the off and Sarfraz promptly slogged Herath over the midwicket boundary to take 15 runs off the 29th over, the most expensive of the match.”

Sarfraz, who faced immense criticism before the Test match at Sharjah cricket ground, became a nationwide hero after his particularly impressive innings of 48 runs on just 46 balls. Former players like Wasim Akram, Waqar Younis and Rameez Raja praised the brave effort of the young wicketkeeper-batsman against some aggressive bowling.

But this was not the first occasion when the Karachi-born wicketkeeper-batsman scored runs in difficult circumstances.

Here is a review of a few brave knocks by him, in his short cricketing career of just six Tests and 26 One-Day International (ODI) matches.

Sarfraz joined the team only after Adnan Akmal went back to Pakistan due to injury. Although he failed to perform in the first innings, the second innings went fairly well. He not only managed to score his very first half century during the match, but also saved Pakistan from an innings defeat. His knock of 74 and partnerships with Bilawal Bhatti and Ajmal gave the hosts a lead of 136 runs. Though it finally turned out to be a modest score for Sri Lanka to chase it down, it still highlighted Sarfraz’s calibre as a cricketer.

Pakistan’s visit last year to South Africa proved to be a nightmare for the whole team. After suffering defeats in first two Test matches of the series, the final Test took place at Centurion, South Africa. Pakistan were five wickets down, with just 107 runs on the board, when Sarfraz stepped in.

He added 95 runs with Ajmal and Ehsan Adil to salvage some respectability. Finally, Dale Steyn took his wicket. Though, Pakistan suffered an innings defeat, one has to admit that Sarfraz showed his potential against strong pacers like Steyn and Vernon Philander.

Pakistan were facing Bangladesh in the tournament’s final. Bangladesh won the toss and opted to field. Pakistan had lost six early wickets at the score of 133 and it was at this crucial time when Sarfraz joined Shahid Afridi. Although Afridi departed to the pavilion with the score reading 178, Sarfraz essayed a fine knock to take Pakistan to a challenging total. At the end of the 50 overs, he had topped the run charts for Pakistan with 46 runs next to his name, and had given the bowlers a respectable total of 236 to defend. As we know now, Pakistan won a close encounter.

It should be mentioned here that when Sarfraz played important innings of 46 runs in the Asia Cup final, former skipper Aamir Sohail openly stated that selectors must give a decent run to Sarfraz, but that did not happen. The Pakistan Cricket Board (PCB) remained adamant on calling back their favourite, Kamran to the team, which forced Sarfraz to take the back seat.

Now, the time has come to give Sarfraz a consistent run in the side to showcase his talent. He has the ability to represent Pakistan in all genres of the game and play according to the situation that he is placed in.

Calling him Pakistan’s AB De Villiers might be an overstatement, but in light of Sarfraz’s performance over the past few matches, one can prophesise that he is on his way to becoming an asset for Pakistan cricket.

(Asad Ahmed is a TV journalist who likes to write on sports as well as social and political issues. The above article has been reproduced with permission from  http://tribune.com.pk/) 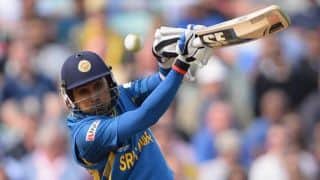