Cricket commentator Rameez Raja was fined 10% of his commentary fee after pleading guilty to a level 1 breach of the International Cricket Council (ICC) code of conduct for commentators during the thrilling India-Pakistan encounter at Mirpur on Sunday. 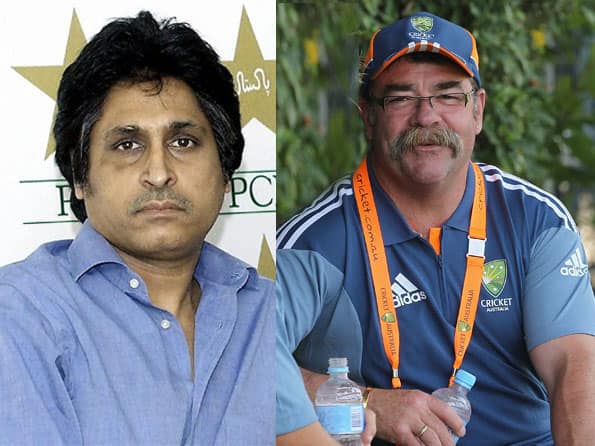 Cricket commentator Rameez Raja was fined 10% of his commentary fee after pleading guilty to a level 1 breach of the International Cricket Council (ICC) code of conduct for commentators during the thrilling India-Pakistan encounter at Mirpur on Sunday.

Raja was found by match referee David Boon to have breached Article 4.2.0.1 of the code which relates to “atrocious commentary that made viewers cringe in pain or tear their hair out in frustration”. The former Pakistanskipper has been warned that a repeat performance will result in his getting banned from doing any more commentary.

In his defense, Rameez said he was trying to sound ‘cool like Ravi Shastri’ but admitted he ended up only sounding annoying and phony. Rameez, who is now under pressure to retain his place in the commentary team, opted for an extra session of practice in the commentary box in the Sher-e-Bangla Stadium, all by himself, while fellow commentators took off to have a good time in their plush five star hotel bar.

However, Sunil Gavaskar was kind enough to offer tips to Rameez to help him correct some technical flaws in his commentary. “You need to know where your microphone is, and use correct footwork while negotiating verbal bouncers from fellow commentators.  Just like good batsmanship is about crease occupation, classical commentary is about commentary box occupation,” observed the original Little Master. Rameez diligently took notes.

Rameez is also grateful to Ravi Shastri for emailing 50 clichés to add to his rather limited repertoire of commentary phrases.

“I am diligently practicing Shastri clichés so that I can become almost as good as him,” said Rameez sheepishly.

Cricket fans and players alike are demanding that Shastri, or at least his bot, replace Rameez.

Virat Kohli wistfully recalled how every time he smote a ball to the boundary, he yearned to listen to Shastri’s booming voice say “that went like a tracer bullet”.

“That’s why I still rate the Hobart innings as more special because of Shastri bhai’s memorable commentary,” said the Delhi lad in a sentimental tone.

Mrs. Ritu Shastri has assured cricket fans and cricketers that Ravi will be back in action for the IPL.

“After one year of non-stop cliché ridden commentary, Ravi’s physio has advised him to give his vocal chords a break. But don’t worry, he’ll be back with a bang for IPL,” said Mrs. Shastri to The Unreal Times. “

That’s what the doctor ordered,” she giggled.

Shastri, who is one a maun vrat till the start of the IPL, for old time’s sake played out a recording of one of his memorable lines from a recent match. “TAKEN!!!” boomed the all too familiar voice.

We miss you, Ravi. Come back soon!