Concerned by the sagging TRPs of the ongoing Indian Premier League (IPL) and increasing viewer fatigue, the Board of Control for Cricket in India (BCCI) has announced a change in the format for the remaining league matches in this year’s edition. 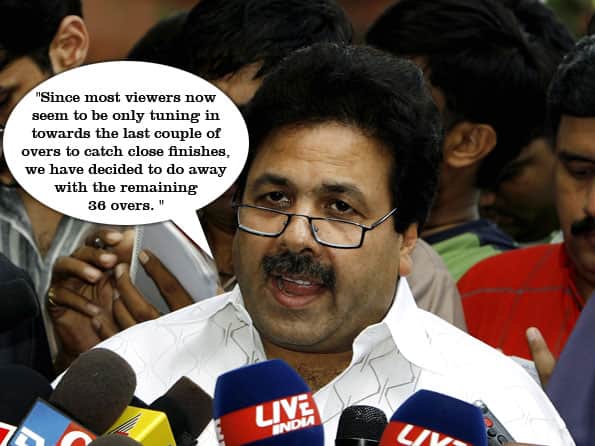 Concerned by the sagging TRPs of the ongoing Indian Premier League (IPL) and increasing viewer fatigue, the Board of Control for Cricket in India (BCCI) has announced a change in the format for the remaining league matches in this year’s edition.

Instead of 20 overs per innings, each match would now constitute two overs per side in a brand new format – labeled as T2 by the IPL Governing Council.

Speaking to the media outside the Parliament, IPL chief Rajiv Shukla said, “There is still time to decide the Presidential candidate, and I request the media not to indulge in speculation…er… kya bataaya aapne? IPL ki parliament? IPL? Okay… at the outset let me estate that there ees no problem with the ratings. However, since most viewers now seem to be only tuning in towards the last couple of overs to catch close finishes, we have decided to do away with the remaining 36 overs.  Now this should make the IPL5 very successphul.”

Shukla hastened to assure television spectators and Sony executives that the abbreviated format would not reduce the volume of entertainment and the ad-space that goes with it, but only change the mix of entertainment. The innings themselves would be spaced out with bigger, better and many more on-field / dugout interviews. Besides interviewing team owners, coaches, players, players’ wives and girlfriends and cheerleaders, Shibani Dandekar and Archana Vijaya would now indulge in cute chit-chats with the coaches and players’ mothers and grandmothers, the cheerleaders’ husbands and boyfriends, the owners’ children and the owners’ pets.

Extra Innings, meanwhile, would continue to be scheduled at 7.00 pm on single game days, and 3.00 pm on double-header days. To compensate for the reduced on-field action, each session of Extra Innings would now feature a second group of in-studio cheerleaders, a second DJ, one additional  female anchor with a fake British accent, one additional female anchor with a fake American accent, and at least four more cricketing jokers experts.

Gaurav Kapoor will fill in with inane one-liners, and engage cricketing legends in lengthier and completely pointless conversations. IPL has already sounded out all known former cricketers, with the exception of Kapil Dev.

The commentary team has been quick to adapt to the new format as well. Cricketing legend, Sunil Gavaskar was initially heard shouting “That’s just not cricket” upon being informed about the development, and sulked for several hours at the “desecration of cricket”,  but quickly fell in line after the BCCI reminded him about his contract.

The Little Master later showcased his rich experience and deep cricketing acumen as he explained to a rapt Simon Doull that T2 was nothing but the final state in cricket’s natural evolution. “When we first started finding Test cricket boring, we did away with four days and came up with one-day cricket. When we started finding the One-Day Internationals boring, we did away with the middle overs and came up with T20. Now that most T20 matches seem to be getting exciting only in the final two overs, T2 is the obvious logical conclusion,” Gavaskar concluded, as an awestruck Doull concurred hastily.

Ravi Shastri, however, did not need any persuasion. “Just what the doctor ordered to cure viewer fatigue. Now every game should go down to the wire,” he intoned.