Almost eight months after they stunned Australia in their own backyard in Hobart, New Zealand raised visions of victory over India – a potent force at home – before succumbing to defeat in the second Test at Bangalore. 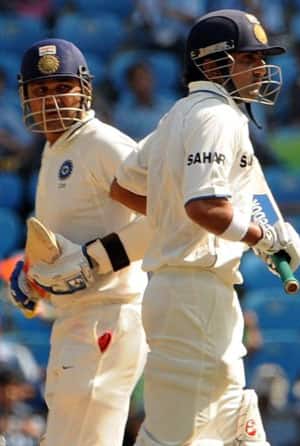 Almost eight months after they stunned Australia in their own backyard in Hobart, New Zealand raised visions of victory over India – a potent force at home – before succumbing to defeat in the second Test at Bangalore.

New Zealand sprang a huge surprise with their gritty batting performances and skilful bowling on a sporty Chinnaswamy Stadium wicket.

Captain Ross Taylor led from the front with a quick century in the first innings, with Martin Guptill providing able support. The performances of the pace trio of Doug Bracewell, Trent Boult and Tim Southee would have provided much cheer to England, who are to visit India shortly.

The manner in which the Indian top order capitulated against Southee in the first innings and the nervousness shown in the second provide enough reasons for skipper Dhoni and coach Duncan Fletcher to put their thinking caps on as India will be facing a far more tougher challenge later this season, when England arrive shortly for a four-Test match series. Southee emerged as top wicket-taker in the two-match series with eight scalps.

The series against the Kiwis presented India an opportunity to ascertain their situation in Test cricket, especially after the retirements of the two batting greats Dravid and Laxman, which followed the annihilations in England and Australia.

The infusion of Cheteshwar Pujara at the coveted No 3 spot in place of Rahul Dravid and Virat Kohli’s bank-like assurance at No 5 in place of VVS Laxman were thumping successes, but the opening pair of Virender Sehwag and Gautam Gambhir and the contentious No 6 slot, occupied by Suresh Raina, continue to be a worry.

After 11 Test innings, the famed pair of Sehwag and Gambhir fired up their first 50-run partnership to provided momentum for India’s chase. Both Gambhir and Sehwag showed aggressive intent from the word go and provided India the platform from where the batsmen that followed could capitalise on.

The opening stand and the Indian win should not obliterate the challenges that India face at the top of the order. Sehwag’s last Test hundred came way back in November 2010, when he clobbered 173 against the Kiwis at Ahmedabad. Gambhir touched the three-figure mark in the same year – against Bangladesh in January 2010.

The failures of the Gambhir-Sehwag opening pair has lot to do with India’s plummeting fortunes in Test cricket. Though India may not look for immediate alternatives, the fact remains that the openers are not giving India the confidence and comfort they once gave as one of the finest pairs in Test history.

The other area of concern is Suresh Raina, who hasn’t quite been able to transform his success in the shorter formats of the game. A century against Sri Lanka on debut followed by seven half-centuries in 29 innings doesn’t do justice when the likes of Ajinkya Rahane, Rohit Sharma, Manoj Tiwary and Subramaniam Badrinath are waiting in the sidelines.

Raina’s performance against New Zealand was below par, as he garnered only 58 runs from two Tests at an average of 19.33

Having the batting averages of 34, 35 and a lowly 21 against England, Australia and New Zealand respectively in the last three Test series, the Little Master continue to have a bad time out in the middle. His responsibility in the Indian batting line-up at No 4 becomes more critical in absence of Dravid and Laxman, and so does his role in mentoring the youngsters. He will be essentially critical when England arrives, and one can only hope that the batting maestro comes out all guns blazing.

Home teams normally play to their strengths. But at Bangalore, India had a pitch that favoured seam and swing, bounce and pace, which exposed their batsmen. The unfavourable batting conditions for the home team batsmen was heightened by overcast conditions. Captain Dhoni went so far as to say that it felt more like playing in Napier than Bangalore!

The Chinnaswamy track provided less turn compared to the one in Hyderabad, which is surprising. It must be recalled that England produced bowler-friendly tracks during India’s tour last year, and what happened there proved a nightmare for Indian cricket.

Will India take a similar risk against the high-quality English seamers? Unlikely.