When a great team loses through complacency, it will constantly search for new and more intricate explanations to explain away defeat – Pat Riley, respected basketball player and coach and now President of the Los Angeles Lakers. Virender Sehwag needs to stop relying on divine intervention and riding on previous highs, and start performing like an experienced player © Getty Images

When a great team loses through complacency, it will constantly search for new and more intricate explanations to explain away defeat – Pat Riley, respected basketball player and coach and now President of Miami Heat.

Riley was preaching from his years of experience as a basketball player and coach, but judging by the happenings over the last year or so, more so in the last one month, the Indian cricket fans wouldn’t be wrong if they thought his words above were directed at Team India. The dust from the overseas humiliations in England and Australia had barely settled when senior members of the Indian cricket team were unabashedly belittling the two series losses and proudly boasting of their impressive home record.

“We also won 2-0 (at home against Australia in 2010),” interrupted Virender Sehwag, when a journalist began to question him about the back-to-back whitewashes following India’s defeat at the Adelaide Test, before going on to blame Father Time for their poor performance. “The time is not good for Indian team, for individuals, so maybe that’s why we are not scoring runs. The moment the time changes, the next year we will see, or in the coming series, we will see our top order giving starts and middle-order coming in and score big hundreds. It happens.“

Only, it didn’t happen. Neither did the top order provide starts, nor did the middle-order score big hundreds.

Sehwag’s fellow opener, Gautam Gambhir, also toed the same line as his Delhi teammate. “…When we go overseas, every country prepares wickets to their own strengths,” he had said at Adelaide. “So once the other teams come home we need to prepare tracks to our advantage as well…If we can prepare rank turners, that’s where their technique and their temperament will be tested…That’s where we would get to know whether they are mentally strong. That’s where they will be tested, and we’ll see how good they are against spin bowling.”

Only, the visiting England team’s temperament and mental strength against the dreaded Indian spin attack was superb. This, after not being put up against any specialist spinners in two out of their three practice matches.

Captain MS Dhoni wanted to take the toss out of the equation after winning the Ahmedabad Test and demanded a pitch that turned from Day One. In other words, he wanted the pitch to play to what he thought was his team’s trump card and almost got the Eden Gardens curator fired for not heeding to his demands. Bafflingly, this was after his team had taken a 1-0 lead in the series on a not-so-much-of-a-rank-turner at Ahmedabad. That match had been won by performances — from young Cheteshwar Pujara, Sehwag and Pragyan Ojha — and not the turf. But it did seem like Dhoni wanted the easy way out for the rest of the series. He was joined in chorus by his teammate, Virat Kohli, who found nothing wrong in asking for turning pitches and used the tit-for-tat argument.

Kohli then took the liberty of using England’s 0-3 whitewash by Pakistan in the UAE as an example of their ineptness in playing spin. “That particular series, there wasn’t much turn on offer but England couldn’t negotiate one quality spinner (Saeed Ajmal).They lost the battle in their heads.”

Only this time, it was first in the head that the battle was won by the Englishmen. England dug deep into the reservoirs of mental strength and always had a man for the situation. In Ahmedabad, even in adversity, there was captain Alastair Cook’s composure that kept them from a bigger embarrassment. In Mumbai, it was Cook’s silky strokeplay and extraordinary temperament, and the talismanic Kevin Pietersen’s dazzling flamboyance in the first innings; followed by the magic of Monty Panesar’s fingers in the second innings that exploited the Wankhede pitch like never before. In Kolkata, Cook defied the Indian bowlers even more and never broke a sweat, literally, while in Nagpur, it was James Anderson’s swing on a pitch more suited for a graveyard and a partnership between an out-of-form Jonathan Trott and debutant Joe Root that came to their rescue.

On the other hand, India can at best boast of Kohli and Dhoni’s gutsy partnership in Nagpur that won India the majority of three sessions. What about the rest of the 12 sessions?

England took their defeat in the first Test in their stride and turned out confidently at the Wankhede — adding a second spinner in Panesar to their bowling attack on Mumbai’s red soil. India, meanwhile, fielded three spinners in what clearly appeared to be intimidation tactics than trying to win the game. The pitch has more twists and turns than a roller coaster; now let’s see you maneuver Ravichandran Ashwin, Ojha and Harbhajan Singh around it.

Only, England did, and how! The host broadcaster’s series advertisement chiding the English team was brought off the air after the defeat in the second Test as the Englishmen rubbed salt into the wound by beating India at their own game — spin.

A humiliating 10-wicket loss wasn’t enough as Dhoni stuck to his guns — and his pitch demands — for the third Test at Kolkata and watched his team lose by seven wickets. Perhaps his logic was right. You don’t want the toss to decide the outcome of the match and would rather both teams have a shot at winning the match, than a high-scoring draw. But the way the Indian team casually approached the games was the worrying factor; the way Dhoni wanted the pitch to win the match for his side was lamentable.

India needs to wake up and smell the coffee. A lot has happened since the day they last held the top spot in the ICC Test rankings: The Occupy Wall Street protest began and ended, tyrannical Libyan president Muammar Gaddafi was captured and killed by his rebel countrymen, the world population crossed the seven billion mark, Queen Elizabeth II marked her diamond jubilee, the “God” particle was discovered, and India experienced the biggest mass revolution since the independence struggle and the largest power outage in world history, to name a few.

India need to realise that they were the best Test team in the world more than 17 months ago; Sachin Tendulkar rescued them from sure defeat against England in Chennai more than four years ago; and the now retired duo of Rahul Dravid and VVS Laxman did so against Australia at Eden Gardens more than 11 years ago. 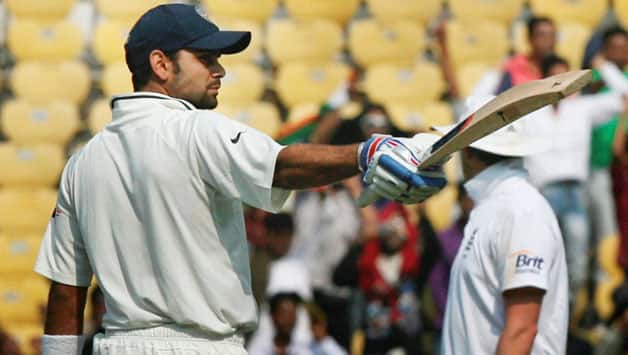 Virat Kohli, who knows that everyone expects him to step into MS Dhoni’s shoes, should stop blaming Lady Luck for losing matches and refrain from relying on external factors to win them © PTI

It is high time the Indian batsmen, in particular, realised that the team’s ever-reliable middle-order is long gone, save for one veteran soldier who is on the verge of calling it a day and probably incapable of single-handedly digging the team out of the ditch.

One of Dhoni’s clichéd go-tos during media interactions after a loss is that the seniors have to start taking the extra bit of responsibility and ease the youngsters in. It is high time that Sehwag and Gambhir realise that they are the seniors Dhoni is talking about. The duo need to back up their talk with performances and stop taking their spot in the eleven for granted. Sehwag, in particular, will be one of the senior most members in the side, even older than Dhoni, when Tendulkar hangs up his boots. He needs to stop relying on divine intervention and riding on previous highs, and start performing like an experienced player.

Dhoni, as captain of the Indian team, must have long realised the boons and banes that come with the job and must stop giving excuses like “We tried our best and that’s what’s important“, “the expectations are too high” and this debacle was not as bad as that one, etc. A poor patch, injuries to your best players, high expectations from fans and other limitations are faced by captains around the world and Dhoni isn’t the only one. It is up to him now how he leads this younger-getting side through the much dreaded transition phase. And if Dhoni is not up for it and wants to concentrate on his own performances, he should set his pride aside and inform the selectors of the same.

Kohli, who knows that everyone expects him to step into Dhoni’s shoes, should stop blaming Lady Luck for losing matches and refrain from relying on external factors to win them. His recent comments and antics (remember the middle-fingered salute to Aussie fans?) spell inexperience, which is a far cry from his performances such as the hundreds at Nagpur and Adelaide under pressure, which make you want to forget his boyish greenness.

Expectations from a team which not so long ago was on the summit of the sport and won the World Cup are definitely high, but what was most disappointing about the latest setback was the lack of intent — physical, not verbal — from most members of the side.

It’s a long, winding road back to the top for India — one that is bound to be filled with numerous internal and external obstacles along the way. The team needs some direction, the right leadership, the proper attitude and most importantly, self-motivation, if they are to reestablish their status as a world beater in the next couple of years.

Are they up for it?

(Jaideep Vaidya is a multiple sports buff and writer at Cricket Country. He has a B.E. in Electronics Engineering, but that isn’t fooling anybody. He started writing on sports during his engineering course and fell in love with it. The best day of his life came on April 24, 1998, when he witnessed birthday boy Sachin Tendulkar pummel a Shane Warne-speared Aussie attack from the stands during the Sharjah Cup Final. A diehard Manchester United fan, you can follow him on Twitter @jaideepvaidya. He also writes a sports blog – The Mullygrubber )