Sehwag, Gambhir, Yuvraj and Zaheer picked for India A: What lies ahead for the experienced quartet?

Sehwag, Gambhir, Yuvraj and Zaheer picked for India A: What lies ahead for the experienced quartet?

Virender Sehwag, Gautam Gambhir, Yuvraj Singh and Zaheer Khan have been selected to play for India A against the West Indies A later in the year. Aayush Puthran tries to decipher the purpose of the selection and its possible outcomes. Will the quartet make merry with their chance and give fresh air to their unsettling careers. From left: Virender Sehwag, Gautam Gambhir, Yuvraj Singh and Zaheer Khan © Getty Images and AFP

Virender Sehwag, Gautam Gambhir, Yuvraj Singh and Zaheer Khan have been selected to play for India A against the West Indies A later in the year. Aayush Puthran tries to decipher the purpose of the selection and its possible outcomes.


It’s like bringing out an old watch from the closet, with its beauty standing out despite layers of dust settled on it. It isn’t the new battery that is killing its vintage charm, even as the sound of the ticking seconds make you cringe, but it is the change of moments where it stands out more than it should, making it look unfit to keep up with the pace of modern times.

The careers of Virender Sehwag, Gautam Gambhir, Yuvraj Singh and Zaheer Khan stand at that very moment, where it stood when the logic of bringing the watch out from the closet was questioned.

For the senior players, the challenge doesn’t lie in just battling the age war, but about competing with an entirely fresh bunch of youngsters who have proved their mettle after performing in every situation they have been thrown into so far. Although it isn’t entirely correct to judge them on the basis of these few performances, it is worse to not continue with the younger lot despite their good work.

Thus, in these circumstances, the selection of the seniors for the series against West Indies A makes things interesting at multiple levels. How tough would it be to ignore Sehwag if he slams the Caribbean bowlers for a century, making them look as hapless as many other international bowlers facing him? How easy would it be to pick any pacer ahead of Zaheer if the left-armer manages to bag a five-wicket haul? Will Yuvraj actually find a place in the One-Day International (ODI) team if he scores a ton and a couple of half-centuries? And what if Gambhir scores a ton or two too at the top of the order? Are the selectors really ready with the solutions if the old vintage charm indeed works its magic? Will the watch be dusted and kept back on the shelf or will it be tried in the rigours of the high-speed life?

While the logic needs to be sorted out, the selectors have presented the out-of-favour quartet with their best possible chance to make a comeback into the national side. It has given them a chance to prove their worth in the side by playing on an even field, alongside a bunch of younger and fitter players.

What they bring to the side, if they were to be selected, is for them to decode. Zaheer’s expertise when India is bowling is a well-known fact and his juniors currently playing in the side have also vouched for it. Sehwag, on the other hand, wouldn’t probably want to think along those lines and rather let his bat do the talking. Yuvraj still retains the fire, much like Gambhir retains resilience.

With their selection, Sandeep Patil and Co have ensured that nobody in the team takes their place for granted. They have rattled the comfort levels in the side and, in all fairness and honesty, made an effort to create a competitive environment.

What remains to be seen is whether the quartet makes merry with their chance and gives fresh air to their unsettling careers. 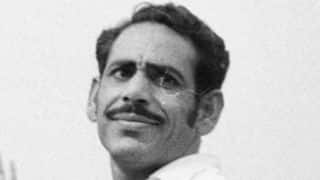 Abid Ali: A multi-dimensional cricketer who was always in the thick of action on the field