Shahid Afridi blitzed his way to a 16-ball 34 against South Africa at Bloemfontein on Sunday, and became the first cricketer to hit 300 sixes in One-Day International cricket. Abhishek Mukherjee narrates the sheer joy of watching Afridi bat. 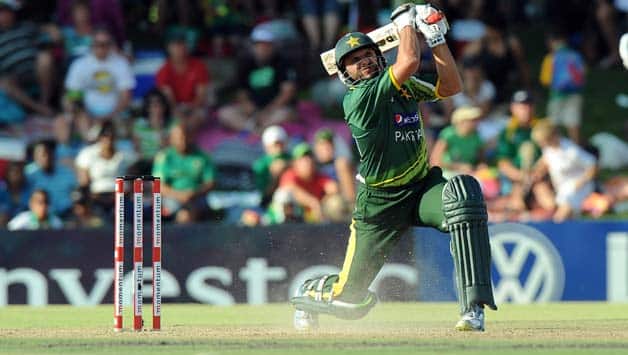 The situation, the team, his score — nothing seems to matter to Shahid Afridi © Getty Images

Shahid Afridi blitzed his way to a 16-ball 34 against South Africa at Bloemfontein on Sunday, and became the first cricketer to hit 300 sixes in One-Day International cricket. Abhishek Mukherjee narrates the sheer joy of watching Afridi bat.

However, there has been, and will be, only one Sahibzada Mohammad Shahid Khan Afridi. I have always been under the firm belief that he is a better bowler than batsman (did you know he is the highest wicket-taker among current cricketers?), but when he gets going with the bat, everyone seems to pale in comparison. Even in matches involving India, the outcome of the match becomes seemingly irrelevant when he is at the crease.

True, there have been many hitters and sloggers as Twenty20 has spread its ominous dark wings of pseudo-entertainment to eradicate the innocent pleasure that cricket once used to be.

Afridi is not a mere slogger, though. For other batsmen, it has always been about the match situation, or about personal records, or at least about the crowd. Not Afridi. He simply bats. Just like that. To him, when a ball is bowled, it is made to be hit — and hit hard.

The situation, the team, his score — nothing seems to matter. Bowlers should simply not be allowed to dominate: bludgeon them. And if he gets out, so be it. It is too innocent to not fall in love with.

And then, there is the sheer power. You bowl short, you pitch up, you bowl length — it does not matter. It has never mattered. The flat ones went for fours; the high ones went for sixes. And the really mighty whack got him 12!

A few hours ago he walked out to bat when the situation was completely hopeless. When Kamran Akmal departed, Pakistan required 168 more from 109 balls with four wickets in hand. There was virtually nothing left in the match. Afridi fans, however, sat glued to their television sets.

He was off with a brace off a full-toss from Ryan McLaren. The very next over he stepped out against Robin Peterson, and hit the ball inside-out to dispatch it over extra-cover for a six, nearly dispatching a patrolling policeman. The next ball was pulled to mid-wicket with uncharacteristic caution — a mode that always makes Afridi fans smile.

Lonwabo Tsotsobe broke the last specialist pair by removing Shoaib Malik in the next over. Afridi merely watched from the other. Rory Kleinveldt ran in from the other end, and as he bounced, the ball flew like a rocket over the rope, one bounce. Had the ground made of something slightly brittle, the shot may well have dented it.

He was probably furious at his failure; anything less than a six has always been a failure for him. The next ball soared over mid-wicket for a massive six. It was his 300th six, way clear of Sanath Jayasuriya’s 270. To put things into perspective, Jayasuriya’s 270 sixes had taken him 433 innings; Afridi’s 300 has taken him 324. The only ones among the current players with 150 or more sixes are Chris Gayle (193) and MS Dhoni (152).

He scraped through for a leg-bye the next ball, and Kleinveldt claimed Umar Gul and Saeed Ajmal in consecutive deliveries. Junaid Khan managed to survive the hat-trick, and Afridi was back on strike.

Tsotsobe attempted a yorker; it turned out to be a low full-toss; Afridi simply smashed it over Tsotsobe’s head, and it crashed into the fence, one-bounce. He drove the next ball to long on, and they — we — smiled again as he turned down a single. Fancy Afridi doing something like that!

Two balls later, Tsotsobe attempted a slower ball; Afridi picked it up; he hit over mid-wicket; the ball landed in the car-park; and Afridi fans all over the world erupted with joy in unison. This was the Afridi of the old! Had he timed it slightly better, it might even have gone out of Bloemfontein!

In the next over, he tried to pull Kleinveldt, and that man Farhaan Behardien — with no sense of drama whatsoever — thought that a brilliant catch was a proper thing to do, and grabbed one at deep-mid-wicket to dismiss Afridi. It isn’t, when “Boom Boom” is batting. It never is.

Who will remember that catch? Who will ever remember that South Africa had defeated Pakistan by 125 runs in a no-contest? Who has remembered anything whatsoever when Afridi has scored a 16-ball 34 with two fours and three sixes? That 34 is worth many a century, and — oh well, I’m possibly going the Neville Cardus way as well.

Rohit Sharma, Dhawal Kulkarni ruled out of Deodhar Trophy tournament due to injuries