Shakib Al Hasan: Bangladesh's national treasure and one of the finest all-rounders in the world

Shakib Al Hasan: Bangladesh's national treasure and one of the finest all-rounders in the world

Shakib Al Hasan, born on March 24, 1987, is unarguably Bangladesh’s finest cricketer thus far and one of the finest all-rounders in world cricket. Within a few years of gracing the big stage, he took the cricketing world by storm, both with his batting and bowling abilities. At 25, he led ICC’s Test rankings and trumped many a stalwart. Karthik Parimal looks back at the career of this sterling all-rounder thus far. 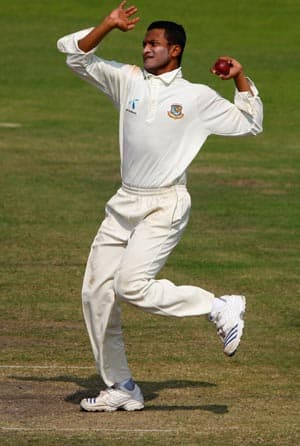 Shakib Al Hasan, born on March 24, 1987, is unarguably Bangladesh’s finest cricketer thus far and one of the finest all-rounders in world cricket. Within a few years of gracing the big stage, he took the cricketing world by storm, both with his batting and bowling abilities. At 25, he led ICC’s Test rankings and trumped many a stalwart. Karthik Parimal looks back at the career of this sterling all-rounder thus far.

Shakib Al Hasan, who turns 26 today, is undisputedly the best cricketer to surface from Bangladesh, not just owing to his talent, but his exemplary conduct as well. One wonders if he would have been a greater force had he played for a stronger team.

A star is born

Shakib made his debut during the final One-Day International (ODI) against Zimbabwe at Harare in August 2006. The series already belonged to the hosts by then, but Shakib played his part in salvaging pride by bowling one of the most economical spells, before chipping in with an innings of 30. Coincidentally, Bangladesh’s current skipper, Mushfiqur Rahim, too made his debut in the same match.

Shakib donned the whites for the first time in May 2007 at Chittagong, against India, and his contributions in that game were minimal. He was roped into the squad because, only a week before his Test debut, and against the same opposition, he had scored a 50 and picked up two wickets in an ODI at Mirpur. That match showed glimpses of the all-rounder he would become in due course of time, but it was to be a while before his first substantial Test performance was penned down.

From the early days of 2008, Shakib was slowly, but surely, emerging as Bangladesh’s mainstay. He registered big scores against lesser nations like Canada and Ireland before and meticulously carried his form against tougher opponents as well. During the tour of Pakistan in April 2008, he finished as the highest run-getter and second highest wicket-taker for his side. Being the weaker team, Bangladesh were whitewashed, but Shakib’s brilliant run raised hopes for his country’s cricketing future.

It was in the winter of 2008, when New Zealand toured Bangladesh, that Shakib’s fame shot through the roof. In a closely-contested Test, in the port city of Chittagong, he all but led his nation to victory. Having restricted the hosts to 245 in the first innings, the Kiwis were bundled out for just 171, thanks to a wizardly spell of seven for 36 from Shakib.

In the second outing, he smashed 71 in just over three hours — despite the rest wilting at the other end — to post 242, thereby setting New Zealand 317 to win. He picked two wickets in the fourth innings at an economy rate on 1.79, but it wasn’t enough as victory was conceded by three wickets. His figures, though, went down in history books as best in an innings by a Bangladesh bowler. Shakib was also the best performer in his unit during that series, in both departments of that game.

Three months later, in January 2009, he single-handedly marshalled Bangladesh to its first tri-series final. In the opening match of that tournament at Dhaka, the home team were surprisingly upstaged by a frail Zimbabwean side and, in order to qualify for the final, now had to trump a formidable Sri Lanka in the last league match. The bowlers did their part, bowling the sub-continent giants out for 147, but victory was far from sealed as Bangladesh lost its first three wickets for just 11 runs. In came Shakib and blazed his way to an unconquered 92, thereby ensuring a win and a berth in the final. As one who didn’t want the added responsibility of being a captain early on in his career, he was forced to don the role during a tour to West Indies in 2009, as Mashrafe Mortaza, the regular skipper, was sidelined due to an injury. It was a weak team that they were pitted against, for West Indies’ first-rate players had been ousted owing to noncompliance. A second-string team greeted Bangladesh and, were duly whipped. The visitors registered their first overseas Test series win, as Shakib was adjudged the Man of the Series for averaging 53 with the bat and 18.76 with the ball.

Despite being apprehensive about taking up captaincy, there was no doubting the fact that he deserved the honour more than anyone else in the team. In the end, it only made sense that he was placed at the helm. Under his tenure, Bangladesh improved considerably in the limited-overs format, although Shakib occasionally blurted out his displeasure with regards to the role. After a loss to Zimbabwe at Dhaka, he said, “I was not prepared to take the job, and I am also not satisfied with my role as a captain. The reasons are numerous, and I cannot detail all of them right at the moment.”

Nevertheless, as a leader, he also rode the crest of the wave. Bangladesh won 22 of its 47 games under his leadership, with his own performance noteworthy; he averages 38 and 37 with the bat in Tests and ODIs, respectively, as a captain.

His biggest moment would have come in Hamilton, against New Zealand, in the only Test in the February of 2010. His maiden Test hundred, that remained elusive for more than three years, was essayed away from home in the sombre confines of Down Under when his side was in troubled waters. Yet again, it wasn’t enough to lead Bangladesh to a win, but his prowess against quality sides, and that out of his comfort zone, drew heavy praise from supporters and critics alike.

He led during the 2011 World Cup, but despite beating England, the overall result was quite disappointing. Thereafter, another disheartening performance against Zimbabwe followed, and this, the administrators conveyed, was the final straw that broke the camel’s back. He was sacked from the role unceremoniously. Disciplinary reasons were also cited, but the bottom line was that the powers that were no longer wanted him at the helm. Shakib, in his own words, was surprised but not shocked. “You see in our country everywhere we make someone scapegoat for any failure because we don’t want to dig deep to find out the real problem and this is no exception. This is our system. We always try to solve problems casually,” he told the Daily Star, a Dhaka-based newspaper, after being plucked.

The rise and rise

The captaincy drama notwithstanding, Shakib kept charging ahead; in fact, the episode spurred him on to bigger things, for his average touched 53 and 47 in Tests and ODIs, respectively, thereafter. His best knock of 144, his second Test century, was penned against a strong Pakistani side in December 2011 and, in the same match, he took a six-for. Nonetheless, Bangladesh were on the losing side this time as well. However, the sterling all-rounder became the first Bangladesh player to score a hundred and take a five-wicket haul in the same Test.

Soon after this knock (which he believes was better than the one at Hamilton against New Zealand) Shakib became the No.1 Test all-rounder in the ICC rankings. He toppled none other than the masterly Jacques Kallis of South Africa, who, until that point, had a firm grip on the position.

During the 2012 Asia Cup, he was instrumental in Bangladesh reaching the final. He was the mastermind behind the falling of India and Sri Lanka during that tournament, and had knocked the wind out of Pakistan’s sails in the finals as well. Yet again, it was the usual story. Despite Shakib’s heroics, Bangladesh lost the series, albeit narrowly. The southpaw was adjudged the Man of the Series for scoring 237 runs at 59.25 and scalping six wickets. It was after this historic game that his emotional side came to the forefront; his devotion, for the game and his nation, finally revealed.

It is unfortunate that injuries have hampered his steady progress, but there is little doubt that this champion all-rounder will soon return to make hay. Perhaps he would have fared better with lesser burden on his young shoulders, but with age on his side, he could well be the stalwart who rewrites the script of Bangladesh cricket in a few years’ time.