224 runs added by Shakib and Mahmudullah today, the highest for any wicket for Bangladesh in ODIs. They went past 178, added by Tamim and Mushfiqur for the 3rd wicket against Pakistan at Mirpur in 2015.

0 net run rate of Bangladesh after 3 matches. They have scored 573 runs in 97.2 overs and have conceded the same. Australia s net run rate is also the same. However, if the Australia-England match does not produce a result, Bangladesh will go through by virtue of more wins.

3,892 days between Bangladesh s two wins in Champions Trophy. Their only other win came on October 13, 2006 against Zimbabwe. Shakib Al Hasan and Mashrafe Mortaza are the only ones to have played both matches.

2 wins for Bangladesh at Cardiff in 2 matches. They had beaten Australia in 2005 and now New Zealand in 2017. They won both matches by 5 wickets. Mortaza is the only one to have played both matches.

2 instances of two Bangladesh batsmen scoring hundreds in the same ODI. The previous instance was against Pakistan at Mirpur in 2015, when Tamim Iqbal scored 132 and Mushfiqur Rahim 106. Shakib (114) and Mahmudullah (102*) provided the second instance today.

4 instances of two batsmen scoring hundreds in the same innings in Champions Trophy. India (2002), West Indies (2006), and Australia (2009) have done it before all of them against England.

224 runs added by Shakib and Mahmudullah today, the highest for any wicket for Bangladesh in ODIs. They went past 178, added by Tamim and Mushfiqur for the 3rd wicket against Pakistan at Mirpur in 2015.

2 higher partnerships than Shakib and Mahmudullah s 224 against New Zealand in ODIs. Sachin Tendulkar and Rahul Dravid had added 331 at Hyderabad in 1999-00, while Aamer Sohail and Inzamam-ul-Haq had 263 at Sharjah in 1994. Both stands were for the 2nd wicket.

2 higher partnerships than Shakib and Mahmudullah s 224 for 5th wicket in ODI history. JP Duminy and David Miller had added 256* against Zimbabwe in the 2015 World Cup, while Eoin Morgan and Ravi Bopara added 226* against Ireland in 2013.

1 higher partnership than Shakib-Mahmudullah s 224 in Champions Trophy. Shane Watson and Ricky Ponting had added 252* against England at Centurion in 2009.

15 runs in Champions Trophy for both Guptill and Kane Williamson. They are joint-4th for New Zealand, at par with Brendon McCullum. Fleming (441), Nathan Astle (344), and Daniel Vettori (299) hold the top three spots.

18 wides conceded by New Zealand today, their most against any side in Champions Trophy. Their previous most was 15, against USA in 2004.

4 consecutive fifties for Williamson in Champions Trophy. He is the first cricketer to achieve this. He had scored 67 in his last match in 2013 and has started this edition with 100, 87, and 57.

3 run outs for Williamson in his last 4 ODI innings. It started with the South Africa match at Auckland. He also got run out in the Australia and Bangladesh matches in the ongoing tournament, missing the England match in between.

345 runs for Williamson in Champions Trophy, the 2nd-most by a New Zealand cricketer. Stephen Fleming leads the way with 441. Williamson went past Nathan Astle (344) and Daniel Vettori (299) today. Martin Guptill moved to 319 as well, just behind Astle.

4 fifties in Champions Trophy for Williamson, the most for New Zealand. He went past Fleming and Craig McMillan today, both of whom have 3 apiece.

3/13 figures of Mosaddek Hossain today, the best for Bangladesh in Champions Trophy. The previous best was 3 for 18 by Shakib, against Zimbabwe in 2006.

2,741 runs added by Williamson and Ross Taylor in the partnerships between them. They went past Guptill and Brendon McCullum (2,737). Leading the way are Astle and Fleming (3,814).

12 catches by Ross Taylor in Champions Trophy, the joint 2nd-most. Mahela Jayawardene leads the way with 15, while Sourav Ganguly and Dwayne Bravo have 12 each.

3 fifty-plus scores for Kane Williamson in Champions Trophy. He equalled the New Zealand record of Craig McMillan and Stephen Fleming. Of them, only Williamson had converted one to a hundred.

286 runs in Champions Trophy for both Guptill and Williamson. They are joint-4th for New Zealand, at par with Brendon McCullum. Fleming (441), Nathan Astle (344), and Daniel Vettori (299) hold the top three spots. 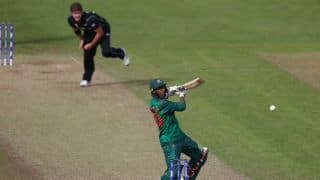