It’s not always the big names that win you matches. Sometimes, a balanced group consisting of focussed individuals can get together and put up a performance that will leave even the good teams baffled. 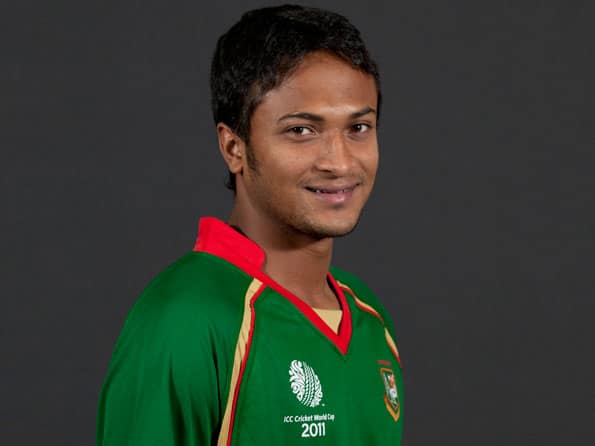 After being adjudged “Man of the Series” in both the Bangladesh Premier League (BPL) and the recently-concluded Asia Cup, its shocking to find the in-form Shaikb Al Hasan not getting a place in the Kolkata Knight Riders’ playing eleven © Getty Images

It’s not always the big names that win you matches. Sometimes, a balanced group consisting of focussed individuals can get together and put up a performance that will leave even the good teams baffled. The Rajasthan Royals (RR) proved exactly that in their game against the star-studded Kolkata Knight Riders (KKR) on Sunday. In fact, a similar RR team led by Shane Warne in the first season of the Indian Premier League (IPL) went on to show that such an unit can go the entire distance and emerge supreme.

On the other hand, KKR is one side which hasn’t qualified for the final even once in the last four seasons, despite having a number of match-winners at its disposal. In the first season, KKR began well, but their intensity began to subside during the later stages of the tournament. Thereafter, they hardly looked threatening in the second and the third editions, managed to reach the semi-finals in the fourth, and are now off to an unimpressive start in the fifth. Despite making drastic changes, a flurry of victories continues to elude this promising side. Surely, players like Gautam Gambhir, Yusuf Pathan, Jacques Kallis, Brendon McCullum etc, have the ability to win games single-handedly. Their bowling too is by no means on the weaker side. What then must KKR do to turn the tide in its favour?

Perhaps KKR is not getting their balance right or, perhaps, it’s just the case of players not firing. Looking at KKR’s tactics in this edition of the IPL thus far, it’s difficult to comprehend the exclusion of ace all-rounder Shakib Al Hasan from the side. Agreed, it’s a difficult proposition to select just four overseas players, especially when you have superstars like Jacques Kallis, Brendon McCullum, Brett Lee, Ryan ten Doeschate and Shakib in the side, but here is a man who is in the form of his life and is riding high on confidence after being adjudged the Man of the Series in both the Bangladesh Premier League (BPL) and the recently-concluded Asia Cup.

In the Asia Cup, Shakib scored 237 runs in four matches at an average of 59.25 and took six wickets with the ball. His performance in the BPL will probably give an idea of how efficient he can be in the Twenty20 format. He scored 280 runs in that tournament at an average of exactly 40, and picked 15 wickets at an outstanding average of just 19.93. He should have been any captain’s first choice given the conditions and his current form. But to see him fail to make the cut in the first two matches has left many perplexed.

Sunil Narine and Marchant de Lange are no doubt talented cricketers, but one would expect Shakib to get the nod ahead of them, at least on the basis of recent performances. Narine had a decent outing in the recently concluded One-Day International (ODI) Series against Australia where he foxed many batsmen with his off-breaks, and hence Gambhir must have been inclined to try him out. However, in Shakib, KKR would not just have had an excellent bowling option, but also a batsman who can contribute handsomely and strike the ball a long way. It is possible that Shakib wasn’t considered because Kolkata were already equipped with a left-arm spinner in the form of Iqbal Abdulla, but Shakib’s experience with the ball and temperament with the bat would have perhaps made a difference.

Shakib also has the ability to mastermind an escape when the team is in troubled waters, and this was demonstrated more than once during the Asia Cup against top sides like India, Sri Lanka and Pakistan. He currently holds the top spot in the list of all-rounders in both the Test and the ODIs, and this is a testimony of his dexterity. Therefore, it is surprising that a player of his stature hasn’t been picked to play considering his consistency and the kind of good knick he is in. Also surprising is the fact that the KKR skipper didn’t want to comment on this issue.

A loss in the first two games of any tournament does not augur well. If KKR are seeking resurgence from here on, they will have to put forth a balanced side; and what better way to induce stability than by including a skilled all-rounder like Shakib. KKR has the ammunition to go the distance, but they need to start making the right moves for their dream to take shape. They have adept players like Kallis, Lee and skipper Gambhir himself, and Shakib’s addition to the side may just prove to be a shot in the arm.