When Australian captain gave the ball to Warne for the first time with Gatting on strike, many perceived it as the young bowler was being thrown to the wolf.

There are many awe-inspiring incidents that have taken place on 22 yards of the cricket field, in game’s 139-year old history. Yet few great performances stand apart and have over the years gained the status of being ‘the best ever’. When the legendary Australian leg-spinner and unarguably the greatest exponent of his art, Shane Keith Warne took a run-up to bowl his first ever delivery in Ashes on this day 23 years ago; he may not have known that it will walk straight into the cricketing folklore. He bowled what has now become ‘the ball of the century’ to English batsman Mike Gatting, who had no answer to it. He succumbed to it, and as they say, the rest is history. READ: Shane Warne controversies: 9 times the legendary leggie made headlines for non-cricketing reasons

There was a sharp contrast in both the teams’ morale coming into the Ashes. Australia had won two of their last four series and drawn one; and importantly, one of the wins came in the Indian subcontinent against Sri Lanka. They had a more or less settled unit. England, on the other hand, were coming on the back of a disastrous tour of India, where they had a 3-0 drubbing by the hosts. Moreover, England’s problems were compounded by poor selection, and the side did not have a good team composition. Over the six Tests of the series, nine of Australia’s cricketers played all six tests, while England used 24 players, including seven debutants. This fact itself is a testimony to how the two teams stacked.

The first Test was to be played at Old Trafford, Manchester. Both the teams had two debutants each: Michael Slater and Bendon Julian for Australia and New Zealand-born Andy Caddick and off-spinner Peter Such for England. The Old Trafford pitch has traditionally been slow and has assisted spinners. Perhaps, for the same reason, England went in with two spinners Such and Phil Tufnell. Australia had only one: Warne. The English spinners vindicated their skipper’s call, as they shared eight wickets between them to bundle out Australia for 289 after they were put in to bat first. Mark Taylor (124) and Slater (58) were the main contributors as the remaining batsmen fell to the spin.

England started well as skipper Graham Gooch and Mike Atherton added 71 for the first wicket before Merv Hughes got Atherton caught behind. This brought Gatting to the crease. He had an experience of 72 Test and a reputation of playing well against the spinners. The spectators gathered at the Old Trafford expected him to bully the 23 year-old Warne, who was a reasonably unknown commodity for the English fans. He had played just 11 Tests by then; and with the use of video-analysis and internet still years away, there was no way English batsmen could know what he was capable of.

When Australian captain gave the ball to Warne for the first time with Gatting on strike, many perceived it as the young bowler was being thrown to the wolf. Nevertheless, with a customary glance at the field placement, young Warne started his usual slow run-up. He walked just a couple of paces before jumping into his delivery stride and rolling his arm over to produce a leg-break. The ball drifted to the right and pitched well outside the leg-stump of Gatting, who tried to get his left leg towards the pitch of the ball to counter the turn. However, the ball spun massively and went on to beat Gatting’s pad and bat before hitting the top of the off-stump.

It seemed for a moment as if the world had fallen silent before wicketkeeper Ian Healy’s roared in joy. Within moments, Warne was surrounded by his teammates who all had realised that they just witnessed something special. But Gatting stood still in utter disbelief, refusing to accept the reality before dragging himself off the ground. Richie Benaud’s television commentary aptly summed up the situation: ‘Gatting has absolutely no idea what has happened to him — and he still doesn’t know.’ The crowd too had no idea at first, but with replays of that special delivery being played on the giant screen, it too got into the act slowly and started discussing it.

Though it was just the second wicket to fall in England’s first innings, the magical spell cast by Warne’s delivery had a long-lasting impact on the hosts, who never recovered in the match as well as the series. Warne took seven more wickets in the match and helped Australia win by 179 runs. He was rightly adjudged the Player of the Match. Australia went on to win the six-match series 4-1. There was more misery in store for England as their skipper Gooch resigned after the series was lost in the fourth Test. Atherton lead them in the next two Tests and restored some pride by winning the last one.

The careers of the two central characters of this incident Warne and Gatting went contrastingly different way from there. Gatting, who was already 35, played a handful of Tests more before calling it a day. Warne, on the other hand, went on to become the greatest leg-spinner of all time, as he ended his career with a record 708 wickets. Though this record was later broken by Muttiah Muralitharan, his Ashes record of 195 wickets still stands. He also won seven out of the eight Ashes he played in. The most significant impact Warne’s ‘ball of the century’ had on the game was that it resurrected the dying art of leg-spin. In a world obsessed by fast bowling, Warne came as a messiah. His legacy still lives on as the likes of Adil Rashid, Adam Zampa and others are keeping the flag flying high.

This article first appeared at CricLife.com 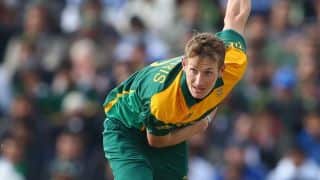