On his day, Sherwin Campbell had the ability to rip-open any opposition attack. But at the same time was excruciatingly inconsistent. Bharath Ramaraj looks back at the mercurial batsman from the Caribbean Islands. 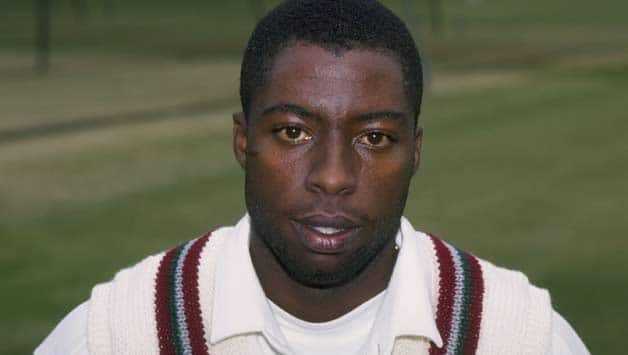 On his day, Sherwin Campbell had the ability to rip-open any opposition attack. But at the same time was excruciatingly inconsistent. Bharath Ramaraj looks back at the mercurial batsman from the Caribbean Islands.

When the 24-year old, Sherwin Campbell made his Test debut in 1994-95 against New Zealand, there were ominous signs that the once mighty West Indies cricket empire was about to spiral into a protracted slump.

Yet, when Campbell held firm against some inspired bowling by England’s new sensation Dominic Cork at the manicured lawns of Lord’s cricket ground in 1995, it seemed for a moment that West Indies have found a rock-solid batsman who had solved the opening conundrum.

However, West Indies’ revolving-door policy and Campbell’s exaggerated shuffle across the stumps against both pacers and spinners alike resulted in a topsy-turvy career that promised much, but delivered little.

If we turn the clock back to Campbell’s early days, he was coached by his cricket-obsessed father, Lester. He soon followed in the footsteps of legendary fast bowler from Barbados, Malcolm Marshall by captaining Pine Primary school’s Under-11 team. As a young boy, Campbell was also inspired by his heroes Gordon Greenidge and Desmond Haynes toying with opposition bowlers at will.

Campbell came through the ranks by playing Under-19 ‘Tests’ for West Indies in the late 1980s. In the 1989 Test series against Australian young cricketers though, in comparison to his highly rated opening partner, Paul Persaud, he struggled to leave an indelible mark.

Campbell still showed that he had burgeoning potential as an opening batsman with a crackerjack knock of 71 on a spicy track at Bridgetown, Barbados — against an attack that comprised Damien Fleming, Brendon Julian and Shane Warne.

Campbell makes his presence felt in the international arena

It was his breakthrough season in the Red Stripe Cup in 1993-94 when he accrued 547 runs at an impressive average of 54.70 for Barbados which propelled him into the national reckoning. The following year, Campbell also played Lancashire league matches, which in turn helped him to hone his defensive skills.

With Greenidge already retired from international cricket and Haynes surprisingly overlooked for the 1994-95 tour to India, Campbell was given the chance to make his One-Day International (ODI) debut against India at Chennai.

He had to wait a little longer though, to make his Test debut, as the diminutive Stuart Williams and the seasoned veteran Phil Simmons were picked ahead of Campbell during the three-Test series in India.

Campbell finally made his Test debut in 1994-95 at Lancaster Park, Christchurch against New Zealand where he steadied the ship with his patient-vigil at the crease on a tricky wicket and took them to safe waters caught the eye of keen cricket enthusiasts.

In the next Test match played at Basin Reserve, Wellington against New Zealand, he scored a scintillating knock of 88 from a mere 139 balls. His thrill-a-minute innings was laced with 11 boundaries and two humongous sixes. For a cricket romantic, some of those debonair square-cuts from his flashing blade were reminiscent of Greenidge’s God-like-genius power-hitting during his heydays.

In the following Test series against the formidable Australia, Campbell was dropped after flopping miserably in the first Test at Barbados.

During the West Indies’ tour of Old Blighty in 1995, Campbell earned a recall into the set-up. By amassing 454 runs during that Test series in England, Campbell made the selectors eat humble-pie.

On that tour, he blended canny judgment outside his off-stump with sparkling strokeplay and never flinched while facing up to a seam attack that was ideally suited to seam/swing conditions in England. He won fulsome praise and filled columns in the paper for the way he stood up to England’s bowlers in adverse conditions.

The crowning glory of Campbell’s Test career soon arrived when he essayed a priceless double hundred against New Zealand in front of his adoring home crowd at Barbados in 1995-96. In spite of Robert Kennedy, who looked more like a giant from the imaginary Gulliver’s world of Brobdingnag, showing some promise, New Zealand’s attack in that Test match heavily depended on the unpredictable Danny Morrison. Yet, one can’t take the credit away from Campbell’s heroic efforts which lasted almost eight hours. It was an innings which gave ample proof of Campbell’s versatility as a batsman. A few months later, West Indies travelled Down Under and that was the first time when one noticed opposition bowlers ruthlessly trying to catch Campbell on the shuffle to trap him leg-before the wicket or shatter his timber.

With gladiatorial intensity and by superbly manoeuvring the ball into gaps, Campbell though, essayed a valiant century albeit in a losing cause at the Gabba against Australia in the first Test in November 1996. At Sydney, in the second Test on a treacherous turning track suited to Wizard of Oz, Shane Warne, Campbell stood tall among the ruins in the first innings.

One also fondly remembers Campbell’s defiant-rearguard century against Victoria in a First-Class game during the tour of Australia in 1996-97. For that match, Victoria picked a strong attack consisting of names like Paul Reiffel, Damien Fleming and Ian Harvey.

But most of the times, Campbell couldn’t cope up with the sustained pressure employed by Australian bowlers. Even a part-timer like Greg Blewett troubled him by zooming it in on his stumps and shaping it back into the right-handed batsman in the first Test at the Gabba. 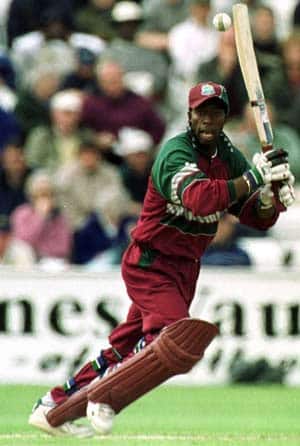 Campbell axed from the side and his subsequent comeback

It was after he struggled to come to grips with Dean Headley’s seam bowling on a fourth stump channel in the 1997-98 Wisden series that West Indian selectors finally axed him from the side. By then, West Indies’ selectors faith in Campbell had started to wear thin, still it didn’t make much sense that West Indies continued to show blind faith in the Nevis batsman — Williams.

When questioned about why Williams was preferred over Campbell during the West Indies’ tour of South Africa in1998-99, Brian Lara could only give an unconvincing answer, he said, “The selectors thought it best that Williams should go to South Africa to see if he can force his way back.”

For a while, Campbell meandered in the lower leagues of professional cricket, but he soon scripted his way back into the West Indies’ set-up for the series against Australia with a strong domestic season for Barbados in 1998-99.

With Campbell knocking at the selection committee’s door with resplendent performances in domestic cricket, West Indies’ selectors had no other choice but to go back to him. When the likes of Suraj Ragoonath from Trinidad and Tobago starts to open the batting for the once mighty West Indies, it is crystal clear that the cupboard is pretty bare.

By the dawn of the new century, the aggressive willow-wielder from Barbados, Campbell, took his game to compelling peaks with his knock of 170 in the first Test against New Zealand at Hamilton. With unrestrained bravado, he smashed a good New Zealand attack to smithereens.

As the ball kept on ricocheting of the boundary boards, in front of Campbell’s coup de main even a fine captain like Stephen Fleming had a befuddled look on his face. Incidentally, his wondrous century at Hamilton was the last time Campbell reached the three-figure mark in Test cricket.

Unfortunately, Campbell was terribly inconsistent as a batsman. After his awe-inspiring hundred in New Zealand, in his next five Test innings he amassed only 54 runs and came under heavy criticism from Caribbean fans and experts for his failures.

In Australia in 2000-01, Glenn McGrath, Jason Gillespie and Stuart Macgill combined to whitewash the West Indies 5-0. It was the series in which every batsman from the Caribbean Islands including Campbell looked clueless against an all-time great team. By then, Campbell’s Test career had reached the crossroads and was soon dropped.

Campbell also played as many as 90 ODIs, but even in the abridged version of the game, he couldn’t make his mark. Despite being a swashbuckling batsman, he ended up with a disappointing strike rate of 59.25 in one-day cricket.

He continued to play First-Class cricket until the 2004-05 season for Barbados, before finally being dropped for the first match of 2005-06 season against Guyana. When unheralded opening batsmen in Wayne Blackman and Dale Richards were preferred to Campbell by Barbados’s selectors for the match against Guyana, it was a clear indication that curtains were drawn on his distinguished First-Class career.

Nowadays, Campbell is a successful coach of West Indies’s women’s team. Under his able stewardship, West Indies made the final of cricket World Cup held in India in 2013. It was largely the inexperience of playing at the big stage that saw West Indies lose their final to Australia [Southern Stars].

When Campbell first played for West Indies, there were mountains of expectations of him doing well in the Test arena. Yes, his career consisted of some noteworthy crests, but it is fair to say that it turned out to be a tale of unfulfilled promise. He played 52 Tests and aggregated 2,882 runs at a very modest average of 32.38. It is inexplicable to even imagine that innumerable cricketers from West Indies’ with immense potential have disappeared into the oblivion so quickly.