Shikhar Dhawan has been going through a lean patch in recent times.

Lack of confidence is not a worry for Shikhar Dhawan but the inability to tone down his aggressive instincsts, while going for his strokes may be an issue. Abhijit Banare elaborates on Dhawan’s dry spell with the bat.

There is a jittery feeling which every batsman identifies when he walks out to bat knowing that he is not in form. When you are not in form, you lose the battle in the mind even before you face the delivery. But the dilemma is completely different, if you walk out to bat with confidence despite not having enough runs behind you. India’s Shikhar Dhawan is currently batting with that mindset. Dhawan might well be aware that the intense mental pressure to score runs can erode his confidence too.

Every time, he walks out to bat, there’s absolutely no sign of nervousness on his face. Even the short balls are faced with a wry smile. But that smile won’t instill confidence of the selectors, if the runs aren’t scored on board and more so, if you are in charge of giving a good start to the team.

Dhawan’s form is an interesting challenge not only for the selectors, but for the man himself. Since the sensational Test debut at Mohali, Dhawan has failed to register a single half-century in his next seven innings. And since the overseas One-Day International (ODI) series in South Africa, he has crossed the 30-run mark just once in six innings. The dip in performances isn’t long enough for his place to come under threat. In fact, in some of these innings, Dhawan started off well and fought hard to keep his wicket, only to squander it midway through his innings. The maturity in his innings is visible but the temperament is still a question mark. In the Tests in South Africa, he has been deliberately targeted by the short balls and Dhawan, instead of choosing to leave it alone, used his confidence to have a go at it. And hence, too much of confidence has led to the downfall.  However, as we speak, he has carved his way to a fine knock in the second innings against New Zealand, as India look to chase down a monstrous target.

Unlike Raina and Yuvraj who have presented technical faults, Dhawan just needs to show good temperament and pick the right ball to go after. And the Test match at Auckland against New Zealand is the perfect opportunity to do so. In the second innings, he has shown judicious judgment and eased into his drives, whenever there has been an opportunity on offer. He also has a perfect partner in Cheteshwar Pujara who can grind the opposition down with his patience. The fact is, just one big innings overseas and the opener could well find his rhythm back. 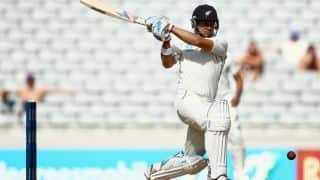