Shikhar Dhawan erupted in an explosive debut Test hundred on March 16, 2013. Abhishek Mukherjee writes on how this has brought general elation to the owners of the tobacco companies all over India 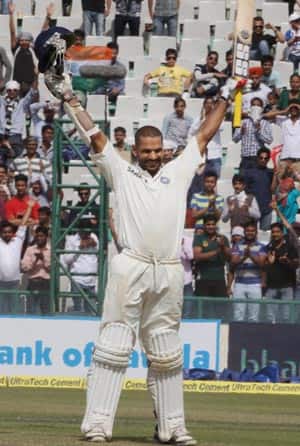 Shikhar Dhawan erupted in an explosive debut Test hundred on March 16, 2013. Abhishek Mukherjee writes on how this has brought general elation to the owners of the tobacco companies all over India.

It has been a lean phase for the tobacco company owners all over the country. Several years back a law was passed banning the use of tobacco in public places including restaurants, bars, bus-stands, and even schools — the general breeding-ground for potential smokers all over the country. Not only that, the sale of tobacco products became prohibited within a certain diameter of all educational institutes.

The law had come as a major blow to the tobacco-sellers all over India at all levels — affecting manufacturers, wholesalers, and retailers in one way or the other. Even when they had prayed for a turnaround, the Government struck again, this time making it mandatory for any movie to show the phrase ‘Cigarette smoking is injurious to health’ or an equivalent before any Indian movie.

Additionally, the same phrase needed to be displayed every time a person uses any tobacco product on screen, even on television. The Government had even wanted to put up the same sign during iconic songs like the iconic beedi jalaile, but had, for some reason, decided to show some mercy.

The law had spelt doomsday for the tobacco industries as sales went down at an alarming rate. Owners of the big brands even contemplated leaving the country in pursuit of faraway lands full of hard-working, honest, and resilient tobacco users.

And then, on the third day of the ongoing India-Australia series, they finally found their messiah. Shikhar Dhawan smashed record after record as he scored a sparkling hundred on debut — bringing hope to an industry that had been languishing in the darkness of misery and were on the verge of giving up.

For the first time, a man named after a reputed gutkha brand had managed to score a Test hundred — and to manage something of the stature Dhawan has on March 16, 2013. They have found their hero, their potential blue-blooded pin-up boy who will bring about the much-awaited turnaround.

ITC Chairman and CEO Yogesh Chander Deveshwar, winner of the Padma Bhushan, has expressed his elation at Dhawan’s achievement. Educated by the fact that Dhawan is a brilliant player of the hook, ITC has decided to felicitate Dhawan with the prestigious The Hookah — the first of its kind.

“Dhawan has been a real boon to the industry”, said Yogesh in a press conference earlier on Saturday. “I hope he scales greater height and sets new standards for the country, thereby helping our industry to flourish.”

Ex-umpire Mark Benson, an earlier contender of the award, was not available for comments; sources suggest that he had hidden himself behind the hedges in his backyard.