Shikhar Dhawan’s debut innings was nothing short of champagne cricket — heady, intoxicating, mindboggling. Arunabha Sengupta looks back at the strokeplay of the debutant that flowed in a deluge of delight. 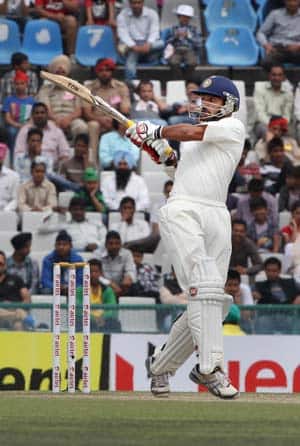 The drives flowed in gushing spirit, the feet danced down in nimble gaiety. The pace bowlers were dispatched with the timing of happy hour, and when spinners came on the footwork and flow of stokes mingled in an exotic cocktail © PTI

Shikhar Dhawan’s debut innings was nothing short of champagne cricket — heady, intoxicating, mindboggling. Arunabha Sengupta looks back at the strokeplay of the debutant that flowed in a deluge of delight.

Shikhar Dhawan’s career was uncorked with the resounding pop of a champagne bottle. And the effervescent strokes bubbled forth in sparkling jolts.

It was fresh, it was fun and it was fabulous.

The drives flowed in gushing spirit, the feet danced down in nimble gaiety. The pace bowlers were dispatched with the timing of happy hour, and when spinners came on the footwork and flow of stokes mingled in an exotic cocktail.

A couple of short balls were forced with reassuring pull shots, but it was when the ball was up there that the show turned heady, intoxicating. It was champagne cricket that flowed unabated between lunch and tea. And all that came with the slice of left-hander’s natural elegance firmly wedged in the corner.

From the moment Peter Siddle was punched past cover, there was no ebb in the flow of runs. The covers were crowded with more and more Australians added as a hastily constructed dam to thwart the deluge of drives, but runs were leaked — not in a trickle but a cascade.

The 50 was reached in 50 balls, with as many as 12 boundaries. And oblivious to all tenets of Test cricket and dictums of debut, Dhawan accelerated further. Hardly can one choose between the brilliance of his scintillating strokes, but if one has to be picked it was the drive off Nathan Lyon – off a perfectly good delivery that deserved respect. Dhawan stepped out on his youthful toes, reached for it and threaded it through three men in the covers. It oozed class and confidence.

And then there was the moment when soaring spirit was stirred with a growing strain of inebriated madness. Dhawan, on 73, knelt down to Xavier Doherty and reverse-paddled him past the ’keeper. Test cricket was not meant to be played this way, certainly not by a debutant galloping towards his century.

However, the breeze of fresh air, that seemed to accompany the newcomer from the moment he stepped out, carried him through this extraordinary liberty and the ball rebounded off the advertising hoardings.
The first blemish occurred when he drove at a reversing Siddle delivery. It flew past the diving gully for a boundary as fortune steadfastly stood up for the brave, taking him to 98. And the bravado continued as he stepped out to the fast man off his next delivery, picking up a single to deep point.

Off the next ball, he dabbed and ran, finishing his frantic scamper with a full length dive. The throw came in from cover, but fortune now showered the bounty of bonus on this brave lad. The shy at the stumps went wide and resulted in five. The young man rose with a delighted smile under the curious moustache, a beaming dazzle worth travelling miles to see. The hundred had come off just 85 balls, with 21 fours and a five — the fastest century on debut in terms of balls — a complete hundred between lunch and tea. The run-rate remained steadfastly over five an over. It was scripted in the fumes of fantasy.

The post-tea session saw Dhawan continue on his magical journey. With the hundred already bottled and labelled as an unforgettable offering of fizz and sparkle, he added the third dimension to his strokes.The balls were now loftedin the air. Lyon was hoisted over cover for four and hit over his head for six. The bowler had beaten him in flight on the second occasion, but yet the ball ended beyond the sight screen. The Australian fielders were drenched in this shower of shimmering strokeplay.

And then came the delightful punch of three boundaries off Mitchell Starc in one over. Through the covers and backward point, two drives off the front foot and the thirddismissed off the back. It transcended expectations and belief.

When Lyon pitched up he was lofted. And when he dropped it short, the fine late cut was unfurled — a portion of elegant unctuous added to the snazzy spritzig. The 150 came up from 131 balls, with 29 boundaries, one five and a six.

At the end of the day he stood at 185 from 168 deliveries, Two hundred and eighty three without loss is not a bad score at the end of the day, and does seem to be powered by the winds of change at the top of the order. At the other end, Murali Vijay was not exactly stonewalling, with ten boundaries and two sixes in his 83. But, Dhawan was faster by two times and a half.

All sorts of records stand in front of him, waiting to be washed away as he resumes his exhilarating flow on Sunday.

Towards the end of the day on Saturday, his frantic pace slowed down, if only slightly —but for the occasional six that his fancies demanded as effects of hangover of the earlier splurge.

The ebullience, though, rode on a sound head that plunged in the stopper as the day dwindled to an end, to keep the foam and froth intact for the morrow. And when it bursts forth again as he walks out to bat, it can soar to all sorts of heights.