In an exclusive interview, Dhawan speaks about leading India A, upcoming South Africa series, and playing under Dhoni and Kohli.

From being the top scorer in ICC Under-19 Cricket World Cup 2004 to scoring a scintillating 187 on Test debut to being named as the Player of the Tournament in ICC Champions Trophy 2013 to a powerful 115 in the first Test against New Zealand at Auckland to taking over the duty of an opener from likes of Virender Sehwag, Gautam Gambhir and all, Shikhar Dhawan has come a long way. In an exclusive interview to CricketCountry’s Sudatta Mukherjee, Dhawan speaks about leading India A against Bangladesh A in the unofficial Test, the upcoming South Africa series, his favourite cricketers and sportspersons, his special innings and playing under MS Dhoni and Virat Kohli.

CricketCountry (CC): You have captained teams in the past and now against Bangladesh A. Is it a role you see yourself fulfilling for India in the future?

Shikhar Dhawan (SD): I haven’t really thought about that. Whatever opportunity they give me, I just try to do my best and enjoy that opportunity. Future matter can be taken care of in future.

CC: You have opened with a lot of people, in Ranji Trophy, IPL, and international cricket. Who has been your favourite opening partner so far?

SD: I enjoy batting with everyone. I am lucky to play with all of them because I get to observe different types of character and play with them. If I talk about Murali Vijay or Rohit Sharma or even Ajinkya Rahane, all of them have different traits and I am lucky to have opened with so many of them. You gain a lot of experience when you play with such different personalities. It will be very hard for me to say who the best is, because everyone has their speciality.

CC: The South Africa series will be huge. You have played with Dale Steyn before. What are your plans to counter him?

SD: Just to play with my bat (laughs). On a serious note, nothing: I have played against them, I have played with them. Of course they are one of the best sides in the world and it is always going to be a challenge for us. The good thing is we are playing in India and will have home advantage. I am yet to see the bowling videos. Once I go for the preparatory camp and once the series starts, I will watch the videos and will observe their strengths and weaknesses. According to that, I will make my plans.

CC: South Africa have not lost an away series in 9 years. Do you think India should make pitches suiting the Indian bowlers or let things be as they are?

SD: I think there is always a home advantage, like we have spin-friendly pitches. Even when we played Australia and West Indies, we played on turners. I guess it is like that because it is very hot in India. The wicket will hold for two days before the pitches start turning. That is the nature of wickets in India. I think we will get to see the same situation even this time.

CC: How different is the dressing room atmosphere under Dhoni and Kohli?

SD: It is a great honour for me to play under [MS] Dhoni-bhai because he is one of the greatest Indian captains and a great human being. I have played under him for two-three years now. Dhoni-bhai has always been the Captain Cool. Virat, on the other hand, is an aggressive captain but in a good way.

Virat is one of the fittest sportspersons and always emphasises a lot on fitness. He sets an example for the boys and pushes us to be fit at all times. Virat has led the team to a successful Test series win now. Our team is very positive and it is like a big family.

CC: How much do you enjoy bowling? You bowled quite a lot in England, but not much after that.

SD: It is more of an enjoyment. We have good bowlers. It is okay as long as I enjoy it. I have never really concentrated or focused so much on bowling. Yes, I do like to bowl sometimes in the nets. I enjoy doing that. If I get an opportunity in the future, then I am sure I will do it.

CC: You’re one of those ambidextrous cricketers who bats left-handed and bowls right-handed like Sourav Ganguly. We all know about Ganguly batting left-handed to emulate his brother. What’s your story?

SD: I was totally left-handed. However, when you are young and your teachers have some different thoughts — they forced me, scolded me to write right-handed. That is why I can use both hands. I am naturally left-handed. Whatever God has gifted me, I appreciate it. I enjoy being a leftie.

Before that I was not scoring runs in the series… I was not performing well. So my focus was to spend as much time at the wicket as possible and score runs for my team

CC: One of the best fourth-innings performances by an Indian opener was your 115 in the first Test against New Zealand in 2014, chasing 407. What was going on in your mind during that knock?

SD: All I was thinking at that time is that I need to be at the crease as long as I can. Actually, before that I was not scoring runs in the series, if you remember. I was not performing well. So my focus was to spend as much time at the wicket as possible and score runs for my team. My team would benefit from that, I would benefit in return and all of us would be happy. I was thinking all that. I was playing the way the wicket demanded.

CC: In the first Test against New Zealand in 2013-14 you looked like aiming for a win despite a big target. Then we saw Kohli do the same in Adelaide against Australia. Do big targets in Tests matter anymore?

SD: Of course big targets matter. If you have to chase a huge target there will be a pressure. Even if you are scoring runs the pressure will be there, especially in the fourth innings when you have to chase big targets. It is a good thing we have been scoring well under pressure. If you look at the current Indian batsmen, they have good averages and are scoring centuries. Even during the Australia tour, there have been a couple of centuries. If you notice we have been batting well. It is a very good sign for us.

CC: Despite having a leg-stump guard, how do you adapt to swinging conditions?

SD: My basics are strong. As an opener you need to know how to play swing, which is very basic for an opener. It becomes a nature, because you practice so much. Also, with experience you learn more. Now we have travelled to Australia, South Africa and New Zealand. With that experience your game improves and knowledge expands. I personally feel if my basic is correct and my technique fine, it becomes easy to tackle everything.

CC: How tough it is to score runs outside the subcontinent. What has tours to England, Australia, South Africa and New Zealand taught you so far?

SD: It is tough to bat everywhere. There are places in India where it is difficult to bat. It is not that playing at home necessarily makes things easy for you. It is a good thing to play under tough conditions, because once you go outside and play well you are happy as a player. I don’t believe we cannot go abroad and play well. We are a young Test side, and I feel we have gained a lot of experience from whatever country we have toured. The next time if we get a chance to tour the same places, we will be well prepared.

CC: Delhi has produced some of the most prolific batsmen of recent times — Aakash Chopra, Virender Sehwag, Gautam Gambhir, you, Virat Kohli, and now even Unmukt Chand. How did Delhi edge past Mumbai in becoming the batting capital of India?

SD: Whatever Ranji Trophy I have played, I think we play a lot on seaming wickets. The weather is cold and windy, so the ball swings more; we also have had good fast bowlers. As a result we prepare seaming wickets. I guess we have more openers from North because of that. I think one of the reasons for Delhi producing quality openers is green wickets. It becomes a little easier when you have played on such seaming conditions.

CC: It is said that you often break into singing while playing? How true is that?

SD: You have to switch off. I like to sing when I am playing or even when I am standing, because if I don’t switch off, I will get mentally tired very quickly. I want to keep my mind as fresh as possible to play a big innings. Each and every player has different ways to switch off. So yes, that is one of the reasons and yes I like singing, even though my voice is as such that I can only sing to myself (laughs). I am like that, and I enjoy it.

SD: My favourite sportsperson is Roger Federer. As for my favourite cricketer, I have too many: I like Yuvraj Singh’s batting, and then there is Sachin Tendulkar, and even Brian Lara. VIDEO: Joe Burns ready to bat at any position for Australia against Bangladesh 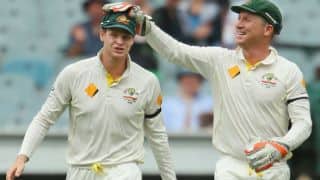 Steven Smith should bat at No. 3, lead from the front like Ricky Ponting: Brad Haddin