Shivnarine Chanderpaul’s career will go past the 20-year mark on June 8, 2014.

Shivnarine Chanderpaul, born August 16, 1974, had a career of all sorts of oddities and curiosities. Abhishek Mukherjee lists a few not-so-popular aspects about the unsung hero of West Indian cricket.

Shivnarine Chanderpaul had made his Test debut against England at Bourda on March 17, 1994. Now one of the veterans of the sport, the West Indies legend is already in his third decade of his international career, and will officially reach there when the Test at Sabina Park gets underway on June 8, 2014.

Here, then, is a list of 10 things you probably did not know about the most underrated of those who had made it to the 10,000 Test runs mark (this does not include well-known facts like his playing a First-Class match alongside his son, his marking his guard with a bail, or his being a member of a losing side on most Tests):

1. Rohan Kanhai had nicknamed him ‘Tiger’. The name has stuck ever since.

2. The little black things under his eyes are anti-glare stickers with ‘Mueller’ written on them.

3. He used to bat with a straight, crouched stance in his early days.

4. He still holds the record of facing the most balls without being dismissed — 1,051 against India in 2002.

5. He holds the record of batting for the longest period of time without being dismissed as well — 1,513 minutes in the phase mentioned above.

6. Of all bowlers who have never taken two wickets in a Test innings, Chanderpaul has most Test wickets — 9.

8. He has a tendency to get berserk on April 10. In 2003 he scored a 69-ball hundred against Australia — then the third-fastest in the history of the sport. Exactly five years down the line, with 10 to score off 2 balls, he smashed Chaminda Vaas for a four and a six to seal an ODI.

9. He became the first West Indian captain to score a hundred on Test captaincy debut, and eventually finished on 203 not out — the second-highest score by any debutant captain (after Graham Dowling’s 239).

10. He made his IPL debut for Royal Challengers Bangalore (RCB) against Mumbai Indians (MI) in 2008. He opened with Rahul Dravid, while Jacques Kallis batted at No. 4. RCB won the match. 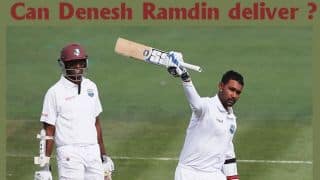 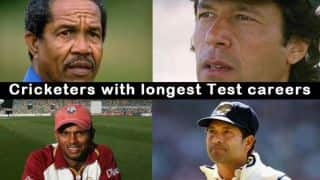 Shivnarine Chanderpaul and others with 20-year long careers