Sid O Linn played cricket for Western Province, Transvaal, and Kent, football for South Africa and Charlton Athletic, and once did a hole-in-one.

Sid O Linn, born May 5, 1927, played cricket for Western Province, Transvaal, and Kent and football for South Africa and Charlton Athletic. Along with other things, O Linn also opened batting for South Africa in 7 Tests, 5 of them on South Africa s England tour of 1960, and once did a hole-in-one at Brisbane. Abhishek Mukherjee looks back at a man of many talents.

Trent Bridge, 1960. After England had reached 287, South Africa had crumbled against Fred Trueman and Brian Statham for a mere 88. Colin Cowdrey asked the tourists to bat again, and Trueman was all over them in no time. Goddard was cleaned up for a duck. Pom Pom Fellows-Smith, top-scorer of the first innings, went next. And Roy McLean edged one off the next ball.

Holding fort at one end was the once-magnificent Jackie McGlew. The score read 23 for 3. As the ignominy of innings defeat loomed on the horizon, out strode the tall, imposing frame of Sidney O Linn. The previous summer in South Africa had fetched O Linn 619 runs at 68.77. He was named one of the five South African Cricket Cricketers of the Year.

O Linn had had a decent start to the tour, with 33* and 73 in his first two outings. Nothing had seemed to work after that. There was the odd fifty here and there, but that was about it. He had filled in as reserve wicketkeeper when John Waite and Chris Duckworth were injured, but little beyond.

It was a different story here. Waite had dislocated the little finger. There was no Duckworth, so O Linn had to fill in. He took an excellent catch to dismiss Ken Barrington, and later caught Peter Walker.

It was a different test now. South Africa still needed 176 to make England bat again. They had 7 wickets left, of which Waite was nursing his finger. Worse, it was only the second evening. O Linn had perished to Trueman in the first innings, trying to fend one and getting brilliantly caught by Walker at short square-leg, but not before hanging around for 38 minutes for a solitary run.

They batted for two hours the third morning, McGlew and O Linn, before the O Linn called for a single. McGlew responded, but collided with bowler Alan Moss, and Statham s direct throw found him short. Cowdrey tried to recall McGlew thrice, but the South African refused to return.

There was a partnership of sorts before Statham struck again, this time getting Peter Carlstein, caught at second slip, and Tich Wesley, Jim Parks taking the catch left-handed inches from the ground, off consecutive deliveries. Wesley bagged a king pair. South Africa still needed 77 when the injured Waite walked out.

Waite went for runs straightway, for survival would not have helped. O Linn took a backseat temporarily, carrying on unperturbed nevertheless. Waite s 60 took time, but that had to do with some excellent accurate bowling, especially from Moss. The pair added 109 in 150 minutes.

But he continued. O’Linn continued to battle away in his own peculiar style. Perseverance and concentration were his main assets, but he hooked, cut and drove past cover with flashing strokes, wrote Wisden. He was a mere two short of hundred when he edged one off Moss. For a split second it seemed the ball would soar to the third-man to give the man his maiden Test hundred, but Cowdrey leapt up, taking off a spectacular catch with his right hand.

O Linn had batted 326 minutes for his 98, but all he could do was postpone the Test to the fourth day. He won plaudits from Wisden nevertheless: This was a noble fight in the best traditions of cricket and emphasised once more that a game is never lost until it is won.

Patience would remain the salient feature of O Linn s batting on that tour. He batted for two hours for 42 on Test debut. In the first innings at Trent Bridge, 38 minutes of batting had yielded him 1, as mentioned above. His 27 at Old Trafford would take 174 balls. And at The Oval he would score 55 in 193 minutes.

His finest show on that tour came against Warwickshire. In the first innings he walked out at 31 for 4 and top-scored with 61 to take the tourists to 185. After Tayfield gave them a 36-run lead, O Linn went after the bowling, remaining unbeaten on 120 before McGlew declared on 244 for 5.

Sid O Linn played 7 Tests in all, 5 of them on that 1960 tour of England. Two others came in 1961-62, against New Zealand at home. He scored 297 Test runs at 27. His First-Class numbers, 4,525 runs at 35.62 with 4 hundreds, were impressive, given that high batting average was not a salient feature in South African domestic cricket of that era.

The dominant feature of his career, as exemplified by his stints for multiple sides, was his dogged attitude. He was not the talented of them, but as Peter Pollock wrote, a man renowned for his fighting spirit and doggedness.

The footballer who came to cricket

Registered Sidney O Linsky at birth, Sidney s surname changed to O Linn at some point. He rose through the ranks of South African domestic cricket quickly, making his First-Class debut soon after the Second World War. Then he switched to football.

O Linn was good enough to make it to the South African football squad on the Australian tour of 1947, making a solitary appearance. That was not the only other sport he played. On that tour he did a hole-in-one at the 158-yard 14th, that too using borrowed clubs. Not only that, he was so new to golf that The Telegraph (Brisbane) called him a novice golfer . O Linn became the 26th player to achieve the feat in Victoria Park, Brisbane.

The English clubs often toured South Africa in the early days of the post-War era to play competitive football, and perhaps more importantly, to recruit professionals in an amateur-heavy league.

He also made it to the Kent County cricket side, and played cricket in summer and football in winter. The Charlton side of the mid-1950s featured at least three Kent professional cricketers, Leary, O Linn, and Derek Ufton. Between 1947 and 1957 O Linn played 194 matches for Charlton, scoring 33 goals.

That season witnessed perhaps his greatest innings, the unbeaten 111 against Surrey against the Bedser twins, Jim Laker, Tony Lock, and Stuart Surridge. Alec Bedser and Surridge, excellent with the new ball, bowled out Kent for 192. Then Peter May scored a typical 124 to give Surrey a 133-run lead. O Linn joined Godfrey Evans at 48 for 2.

The pair added 95 before Evans s blitzkrieg ended, but O Linn carried on, unfazed. He lost his partners one by one as Alec Bedser kept probing away and Laker and Lock picked up crucial wickets, but they could not get O Linn out of the way. Even after the ninth wicket fell on 291 O Linn carried on, protecting Colin Page from probably the most potent bowling attack in world cricket of the era.

O Linn forced Alec Bedser to come round the wicket. Tom Clark, playing for Surrey in the match, later recalled that it was the only time he had seen the champion do the same for any batsman. O Linn remained unbeaten on 111 when Bill Murray-Wood surprised everyone by declaring, setting Surrey 188 in 92 minutes. Surrey pulled off the chase with minutes to spare, but not before they lost 8 wickets.

O Linn returned home after a four-year stint career Kent and a decade-long stint with Charlton. He settled in Transvaal, for whom he played till 1965-66. 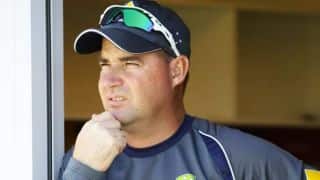