Sikandar hails from Sialkot in the northeast of Pakistan. Originally, he wanted to be a fighter pilot and he wrote the exam, which got him into Air Force college.

Zimbabwe batsman Sikandar Raza (left) is a Pakistan-born cricketer who immigrated to Zimbabwe with his family as a teenager in 2001. He was granted citizenship in 2011 following which he became eligible to play for Zimbabwe. He produced some brilliant performances in the domestic level. Sikandar made his One-Day International (ODI) debut in May 2013 followed by his Test one in September 2013. He has played 27 One-Day Internationals (ODIs) and four Tests for the African nation. He is a right-handed batsman and bowls a bit of off-spin.

Sikandar hails from Sialkot in the northeast of Pakistan. Originally, he wanted to be a fighter pilot and he wrote the exam, which got him into Air Force college. His pilot dream was over when in third year, he failed an eye test. He then started university where he picked up cricket and thus started his cricketing career.

On the right, Sikandar’s look-alike Aftab Shivdasani, is a Bollywood actor who started his acting career as a child actor in the movie Mr India (1987). He was awarded the Zee Cine Award for Best Debut Male in 2000 for his role in the movie Mast, which released in 1999; for the same movie, he received the Star Screen Award for Most Promising Newcomer Male. He is married to Nin Dusanj, who is a London based Punjabi working in Hong Kong; they got married on June 11, 2014.He is famous for his roles in various comic genre movies; his last Bollywood release was Grand Masti. 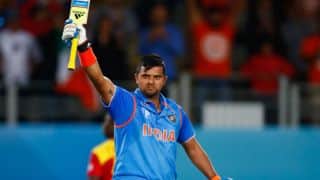