Sikandar Raza is a key batting figure in the Zimbabwe line-up.

Sikandar Raza was born in Pakistan and aspired to be a fighter pilot. However, he lost out on his dream as a young man and he then found success in cricket. Miles away from Pakistan, Zimbabwe became his home and he has been a part of their side since 2013. Nishad Pai Vaidya spoke to Sikandar about his journey as Zimbabwe prepared for their ICC Cricket World Cup 2015 clash against India in Auckland.

As a young boy, Sikandar Raza Butt dreamt of piloting fighter jets. Touching the skies and skimming them at a great speed was his dream growing up in Pakistan. However, life does not often work out the way you want it to. Sikandar could not achieve that dream! Any young man would have been crest-fallen at losing out on a life ambition. But, when life shuts one door on you, it opens up other avenues for you. Little did he know that he was to find success miles away from his land taking up a sport that was nothing more than a pastime for him. READ: Dav Whatmore: Zimbabwe need to play more ODIs in order to improve

Cricket wasn t my first choice to be honest. Cricket was a weekend sport; I used to watch my dad and my uncle play. I wanted to be a fighter pilot but that did not work out. Then, I went to Scotland, because I wanted to be a software engineer, Sikandar said. His family moved to Zimbabwe in 2002-03, and Sikandar flew to Scotland to pursue a degree in software engineering. Along the way, he also played cricket and had a very good season as he finished his degree. I got my degree; luckily, when I finished I had a great season in the UK. I spoke to my family and they were quite supportive. Suddenly in 2009, I started playing cricket, he said. READ: ICC Cricket World Cup 2015: Zimbabwe aim winning farewell to Brendan Taylor

Having made his First-Class debut for Easterns in 2007, Sikandar was back in Zimbabwe for good in 2009-10 and commenced his climb to international cricket. By 2012, he was a part of the Zimbabwe A side and in 2013, he made his One-Day International (ODI) against Bangladesh. It was a chance he took after his degree. Sikander said with a philosophical tone, It was not difficult but about the challenge that lies ahead. Had this not worked out, I would have had no regrets as I was trying my best and one can only hope for the best. Sometimes, your best is not good enough or it does not achieve what you want to. READ: Brendan Taylor could play his last match for Zimbabwe against India in ICC Cricket World Cup 2015 following Nottinghamshire deal

Sikandar is optimistic and believes that you can give your best and then hope for it work out. I wanted to be a fighter pilot, but that did not work out. I then wanted to be a software engineer and I got my degree. It was about putting into it and giving everything. What really helps is the support from the family. You can only ask for the best and nothing else, he said. READ: ICC Cricket World Cup 2015: India take a break as Zimbabwe train at Eden Park

Growing up, he would have never imagined him playing international cricket, let along playing for Zimbabwe. Handling that disappointment as a young man has given him the strength to take on life. With that optimism and mental strength, he has charted his path towards success. ICC Cricket World Cup 2015: POINTS TABLE

Although he made his One-Day International (ODI) debut in May 2013, it is his Test cap he most cherishes. Sikandar made his Test debut in September 2013 against Pakistan. When asked about his proudest moment in international cricket, he said, It has to be the Test cap. I wasn t supposed to play, but Brendan Taylor pulled out last minute as he had a baby boy. I was walking out to the nets when I was told that I was going to make my debut. For me it was definitely my proudest moment. ICC Cricket World Cup 2015: SCHEDULE & MATCH DETAILS

Playing against the best always presents an opportunity for any individual to do better. For me, it has been quite an average tour and I would want to finish it off on a high. People have showed a lot of faith in me and that hasn t worked out for me. That will stay with me a little longer than how I would have wanted it. It is time when I get back home, when I get over it. But, it is another game, the beauty of it is against the world champions. It means you will be tested in every department. If you come out on top, you know you ve done yourself a bit of justice, he said. Top 10 batsmen in ICC Cricket World Cup 2015

Raza bowled in the nets in Zimbabwe s final practice session. He then padded up and had an intense round under the supervision of the coach Dav Whatmore. As the interview came to an end, Whatmore called out to him for a meeting. There are a lot of methods that are tried. For you to do well in international cricket, you need to work out a method that will help you perform consistently. Having played about 20-odd ODIs, I am going towards the right direction. It will take time and it has. I am sure all the failures will add up to the success I am trying to achieve for myself and the team, Raza said as he turned to join Whatmore and get more tips to improve. Top 10 bowlers in the ICC Cricket World Cup 2015 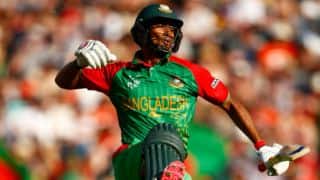 Michael Clarke: I am certainly fit, are you?