Simon Taufel bid adieu at an age when most of the erstwhile umpires used to break into the international arena. Yet, he has carved a niche for himself with sterling decision making for nearly one and a half decades. Arunabha Sengupta salutes the man who exited as an international umpire after officiating the 2012 World T20 final on Sunday. 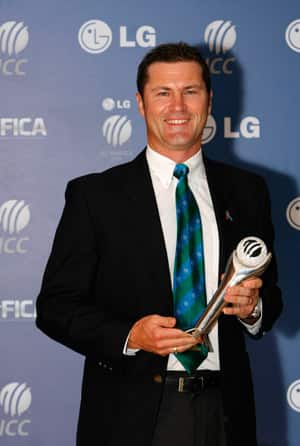 Youngest among the elite panel, the most active, universally respected and uncannily accurate in his decisions, Simon Taufel won the ICC Umpire of the Year award five years at a stretch, from 2004 to 2008 Getty Images

Simon Taufel bid adieu at an age when most of the erstwhile umpires used to break into the international arena. Yet, he has carved a niche for himself with sterling decision making for nearly one and a half decades. Arunabha Sengupta salutes the man who exited as an international umpire after officiating the 2012 World T20 final on Sunday.

There was a time when cricket umpires were the proverbial elders on the field which is saying a lot given the near-geriatric ages to which a lot of the cricketers themselves kept playing the game.

We looked at the figure hunched behind the stumps, in long white coat and black trousers and saw the face of age and wisdom, with steaks of experienced grey creeping out from beneath the hat. In fact, there were uncharitable whispers sometimes floating through the otherwise stiff upper-lipped long rooms “Until one has reached an age advanced enough for eyesight to fail at 22 yards, one cannot qualify for the important position.”

Even towards the end of the last century, middle age was the norm. One looked at Dickie Bird with amusement mingled respect, at David Shepherd for reliability and his famous shuffle, Steve Bucknor for his excruciatingly long decision making process.

And then it all changed. In came Simon Taufel, officiating at the preposterous age of 27 in One- Day Internationals and 29 in Tests. Aleem Dar followed, dapper and youthful at 35. And there had also appeared the effervescent and eccentric energy of the eternal child in Billy Bowden.

It was not only the age. These umpires ceased to be the venerable men of wrinkled wisdom, sagacious seriousness and added layers of mortal flesh. Taufel was often one of the fittest on the field, Dar continued to play cricket while a full-fledged umpire, and Bowden added the curious extra dimension of infectious madness to the proceedings.

The decision making of all three reached a percentage of correctness seldom witnessed in cricket or any other sport. And even in this elite company, Taufel stood apart. Youngest among the elite panel, the most active, universally respected and uncannily accurate in his decisions, he won the ICC Umpire of the Year award five years at a stretch, from 2004 to 2008.

A fast bowler in his early days who took the new ball for the New South Wales schoolboys and played alongside Michael Slater and Adam Gilchrist, a bad back put paid to his ambitions as a cricketer. Moving on to umpiring, Taufel worked with vim and vigour on his fitness, and remained agile and alert throughout his distinguished career. And finally, after two aborted attempts, he managed to stand in a World Cup final in 2011 when Australia, for the first time since he started his career, did not manage to make it to the title round.

Never demonstrative, never into the game, Taufel managed the impossible of getting noticed and becoming a performer cheered on the field because of his excellence. And with 74 Tests and 174 One Day Internationals under his belt, he has left quite a mark on the record books in spite of his relatively tender age.

His final decision to call it a day at 41, an age when most umpires used to break into the process and get to know the ropes will surely leave the game poorer. It may have been instigated by the terrorist attacks on the Sri Lankan tour bus in 2009 that left him and his family insecure. Taufel admitted that it had been a difficult telephone call to his wife the day the attack took place. Part of his decision may also have been influenced by the increasingly crazy international cricket calendar that has kept him away for far too long from his family. Both the cited reasons are undeniable indications of the times and the demands made on the professional cricketers and officials.

His calm frame at the wicket or at square leg will be sorely missed, as he had indeed become one of the respected and familiar figures of the game.

He joins the ranks of a select few umpires who will be remembered for all the right reasons.