John Montague Brocklebank was born on September 3, 1915 at Meols, Hoylake, Cheshire, the second son of the Sir Aubrey, as mentioned above, and his wife, the Honourable Grace Mary Jackson

In the year 1845, one Thomas Fisher had assumed the surname of Brocklebank (his mother s maiden name) by a Royal License. It was on July 22, 1885 that Thomas Brocklebank, Deputy Lieutenant, High Sheriff and Justice of the Peace for Cumberland, was elevated to the Peerage as the 1st Baron Brocklebank of Greenlands and Irton Hall, in the County of Cumberland and Springwood, Lancaster. The motto on the heraldic crest read: God send Grace.

The grandson of the 1st Baronet, Sir Aubrey Brocklebank, the 3rd Baronet, was a Director of the Cunard Steamship Company, the Suez Canal Company, and the Great Western Railway. Sir Aubrey s son, Sir Thomas Aubrey, the 4th Baronet, died unmarried and was succeeded in September 1953 by his younger brother, Sir John Montague, the 5th Baron, and the protagonist of this story.

John Montague Brocklebank was born on September 3, 1915 at Meols, Hoylake, Cheshire, the second son of the Sir Aubrey, as mentioned above, and his wife, the Honourable Grace Mary Jackson (sister of England captain, the Hon. Stanley Jackson, later Governor of Bengal). John was educated at Eton College and Magdalene College, Cambridge University. Perhaps the word educated is being used somewhat loosely here, because, like the scions of many other blue-blooded families before (and after) his time, Brocklebank channeled more of his energies towards the development of an athletic career rather than in acquiring academic knowledge. Cricket appeared to be his preferred sport, and we find numerous references to his exploits on the cricket field, both for Eton and Cambridge.

The archives show him to be a right-hand bat and a right arm medium-paced or leg-break bowler, depending on circumstances. His quick leg-spinners and crafty top-spinners were to earn him many wickets, particularly on dusty surfaces. John Brocklebank played 21 First-Class matches in a span of 1936 to 1949 scoring 112 runs. He averaged 9.33 with the bat, and held 7 catches. He also took 68 wickets. His best innings bowling effort was 6 for 92, and he averaged 29.38 with the ball. He had 4 hauls of 5 wickets in an innings and 2 hauls of 10 wickets in a match.

In the summer of 1933, we see Brocklebank turning out for 4 school matches. His first game for Eton was a home game against Winchester, another great and ancient bastion of school cricket in England. The visitors put up a total of 336. Brocklebank took 3 for 66. The Eton reply was an impressive 433 for 8 declared. The game was drawn with Winchester finishing on 130 for 3. Brocklebank did not bat in the game.

The game against traditional rivals Harrow was, as always, played at Lord s. It was another drawn game in which the highest individual scorer was John Pawle of Harrow with 96 in a first-innings total of 237. For Eton, Nigel Turner and Alan Holmes took 4 wickets each. Eton skipper, Neil Hotchkin (88) then top-scored in a first-innings total of 195. For Harrow, Anthony Duveen took 5 for 42. Brocklebank took 3 for 50 in the Harrow second innings of 146 for 6.

For Lord s Schools versus The Rest at Lord s in August Brocklebank took 4 wickets in each innings. For Public Schools against the Army at Lord s he took 3 for 14 and 4 for 42; the Public Schools won by 45 runs.

In 1935, John Brocklebank was on the first Arab tour to Jersey, flying out, as reported in The Cricketer in a ridiculously-flimsy machine which left Heston Airport on the morning of September 8, 1935, and returned by air later that month. Brocklebank s potential as a bowler was taken note of by the then Cambridge captain Hugh Bartlett. This was a pioneering effort in its own way, being the first instance of a touring cricket team traveling by air to its destination.

The summer of 1936 saw him at Cambridge, making his First-Class debut for the University against the visiting Indians at Fenner s. Batting first, the Indians, under Vizzy (who had a first-innings duck), were dismissed for 161. Jahangir Khan (4 for 22), John Cameron (4 for 59) and Brocklebank (2 for 54) took the wickets. The undergrads replied with 217. The match ended in a draw.

In all, Brocklebank played 7 matches for Cambridge, the most that he ever played for any team. He took 33 wickets with best figures of 6 for 92. He took 5-wicket hauls 4 times and 10 wickets in a game twice.

At Worthing against Sussex in 1936 Brocklebank had his first 10-wicket tally for a match, capturing 5 for 57 and 5 for 73 in a drawn game. In another drawn game, against Somerset at Taunton this time, in end-Jun, Brocklebank took 6 for 140 in a Somerset first-innings total of 323.

Against the old rivals Oxford at Lord s in July 1936 Brocklebank picked up his second match haul of 10 wickets, capturing 4 for 47 and 6 for 92, his best First-Class bowling figures. Cambridge won the match by 8 wickets, largely because of Brocklebank s bowling efforts.

Brocklebank was a member of a 13-man MCC team that toured Canada in August 1937, playing in 18 games, all deemed to be Second-Class fixtures, with varying degrees of success. This tour by the MCC was in reciprocation of a tour by a Canadian team to the British Isles in 1936.

Between 1939 and 1949, Brocklebank played 5 First-Class matches for the Free Foresters, taking 18 wickets. A small introductionto this cricket club may be in order here. The club was founded by the late Rev. William Bedford, who raised a team of amateur players to play against the Pilgrims of Dee on the grounds of his rectory at Sutton Coldfiled, Warwickshire, on July 20, 1856. The team adopted the title Free Foresters Foresters referring to the nearby forests of Arden in Warwickshire and Needwood in Staffordshire, and Free because members would be free to play against the club without permission, rather than being tied to FF alone hence the FF motto United Though Untied.

It is a wandering club in the sense that they have no ground of their own. Traditionally, their games against Oxford and Cambridge have been awarded First-Class status. They are the only wandering cricket club in modern times to play First-Class cricket. They played their last game against Oxford in 1968 under the leadership of Donald Carr, Mike Brearley contributing a second-innings score of 91 to win the game for the Free Foresters by a huge margin of 299 runs.

In 1939, Brocklebank was selected for his only game for the Gentlemen against the Players at Lord s. The Players fielded a star-studded team that had in its ranks the likes of Harold Gimblett, Len Hutton, skipper Eddie Paynter, Denis Compton, Joe Hardstaff Jr, Doug Wright, Bill Copson and Bill Bowes, among others. The Gentlemen were led by Wally Hammond (who had turned amateur in the hope of gaining the England captaincy), and boasted of Bob Wyatt, George Heane, Bryan Valentine, the aforesaid Hugh Bartlett, Freddie Brown (later to captain England on a historic Ashes tour of Australia), wicketkeeper Billy Griffith, and Ken Farnes, among others. True to tradition, the Players won the game by 160 runs. Brocklebank captured 3 wickets in the match.

Brocklebank had a short stint of 4 matches for Lancashire in 1939, taking 5 wickets for them. He was selected for a representative MCC team to tour India in 1939-40 under Jack Holmes of Sussex, but the tour had to be cancelled due to the outbreak of World War II. He did keep his tryst with India though, but more of that later.

With the World War looming ahead, Brocklebank joined the Royal Artillery as a Territorial, reaching the rank of Major. He was taken as a prisoner of war by the Germans on the island of Cos in the Dodecanese in the year 1943.

It was on the last day of 1947 that John Brocklebank finally made his connection with India, making his Ranji Trophy debut, for Bengal against Holkar at Eden Gardens. Holkar, led by the CK Nayudu, batted first. Their first-innings ended at 212. For the home team, Bengal debutant Brocklebank took 2 wickets, one of which was that of the opposing skipper.

Bengal finished on a miserable 95 in response. Hiralal took 5 for 54 and skipper Nayudu had 4 for 33. Holkar s second-innings total came up to 267, bolstered by an innings of 96 by MM Jagdale. For Bengal, Shute Banerjee was in prime bowling form, capturing 7 for 50. In response Pankaj Roy fought hard with 106 from No. 4, but the Bengal innings ended at 256. For Holkar, Ravi Vaid (5 for 37) and Gaekwad (3 for 88) ensured a victory by 128 runs. This was the only time he played for Bengal.

Brocklebank played his last First-Class game for the Free Foresters, against his old alma mater, Cambridge, at Fenner s, in 1949. He picked up 1 wicket.

He succeeded to the title of 5th Baronet at the age of 38, on the death of his unmarried elder brother. With his cricketing days behind him, he turned his attention to the family business of shipping, gradually rising in the hierarchy of Cunard Company to become the Chairman at the relatively early age of 43. He held this crucial and exacting post for 6 years, before the rigors of the position began to have a deleterious effect on his health, forcing him to resign his post. He relocated to the sun and warmth of the Mediterranean in the hope of regaining some of thelost health and happy vitality that had always been an integral part of his persona. His numerous friends always thought of him as being a gay and gallant companion. 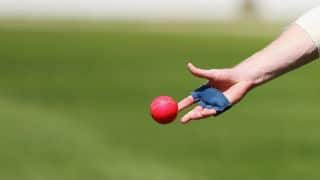 Ranji Trophy 2016-17, Day 2, Round 4, match results and highlights: Tripura in command after Swapnil Asnodkar, Snehal Kauthankar fight back for Goa