A day without laughter is a day wasted, Charlie Chaplin had once said famously. If you are a social media regular, you would be assured that not a single day in your life goes waste with Ramesh Srivats brilliant humour on Twitter and Facebook acting as a huge de-stress. 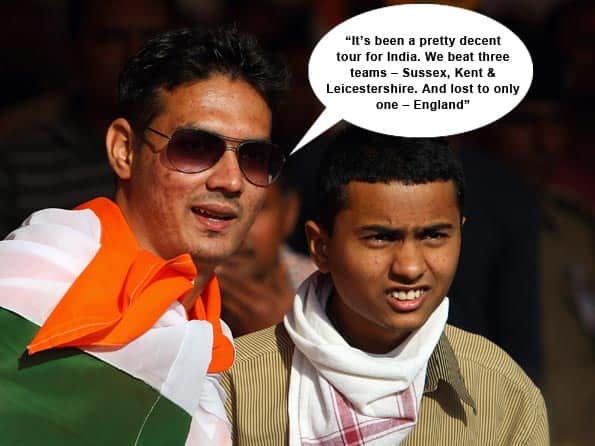 “It’s been a pretty decent tour for India. We beat three teams – Sussex, Kent & Leicestershire. And lost to only one England” Getty Images

“A day without laughter is a day wasted,” Charlie Chaplin had once said famously. If you are a social media regular, you would be assured that not a single day in your life goes waste with Ramesh Srivats s brilliant humour on Twitter and Facebook acting as a huge de-stress.

Here is a collection of Ramesh s tweets on cricket in the year that just went by:

# And Sachin becomes the first ever batsmen to score 14,533 runs in Test cricket.

# John Lennon once told us to imagine a world without boundaries. Dravid & Gambhir just gave us a brief glimpse of it.

# Sehwag shoulder. Gambhir arm. Praveen elbow. And now, Sachin hamstring. At this rate, soon we ll be a full human being short.

# In Colombo, if you ask for UDRS, a player will land up, saying “called me?”

# Good to see Ashish Nehra back. He adds teeth to the Indian attack – 32 of them.

# Most Pakistan games have nothing to do with the opponent. Its Good Pakistan vs Bad Pakistan.

# Sachin s father must be getting a bit irritated now. Every batsman looks up towards him after a century.

# Why do they show a bat and ball graphic next to Sammy? He s there only as management. Maybe they should show the PPT logo.

# Why is Munaf at covers? His ideal fielding position is flat on the ground right behind the helmets.

# The only dream left for Dhoni now, is to win the Ranji Trophy.

# Unlikely that Sachin will be around in World Cup 2015. Sigh. Likely that Sidhu will be. Weep.

# Oh, Symonds has been benched. Clever. Now whenever Bhajji wants him on the field, he can shout, “Oye Symonds. Bench chod. Idhar aa.”

# How dare Malinga choose to earn more money rather than serve his country? Who does he think he is??? Us?

# IPL has become so dead that it should be renamed RIPL.

# Mumbai Indians are the Advani of IPL.

# Sehwag out, Zaheer injured, Sachin down with fever, Dhoni facing ban. Situation is very Gambhir. We need to pray for some Rain, na?

# So which is the most bizarre dismissal you have been involved in?

# I think the Indian batsmen are quite vulnerable to the short ball. Also the round, red ball.

# Happy Independence Day. I join our cricketers in fondly remembering this day when we got England all out. From India, that is.

# India has a very Twitter-friendly bowling attack. No one crosses 140.

# Yesterday the Indian team bought a crate of beer. But they didn t drink any. Why?

Answer: No one could get the openers out.

# Task allocation: Sachin, you carry expectations. Dhoni, you carry the responsibility. Munaf, you carry water. Dravid, you carry your bat.

# “N>ass>er” has a straight “ass” in it, while “Hussain” has a reverse one. #justsaying

# We are on the verge of an important milestone. Between Sachin Tendulkar and Parthiv Patel, they have 99 international centuries.

# After our team comes back from this England tour, the BCCI should take all the players around in an open ambulance.

A: He s lost all his matches.

# At least the Indian team was not totally stripped. England may have taken our pants off. But we still have a tie.

# I m secretly hoping that ICC also releases an Injured XI of the year.

# Q: How many Indian cricketers were in the room during the ICC Awards ceremony?

A: None. As usual, they were all out.

# It s been a pretty decent tour for India. We beat three teams Sussex, Kent & Leicestershire. And lost to only one England.

# Standing ovation as Sachin walks in to bat at the MCG for the last time. Till the next series, that is.

On players in general

# Rahul Dravid is a great cricketer. But I really thought he ll take 30 odd years to complete 15 years in Test cricket.

# I think, even if India has 10 runs to win, in 2 days, with 9 wickets in hand, Rahul Dravid will walk in with a look of grim determination.

# It s VVS Laxman s birthday today. Much celebration all over India. 2-minute silence in Australia.

# Yay. Dhoni is now Doctor Dhoni. So what does he do with his patients? Make them well, of course.

# Ashwin will never ever get drunk. Why? Because he always stops at one.

(Ramesh Srivats is the MD & CEO of TenTenTen . His amazing sense of humour has earned him a huge following on Twitter, Facebook and his blog Let’s Put Da )