Make no mistake: Malcolm Knox is one of the greatest cricket writers there was, is, and will be, more so if you prefer facts over conjured semi-fiction.

Make no mistake: Malcolm Knox is one of the greatest cricket writers there was, is, and will be, more so if you prefer facts over conjured semi-fiction. He had busted many a myth in Never a Gentleman’s Game: The Scandal-Filled Early Years of Test Cricket, while The Captains and The Keepers are truly delightful reads. From Greg Chappell to Phillip Hughes, he has been closely linked with many an Australian champion. When he does not write cricket, Knox chronicles Australian history or pens down award-winning crime fiction. And I have not even mentioned the Norma Khouri incident, the greatest feather in that cap studded with plumes.

But even the greatest tumble at times. Shane Warne has bowled a high full-toss in a World Cup final. Sachin Tendulkar has gone into inexplicable shells. Ian Healy has made glitches. Arsalan has run out of biryani by ten at night. I can go on.

Knox, in his article in The Sydney Morning Herald (dated November 14) put forward a few interesting insights. The headline (While Australia destroy themselves, England destroy the game) caught my eye. It had to. Why would Knox (no less) write something of that sort, given that it has been barely months since England have played an intensely fought series against Pakistan, and more recently, one in Bangladesh?

England have, in fact, dared to visit Bangladesh despite imminent danger, but let us not get into that. It was a series brilliantly organised. England had made a bold decision. Bangladesh gave them the best security they could muster. And despite many a minor on-field incident, England and Bangladesh thanked each other after the series; and I am talking about the cricketers as well as the fans here.

But this is not about England s tour of Bangladesh. This is about one specific article, and a set of allegations by Knox.

Some of these are obviously valid. The unusual, counterintuitive strategies of Alastair Cook and Virat Kohli on Day Five at Rajkot had baffled fans and critics alike. I was no exception.

Cook had defended himself: The reason behind it is we didn t want to give India a sniff … Maybe a braver person would have set them 240 … I thought it was a fair declaration, especially for the first game of the series.

If that is not self-admission, I really do not know what is. Cook admitted, uninhibitedly, that he was not brave during the declaration. Perhaps Kohli s staggering record, especially during chases (recent and otherwise), had made him think.

Of course, not being brave is never a reason to be proud of. It defies the concept of attractive cricket, which is how cricket should be to survive as a spectator sport in the long run.

Indeed, it was baffling, but perhaps more baffling was Knox s accusation: With 10 wickets in hand, an overnight lead of 163 runs and no chance of losing, England might have pressed for victory. Instead, they meandered along at two runs an over, neither taking a risk nor playing a shot, seemingly content to move on to the second Test with a draw. He was talking about the partnership between Cook and Hameed on Day Two.
Did they, now? Two runs an over sounded abysmal…
England had finished Day Four at 114 for nought after 37 overs. On the second morning they added another 65, from 130 balls in other words, they scored at exactly three an over (is it not fun when division becomes this easy?).
Knox wanted to point out that England was batting slow, which is something probably we all acknowledge: why back that with a false figure?

Now, three an over may not be slogging at its best, but they did not go at two either. Not for the last time in the article did Knox renowned for his no-nonsense pursuit for truth and one of the icons of contemporary investigative journalism let us down.

***
Once [Haseeb] Hameed did open his shoulders and take a risk, he got out for 82. He looked disappointed with his decision when he should have been proud.
It beats me, exactly Hameed should be proud of getting out. The teenager was, almost certainly, asked to go after the bowling, something he has done beautifully, if infrequently, throughout his innings.

Unfortunately, Hameed hit one back to Amit Mishra just when he decided to chance his arms. The boy looked sad for two reasons. First, the teenager missed a hundred on Test debut. As per Knox it is something not to fret over. One may argue with that, but the team-over-individual logic definitely holds ground.

What I do not get is the other aspect of the statement: Why should Hameed be proud of getting out, given that the need of the hour was to stay and accelerate, given that he was already in and had done the hard work?

It may make sense to some, but I somehow do not get the logic. Maybe there is some glory in not pulling off the job you are expected to. Maybe getting out just when the team needed to up their tempo is something to be proud of. If it is, I certainly do not belong to the same school of thoughts.

***
They [India] proceeded to grind out a 731-minute first innings of 488. The wicket was so good for batting that, even without trying, India scored at three runs an over.
There are two things I would want to mention here. First, rarely have teams batted at more than India s 3.01 after conceding a first-innings total in excess of 500. At SSC earlier this year, Sri Lanka had been bowled out for 355 (significantly lower than 500), and despite reaching 267 for 1, Australia had not really bothered to accelerate. They paced their innings at 3.02.

A chunk of Knox s article has been about Australia s aggressive approach to the sport. Maybe SSC was a rank turner. What then, about Christchurch, where New Zealand scored 370 in the first innings at 5.63 and Australia responded with 505 at 3.29?

If one goes further back one can always cite Roseau, where West Indies had been bowled out for 148, following which Australia had got 318 at 2.97 an over. Do note that in none of these innings have Australia been up against a score in excess of 500.

I know what is coming: the wicket was so good bit.
Let us, for once, assume that India were batting on a good wicket. India did not accelerate after being 361 for 6 (up against 537, if I may remind). Let us call that approach negative, given that the wicket was good.

Now, consider this. You are playing the third innings of a Test on a pitch so good that batting at 3 runs an over despite being under pressure qualifies as not trying . Had the wicket been that good, did Cook do anything wrong by holding the declaration back? Questions, questions…

***
Negative cricket has long been the sickness of the five-day game in India. It is now a worldwide problem because India has become the world s centre … Until captains want to play the game to win in India, shortening the span of a Test match will make no difference, and make it easier to attain the draws they all too desperately seek.
This is baffling indeed. Since their defeat against England in 2012-13, India have won 12 Tests at home, drawn 2, and lost none. Barring the recently concluded England match, the other draw was a rain-washed affair at Bangalore last year, where no play was possible for four days. In other words, India have won 12 consecutive home Tests that have seen over 90 overs of cricket. If that is not playing for a result, I do not have an idea what is.

To put things into perspective, Australia have played 17 home Tests over this span of time, winning 11, losing 2 (the most recent 2), and drawing 4. In other words, they had a run of 11 wins and 4 draws in 15 Tests.

This included a rain-hit SCG Test against West Indies that Australia should have won; a jaw-dropping run-fest at Perth (Australia 559 and 385 for 7 declared, New Zealand 624 and 104 for 2); and two Tests against India.

The draw at Melbourne deserves special mention, for the scores read remarkably similar to the recently concluded Test at Rajkot. Australia got 530; India responded with 465; and with plenty of time left in the Test, Australia reached 261 for 7 at stumps. They led by 326.

At that stage they might have declared, but Steven Smith marched on, declaring after batting for 23 overs on Day Five. To be specific, he declared an over after Shaun Marsh was run out for 99 (what was that statement about Hameed and his personal milestone again?). India were set 384 in 70 overs. This, after Australia were 1-0 up in the third of a 4-Test series.

But that was not all. MS Dhoni, and not Smith, had showed more intent, holding Cheteshwar Pujara back till No. 6 despite the first wicket falling at 2. He was going for a win, though India gave up from 19 for 3. They reached 142 for 6, gritted it out till 184 for 6 with 4 overs left, and then, instead of going for the win, Smith decided to shake hands with Dhoni and bring things to an abrupt end, confusing all and sundry.

Mind you, there might have been another draw, had India decided to shut shop and not go for the chase when they were set 364. They chased at 3.61 an over at Adelaide…

India have been accused of preparing rank turners (in other words, taking home advantage, something most teams have done since sports were invented). Glenn Maxwell had slammed last year s Nagpur pitch as diabolical , while Matthew Hayden tweeted Baffles me why our great game needs to tamper with conditions in favour for results.

Let us not go into the accusations by Maxwell and Hayden. It should suffice here to mention that they were not the only ones. Kohli mentioned that he was surprised to see grass on the Rajkot pitch. He is not alone in this: captains want to win, and at home they prefer conditions that favour their team (which is why overseas records are given that extra weight in the first place).
Unfortunately, this sort of contradicts Knox s points. If a pitch is prepared with a result in mind, with a win in mind, the allegation until captains want to play the game to win in India does not sound like a valid clause.

India have almost always pushed for results of late under Kohli, especially in India . They have won every time at home in such pursuits. They may be accused of preparing turning tracks, but not of negative cricket.

No, this has been a disappointment of an article by someone of Knox s stature. But then, even Aleem Dar has given a couple of dodgy decisions in the ongoing series…
(Abhishek Mukherjee is the Chief Editor at CricketCountry. He blogs at ovshake.blogspot.com and can be followed on Twitter @ovshake42.)
First Published on
Last updated on November 16, 2016 10:16 AM IST
TOPICS:
Australia South Africa England India vs England Australia vs South Africa 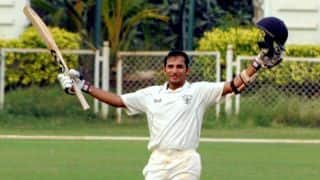