Within six months this cricketer has emerged as one of the crucial members of a revolutionary Bangladesh team.

He has been an integral part of Bangladesh cricket’s renaissance since the ICC Cricket World Cup 2015. This 22-year-old boy from the border district of Satkhira has already made his name as a quality batsman following his recent match-winning performances against Pakistan, India and South Africa. Soumya Sarkar, the brightest shining star of Bangladesh cricket, wanted to become a teacher in his early life but ended up being one of the emerging talents of world cricket. Following an interview with Sarkar, Sandipan Banerjee narrates the story of his life.

Barely seven months back, when Soumya Sarkar was first named in Bangladesh‘s World Cup squad, I had to seek the help of internet to find out more information on him. Till then he had his maiden One-Day International (ODI) in his kitty, that too against Zimbabwe, where he did nothing extraordinary. Even for someone like me, who happens to be an avid follower of Bangladesh cricket, it was a surprise selection. But as they say, life never ceases to amaze you. Within six months this left-hander has emerged as one of the crucial members of a revolutionary Bangladesh team that has been smashing one record after another, creating history in the process. READ: Bangladesh’s decision to axe Soumya Sarkar from Tests vs South Africa a huge blunder

Thanks to the class and flavour of his batsmanship, the ever-smiling Sarkar has won many a heart already, including mine. After talking to him and knowing him outside the cricket field, you could not help growing fond of Soumya. Besides being an excellent cricketer, he comes across as a great human being too. The soft-spoken young man continued with this pre-scheduled interview with despite having fever, just to keep his promise. VIDEO: VVS Laxman praises Bangladesh cricket

CricketCountry (CC): From an aspiring teacher to one of the young and upcoming talents of world cricket. Your life has completely changed within a year. Take us through this journey.

Soumya Sarkar (SS): My father is a former Bengali teacher in a government school. Had I not been a cricketer, I would have opted for a teaching job. It is just a childhood aspiration you can say. But I am very happy and satisfied to have become a cricketer. It is a matter of pride that I am representing my country. The last year has been like a dream for me. A lot of things have changed, but now my entire focus is on my future. I want to keep improving both as a cricketer and as a person.

CC: You have come through the ranks of age-group cricket.

SS: Yes. I played school and age-group cricket. Thankfully I had a good record over there. I scored 250 in a One-Day school game. I also had a double-hundred in Under-19 Asia Cup in Qatar.

CC: Who are the cricketers whom you idolise since your early playing days?

SS: During my early playing days I used to be a right-handed batsman, but after watching Sourav Da (Ganguly) and Brian Lara, I started batting left-handed. After a few years, when I was into competitive cricket, I became a fan of Yuvraj Singh. He used to play his shots in such an ease! I am also a huge admirer of Shakib bhai’s (Shakib al Hasan) batting as well.

CC: You made your debut just six months before the ICC Cricket World Cup 2015 and got selected for the Australia-New Zealand-bound squad. Were you surprised?

SS: My debut came against Zimbabwe at Mirpur in the last ODI of the five-match series. I batted at No. 3 and scored 20. After that I was not sure about my World Cup selection. But when I found my name was there, I was surprised a bit. It was huge moment for me.

I was surprised to be selected in the World Cup squad

CC: Your coach, Chandika Hathurusinghe backed your ability immensely and gave a newcomer like you the opportunity to bat at No. 3 in Australia. How tough this job was for you?

SS:  I am really thankful to him for trusting my abilities. I think he saw me for the first time when I was playing a practice game in Dhaka. I don’t know why, but he was very impressed and I got an opportunity in the team during the Zimbabwe series. Later in Australia he encouraged me to play at No. 3. He knew throughout my domestic and age-group careers; I have opened. So I already had the experience of playing the new ball. My previous experience with the junior team of playing on those Australian conditions helped me as well. The wickets in World Cup were so true; the ball came on to the bat quite nicely. My seniors in the team also supported me.

CC: Bangladesh had a memorable 2015 Cricket World Cup campaign where you experienced both highs and lows. How emotionally tough it was for you and the team?

SS: As you have rightly said, it was memorable for all of us. As a team we played some fantastic cricket. After the victory against England and the qualification for the quarter-finals we were over the moon. You would probably have seen our celebrations on television.

But after playing a cricket of such class, the loss against India was really disappointing. As a team we felt we could have performed much better. Though victories and defeats are part of the game, that loss to India in the quarter-final was really hurtful.

As a team we felt, we could have performed much better against India

CC: After the World Cup we have seen a change in your role. You are now batting at the top of the order. How is life as an opener?

SS: As I said earlier, opening is nothing new for me. At the top of the order I can play my natural game, which is scoring runs quickly. Also as an opener, I get lot more time to play a big innings. I am enjoying my new role.

CC:  You bat with someone as mercurial as Tami Iqbal. What role has he played in your improvement?

SS: Tamim takes the pressure off me and I can play my game. It is good to have a senior player guiding me.

CC: You are the inventor of the ‘Periscope short’. Do describe the how it came into being.

SS: [Laughs] There is nothing special about it. I just wanted to be aggressive against bouncers, so I started playing this shot. I try to remain inside the line of the ball while playing it. I also try to pick the right ball for this shot. But it is good to have a specific name for one of my shorts.

[Describing this shot, ESPNCricinfo wrote: “The shot seems to be born out of his dismissal against England in the World Cup. Off a Chris Jordan bouncer, Soumya ducked poorly and gloved the ball to the wicketkeeper.”]

CC: Are you more comfortable against spin or pace?

CC: In limited-overs cricket you often take risks too early, even against the oppositions’ best bowlers. Is this an instruction of team management or your own game plan?

SS:  No, this is my own game plan. The only instruction from team management is to play the natural game. I always wanted to attack the opposition’s best bowler. It is my game plan to take them on.

I always wanted to attack the opposition’s best bowler

CC: Even though you are an integral part of T20I and ODI set-ups, according to your coach, you “don’t fit in the schemes yet” for the Test format. Do you agree?

SS: Well, if coach has said this, I have to work hard on my game and prove him wrong. During my debut series against Pakistan I played as a middle-order batsman. But I feel I am more comfortable at the top of the order, as an opener. Let us see when the opportunity comes.

I want to open in Tests

CC: Your credentials are of an all-rounder. But apart from opening the bowling against Pakistan in Dhaka Test, we haven’t seen much of your all-round abilities.

SS: Yes, I know I have to improve my bowling. With my pace, I feel I should bowl a tight line.

CC: So far in your short career, you have played a few memorable knocks. Which one do you rate highly?

SS: That has to be the 51 against New Zealand in the World Cup. New Zealand bowlers, especially [Trent] Boult  and  [Tim] Southee, were bowling really well. The wicket was assisting them as well. We were 27 for 2 at one point. From there Mahmudullah and me put up a good partnership. That innings pleased me a lot. I should have carried on and got a big score.

CC: Your next series will be against Australia. Any special preparations for the likes of Mitchell Johnson and Mitchell Starc?

SS: Not anything special, but there are same preparations. I followed all my processes against Dale Steyn.

CC: Are you following the Ashes 2015? What is your prediction?

SS:  Yes, I am following it quite keenly. I feel England should win it from here. I quite agree with what Michael Clarke said, they [Australia] are playing with 10 men.

CC: Coming back to your team, you have played under Mashrafe Mortaza, Shakib Al Hasan and Mushfiqur Rahim. What are the differences you have found in their captaincy?

SS: Every human is different form each other. The trio have their own skills, approaches, and points of view.

CC: Do you think as a leader, what Mortaza has done for Bangladesh cricket is quite similar to Sourav’s contribution in Indian cricket?

SS: I am no one to compare between these two. As a leader, both have proved themselves. Sourav-da had Sachin [Tendulkar], [Rahul] Dravid, [VVS] Laxman and other great cricketers. Mashrafe has his own team — a mixture of youth and experience. It is not an easy task to manage this team and produce positive results.

CC: Do you firmly believe that in white-ball cricket Bangladesh is a now a force to reckon with?

SS: It is not about me believing: it is about what the others think. After our recent performance, I don’t think there is any doubt about this.

CC: What about performing away from home?

SS:  Remember, it had all started in Australia-New Zealand, two of the most difficult territories of world cricket. I hope that says a thing or two. POLL: Who should replace James Anderson in 4th Ashes 2015 Test at Trent Bridge? 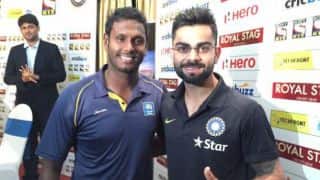