Bangladeshis have consistently produced some talented cricketers and one who stands out is the 22-year-old left-handed Soumya Sarkar.

Bangladeshis have consistently produced some talented cricketers and one who stands out is the 22-year-old left-handed Soumya Sarkar. He has already marked his presence by playing a few emphatic knocks in the recent times and has played a key role in Bangladesh’s recent triumphs in One-Day cricket. Suraj Choudhari writes about the swashbuckling left-hander who will be a player to be watched out for in the days to come.

The recently completed One-Day International (ODI) series between South Africa and Bangladesh saw the latter winning it 2-1. Doing so, Bangladesh have completed a hat-trick of ODI series wins at home. First they beat Pakistan 3-0, then India 2-1 and the latest to fall prey to them is South Africa.

With one down in the series, it was Sarkar, who got them in the competition with two back-to-back aggressive knocks in the last two ODIs. He was named the man-of-the-match in the last two ODIs and also went on to lay his hands on the man-of-the-series trophy. It’s an achievement when you consider not long back Bangladesh were considered ‘minnows’ and what makes it special is the fact that it was a 22-year-old inexperienced lad who scripted the win.

Sarkar catches the attention because of fearless batting. He not only scores runs at a brisk pace but also makes batting look attractive. His ability to pick gaps and clear the infield with ease makes him an effective opener. He’s belligerent in his approach but at the same time appears stylish. He is also effective against spinners and doesn’t let them settle down. Though it’s too early to get into comparison but there is a David Warner factor in his batting.

Batsmen from subcontinent aren’t really known for their skills against short-pitched stuff and Bangladeshi batsmen have struggled the most. Sarkar has broken the myth with his quick reflexes and his good habit to watch the ball till the end. His upper cut to Kyle Abbott in the 19th over of the third ODI brought back memories of the great Sachin Tendulkar. He kept an eye on the ball till the very last moment as he executed it to perfection over the wicketkeeper for a boundary. Whenever the ball was pitched short he was on to it in a flash.

In the third ODI, Sarkar became the first Bangladeshi batsman to score consecutive fifties against the Proteas. To add to his good fortunes, he also recorded the fastest fifty for a Bangladeshi batsman against South Africa.  While chasing a total of 170 in 40 overs (D/L method), Sarkar fired 90 off 75 deliveries to jockey his team to a winning position.

In 16 ODIs, he averages over 49 with a strike-rate of 102.51. He is still very young and has a lot to learn. With time being on his side, he will only enhance as a batsman.

Cricket is a game of uncertainties and in how many times have we seen a promising young talent fading way. Sarkar too has marked his presence but it will be interesting to see how Bangladesh nurtures him. As of now, Bangladesh is experiencing a fruitful time and have shed off the derogatory ‘minnows’ tag. They’ve discovered some good future in the form of Sarkar, Mustafizur Rahman, Sabbir Rahman, Mominul Haque, Taskin Ahmed and Liton Das. With the established likes of Shakib Al Hasan, Tamim Iqbal, Mushfiqur Rahim and Mashrafe Mortaza, Bangladesh cricket looks in safe hands. 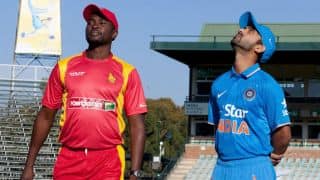