It was Ganguly who showed how a team is led abroad. All you had to do was to follow his footsteps.

So, MS Dhoni’s Test captaincy has been officially branded “obnoxious”. After all it was the great Sourav Ganguly who said so, don’t you know? The one who always wore his heart on his sleeve and continues to speak his mind. It is part of the unwritten constitution of Indian cricket to say, “Yes, Dada, I agree with you. You always speak the truth.”

After all, can we forget his contribution to Indian cricket? If only the captains who followed him walked his wonderful trend blazing path. India would not have to see this day.

He did show the way, didn’t he? Remember the Lord’s balcony? Where he stood and waved his shirt bare chested after the Natwest triumph? And then can one forget the other tournament wins … like … er … um … eh? Okay, there seems to be only one tournament that he won … and don’t tell me how many MS Dhoni has. We are not discussing One Day Internationals (ODIs). Anyone can win there, even with obnoxious captaincy. It is Test cricket we are talking about. The stuff of real men.

Hasn’t Ganguly shown us how to win overseas? He won the all those series in Bangladesh, Zimbabwe and …er… um … eh? Are you kidding me? Oh yes, Pakistan, Pakistan!!! In 2003-04 — let us forget for a moment that Rahul Dravid led two of the three Tests there. Yes, I know Dhoni won in West Indies and … well, yes, New Zealand too? Yes, yes, he did win there the last time. Yes, I know that it had been 33 years since the last Test win in New Zealand … yes, 42 years since the last series win. But, all that is irrelevant. We are talking of the current scene.

It was Ganguly who showed us how a team is led abroad. All you had to do was to follow his footsteps.

You remember how he conquered New Zealand? In 2002-03? Don’t look at the result. Ganguly is always far beyond numbers — we have learnt by compulsion to steer clear of statistics. Look at the splendid way he led the team.

And with such minimum resources. He did not have the type of firepower MS Dhoni has in his current team. It was a side he was building from scratch … with only Virender Sehwag and some others like Dravid, Sachin Tendulkar and VVS Laxman. The bowling had — well a Zaheer Khan and a Harbhajan Singh both 11 years younger. But, coming back to the point, with these limited resources at his disposal, he made team India perform.

You remember how he conquered New Zealand? In 2002-03? Don’t look at the result. Ganguly is always far beyond numbers — we have learnt by compulsion to steer clear of statistics. Look at the splendid way he led the team

There were two Tests like this time, and er …both were lost. Yes, we lost the series 2-0 you don’t have to rub it in. But, look at how the team fought! How the captain stood in the field, marshalling his resources. That is what counts.

And the ODIs? There were seven, and we managed to win two, one of them by the skin of the teeth, and lost the remaining five. But don’t tell me 0-2 and 2-5. We are not discussing ODIs anyway. We know ODIs comprise an area riddled with pitfalls for Ganguly. We have also moved away from the question of overall captaincy, home captaincy and settled down on the singular point of away captaincy. And that is what we will discuss.

And Ganguly led from the front. He got 29 runs in the two Tests at 7.25 and 58 in the seven ODIs at 8.28. Wait, there must be some mistake. Did I forget a trailing zero? No? Anyway, as I said, Ganguly is not about numbers. He is about galvanising a side into world beaters.

It is not New Zealand only that we are talking about. What about South Africa? Ganguly led the team there a year earlier, didn’t he? Again, don’t point out that India lost the first Test and was saved by rain in the second. It is not the results we are talking about. It is about the pride and glory, with which we defended ourselves against Mike Denness when all those suspensions were handed. It was about telling Steve Waugh to shut up and concentrate on Australian cricket when he opened his mouth about the Denness issue. That we lost 0-1 in South Africa and 0-2 in New Zealand and Ganguly’s total collection of runs across the two tours was 119 from seven innings is irrelevant.

He has been there, done it, and shown the way. In contrast Dhoni’s captaincy — well! Ganguly has said it, right? It was obnoxious. 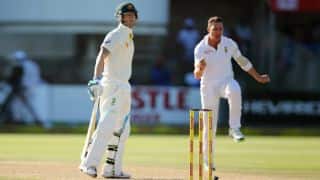