How many times have you seen history repeating itself? South Africa did it in the ongoing series against Australia in their own backyard. In the third match of the series, set a mammoth 372 to win, the Proteas chased down the total in style thanks to David Miller s heroics. With that match, they also won the series, as Australia were already behind 2-0 and had to win it at any cost. The next match too was won by the South Africans and with that, they have now come to Cape Town for the final match of the series. Another dead rubber, the match will be only of academic interest. However, both the teams have plenty at stake. Full Cricket Scorecard, South Africa vs Australia, 5th ODI

While South Africa will look to push for a whitewash, Australia will look to avoid the humiliation. Thus, while the Proteas would want to create history, Australia would look to avoid the embarrassment attached to it, though it looks a bit difficult. The margins of victory have been embarrassing for them so far. The hosts have won two of the four matches with more than 10 overs to spare, while one of them was won by a huge margin of 140 runs. The only competitive match was the third one in Kingsmead, Durban where Miller s genius won it for South Africa out of nowhere.

So, where do the Australians go from here? They will look to win this game and salvage some pride ahead of the home Tests against the same opposition. They have enough firepower in their arsenal to challenge the Proteas, who match them on every front. Let s have a look at the likely clashes that may take place in the match:

Kyle Abbott vs David Warner: Kyle Abbott s story has been an unfortunate one. Despite being a prolific performer for his side, he is never being assured of a permanent place in the playing XI. Take ICC Cricket World Cup 2015 semi-final for example. He was dropped from the side to make way for Vernon Philander despite being the best bowler for his country in the tournament. The result is for all to see. He was made to play the first of the two dead rubbers of the series, the fourth match, when the preferred bowlers were rested. And he made an immediate impact, picking 4 for 40. ALSO READ: South Africa vs Australia: The resurgence of David Miller

In that match, he uprooted the stumps of Australian openers Aaron Finch and David Warner, and later got Mitchell Marsh and Adam Zampa too. Warner is one of the only two Australian players in the series to score a hundred and if the visitors are to win the last game and restore some pride, they need him to fire. But he has a hurdle in Abbott to conquer. This should be an interesting contest.

Steven Smith vs Tabraiz Shamsi: Chinaman bowler Tabraiz Shamsi first hit the headlines earlier this year for his bus-driver celebration during the Indian Premier League (IPL), where he represented the Royal Challengers Bangalore (RCB). In a match against the eventual winners Sunrisers Hyderabad (SRH), he managed to get under the skin of opposition s captain Warner and also Zampa, who is playing in this series. However, in the last game, it was Australian captain Steven Smith that he troubled the most.

Smith, the other centurion for the series, needs to deal with Shamsi better in the final game. The spinner shall also be touring Australia for the Tests this month; another reason for the Aussie captain to be wary of him.

Mitchell Marsh vs Andile Phehlukwayo: The battle of the all-rounders is going to be another exciting contest. While Marsh has been a permanent fixture in Australia s limited-overs sides for a while now, newbie Andile Phehlukwayo has been a revelation for his side in his first series. He tops the wicket tally in the series with his 7 wickets in 4 games. Besides, he also made a remarkable contribution in the historic run-chase of 372 by scoring unbeaten 42 and adding crucial runs with Miller. All eyes shall once again be on him.

Marsh is expected to do for Australia what Phelukwayo is doing for his country. The clash of their all-round skills make it an interesting contest.

Adam Zampa vs Quinton de Kock & Faf du Plessis: Zampa has done a tremendous job for the Australians in recent times. He was a revelation in the Big Bash League (BBL) 2015-16 and followed it up with a superb run with the MS Dhoni-led Rising Pune Supergiants (RPS) in the IPL season 9 earlier this year. That led to a call-up to the national side in the Caribbean for the tri-nation series, where he continued to do well. A successful season of the Caribbean Premier League (CPL) followed and now he is up against a tough South African side, which has some really good players of spin.

Take for example their captain Faf du Plessis or opener Quinton de Kock. Both have time and again showed how good they can be against the spin. Both have been in tremendous form in this series and are sitting at the top two position in the list of top run-scorers. They will be up against Zampa and it will be a real test of the young bowler, who will not find the going easy against them.

On the whole, the match will offer some exciting other contests too. The players who hold on to their nerves shall emerge as winners. 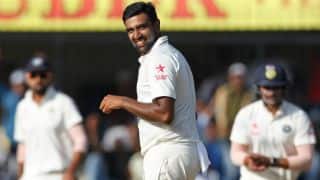 Why Ravichandran Ashwin is nightmare for electronic media