England will be without spearhead James Anderson who is replaced by Chris Woakes.

Alastair Cook led England team is all set to take on the hosts’ South Africa for a 4-match Test series starting from December 26. Boxing Day Test will be a crucial one as it will set the momentum for both the teams going into the upcoming matches. Both England and South Africa are coming from Test series defeats and will want gain confidence by winning the first Test, as it will boost the morale of that team and help them proceed in the series in high spirit. South Africa and England are set to clash at Kingsmead, Durban in the first Test. FULL SCORECARD: South Africa vs England, 1st Test at Durban

England played their last Test series against Pakistan in the United Arab Emirates (UAE) which they lost 2-0 in spite of a commendable performance in the first Test. Skipper Alastair Cook played a classic knock of unbeaten 263 runs as England chased down 523. England couldn’t perform up to the mark in the last two Tests as they lost their way to Pakistan. Cook remained in runs in the series indicating a positive for his side, while it will be a big loss for the Englishmen as their dependable bowler James Anderson will not be available for the first Test. Let’s have a look at the probable XI for the side

Top-order: Skipper Cook in all likeliness to come as an opener, that is his most comfortable position to bat and has been scoring runs consistently. While he can find a perfect partner in Test debutant Alex Hales, Nick Compton will come out as the No.3 batsman for them. Cook scored 126 in the last tour match as he was well supported by Hales who scored 56. If the two openers manage to establish a steady partnership, England will be able to put good runs on the board. ALSO READ: South Africa vs England 2015-16,1st Test at Durban: Likely XI for the hosts

Middle-order: The most dependable name in the English middle order has to be Joe Root. Root performed consistently over the past few matches and is expected to continue the same. Jos Buttler can be the next man in as even though he failed to perform in the Test matches against Pakistan, he performed very well in the One-Day Internationals (ODI) and is expected to carry forward that great form. With all-rounder Ben Stokes and Moeen Ali coming out following Buttler, the middle order looks much settled.

Bowlers: The Durban pitch is known to be helpful for pacers and England will likely go with four pacers. As confirmed by the England captain, James Anderson will be replaced by Chris Woakes. Stuart Broad being the obvious choice, the other two pacers are Steven Finn and Chris Jordan. Finn has performed exceptionally well with the ball in the tour match taking four match and is expected to make a terrific comeback to playing XI. The skipper will depend on Stokes to bowl for a good 10 overs. As the pitch starts turning after Day 3, Ali will more than just a handful after picking 6 wickets recently. ALSO READ: South Africa vs England 2015-16, 1st Test at Durban: AB de Villiers vs Steven Finn and other key battles 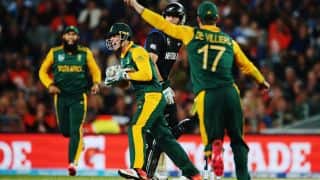 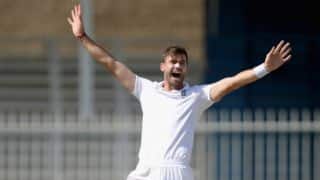