South Africa will want to win this crucial match if they need to have any chance of winning the series are facing issues with selection due to fitness of players.

With England leading the series 1-0 after two Tests in the four- match Basil D’Oliveira Trophy 2015-16, South Africa will play the third Test for a win. Given the fact that the manner in which the South Africans came back in the second Test at Cape Town, it is only a matter of time before they regain their mantel at home. South Africa will not find it easy going into the match after the sudden resignation of Hashim Amla still fresh in the players and fans’ memory. Vishal Mehra manages to decipher the most likely playing eleven for the Proteas from their list of available players. Full Scorecard: South Africa vs England 2015-16, 3rd Test at Johannesburg

Top Order: Dean Elgar is likely to stay put at the opening position given his recent performances being up to the mark with scores of 118*,40 and 44 in the first two Tests. South Africa will probably want more from the gritty left-hander. Stiaan van Zyl will land his final chance to prove his worth in the team after convener of selectors Linda Zondi backed his place. Van Zyl is yet to flourish in the series with his best being 33 at Durban. Coming in the coveted No. 3 is recently resigned captain Amla, who scored a match saving 201 in a run-monger Test at Cape Town. Amla will now look to perform to his old best as duties and responsibilities of captaincy have been relived. READ: AB de Villiers faces captaincy challenge ahead of 3rd Test vs England

Middle Order: Next will be Faf du Plessis, who along with Amla managed to pull out South Africa from another humiliating defeat. Du Plessis made a courageous 216 ball-86. South Africa’s newly appointed interim Test skipper AB de Villiers will be expected to provide the much-needed boost and sustenance to the middle order. De Villiers who made resolute 88 in the previous Test will look for a more resounding approach in the third Test with added pressure of captaincy to cope with.  South Africa’s new black sensation Temba Bavuma will want to carry from his innings of 102* and add to his ever increasing list of records he has to his name already. Bavuma in his feat of 102 became the first ever black cricketer to score a Test ton for the nation.

Lower Order: Quinton de Kock who came in the place of JP Duminy will want to lock his place in the playing eleven with a good performance with the bat. De Kock in the second Test played a rash shot to get dismissed, which was not needed. With de Villiers donning the captain’s role, it is more unlikely that de Kock shall keep wickets.  The Biggest problem for South Africa has been their ever-increasing list of bowlers with Kyle Abbott, Veron Philander and Dale Steyn nursing injuries and niggles. Steyn’s unavailability has been the most worrying news for the team.  Morne Morkel has looked well in parts and will be required to bring his A game this time around. READ:South Africa vs England 2015-16, 3rd Test at Johannesburg: Preview

The most lethal of the bowlers has been Dane Piedt with his right arm off-spin as shown in the final day of second Test. He single-handedly slumped England to mid innings collapse. Chris Morris, who was in his debut match, was able to spice up the game with a probing show in the second innings. He will get the tick to be in the final XI. Kagiso Rabada, who has been one of the finds of cricketing world, will want to finally show his talent after being overshadowed by Bavuma and Amla in the second Test. 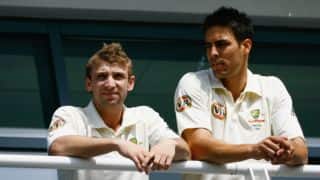