The South African team probably didn't even turn up at Kingsmead and the fact that New Zealand stayed on their Day Two score of 15 for 2 was difficult to absorb. Another promising day of Test cricket was lost.

Delay, wait, inspection, wait, inspection, stumps. That’s how Day Three at Kingsmead went by. Of course, the wait was agonizing, the frustration was justified. That not even a single ball could be bowled on a bright sunny day, almost perfect for cricket, because of a wet outfield, was enough to be disappointed about. The udometer had recorded 65mm rain on the previous night in Durban, a thunderstorm enough to ruin proceedings for a whole day. The South African team, probably didn’t even turn up at Kingsmead and the fact that New Zealand stayed on their Day Two score of 15 for 2 was difficult to absorb. Another promising day of Test cricket was lost. FULL CRICKET SCORECARD: South Africa vs New Zealand, 1st Test at Durban

When you watch Dale Steyn after eight long months of frustration that he has been through, due to injury, coming back and bowling a sublime spell of swing bowling, you do not want anything to come in your way. More so because, even Vernon Philander had hit the right areas, got the ball to move around, from the other end. They had brought back reminisces of their cherished past. But the drizzle on Day Two, came as a mood spoiler. And it continued, as covers were coming on and off till play was finally called off. READ: Why cricket is stuck in the past?

On the other hand, New Zealand would not have been too worried about what had happened. Yes, Guptill and Latham were back early, but two of their most prolific batsmen were still at the crease. Kane Williamson and Ross Taylor are well equipped to bail their team out of crisis and have done so in the past. Another wicket would have certainly put New Zealand in all sorts of trouble but it wasn’t to be.

Anyway, with whatever happened, and whatever could not happen on Day Three, questions about the number of covers and the drainage system are bound to come up. If the covers do not extend to the full outfield, and can only protect the pitch and square, surely more investment needs to be made. Perhaps, no one expected that this would happen, there would be wet muddy patches and even the super sopper could not be used as the puddles were so soft that it would have worsened the wet outfield. Nevertheless, the ground staff did try their best; but it just wasn’t going to be enough.

The day surely ended in shame. As it is – empty stands were the only witnesses on Day One. The Durbanites did show up on the second day, but then rain had different plans and even with the weekend round the corner, one cannot expect a huge number to turn up for the rest of the play.

Anything is possible, a result or a draw, but it will highly depend on how the pitch shapes up on Day Four. After soaking up sunshine for a full day, one can expect the pitch to behave in a different manner and may become flat, which might come as a surprise to Steyn and co. Nevertheless, as the weather forecast shows, we have two good days of cricket left, and afterall, that’s what we want. Isn’t it? 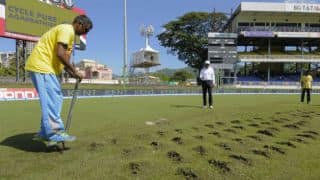