Day One of the second Test between South Africa and Sri Lanka that started at Cape Town on Monday completely belonged to the hosts. While the Protea opener Dean Elgar brought in his sixth Test ton, wicket-keeper batsman Quinton de Kock continued with his stupendous form and notched another half-century. In the process, he not just added important runs with Elgar and put his team in a commanding position, but also brought in his 1,000th Test run. The diminutive batsman has just taken 15 Tests and 23 innings to get to the milestone, with his average well over 52. While these two knocks were important highlights of the day, there were some other notable events too that happened in the day and defined Day One of this Test. South Africa s domination notwithstanding, there were a few Sri Lankans as well who found a mention on this list. A teenager rattling South Africa early on, a bowler almost twice his age getting his first over of the day almost around the half-way mark and a keeper not keeping the wickets; all this happened on Day One. Let us look at some of the highlights from first days play:

Dean Elgar s sixth Test ton: Stephen Cook was the Man-of-the-Match in the first Test while Elgar got starts in both the innings. The two put an end to the opening conundrum the South Africans had in Tests with their crucial stands in both the innings. Going a step further, Elgar hammered a hundred at Cape Town and played through the entire day. His knock held the innings together as South Africa recovered from a brief middle-order slump to post a commanding 297 for 6 at stumps on Day One. Major credit for the same goes to Elgar.

Quinton de Kock s 1,000 Test runs and yet-another fifty: QDK, as he is famously referred to as these days, continued with his rich form as he smashed yet another fifty; his eighth in Test cricket. In the process, de Kock also completed his 1,000 runs in Test cricket. He got to the landmark in just 23 innings from his 15 Tests and his runs came at an impressive average of over 52. Coming true to his reputation, de Kock hammered the Sri Lankan bowlers even as he came out to bat at a situation that demanded patience. But the aggressive batsman got to his fifty in just 61 balls and punctured whatever little hopes Sri Lanka had. He remained unbeaten on 68 at stumps on Day One and has given South Africa hopes of an above-par score on Day Two.

Wicketkeepers in abundance: This Sri Lankan playing XI has wicketkeepers aplenty. They have Dinesh Chandimal, who keeps wickets regularly. Then they had Kusal Perera, another specialist keeper who was left out for this Test. When Chandimal had overnight fever and he could not take field early in the day, many wondered who will keep the wickets now. But young batsman Kusal Mendis executed the job to perfection, as he took three catches in the day, with the one of JP Duminy being spectacular. So good was he behind the stumps that when Chandimal came out, he did not take the gloves from Mendis and allowed him to continue. Interestingly, team s opener Kaushal Silva is also a specialist wicketkeeper while Upul Tharanga also dons the gloves occasionally.

Rangana Herath s delayed arrival: For reasons best known to him, skipper Angelo Mathews kept Rangana Herath away from action till the 42nd over. When the magician did arrive, he created a chance immediately, but Tharanga dropped a sitter to hand Faf du Plessis a respite. Taking it in his stride, Herath continued to bowl well and soon got the reward when du Plessis was caught byMathews in the slip, quite ironically. Did the Lankan skipper think about bringing Herath earlier into the attack at that point?

Teenage prodigy: Sri Lanka drafted in a teenager Lahiru Kumara at the expense of Dushmantha Chameera and he delivered. The 19-year-old pacer, who was generating some serious pace, got rid of Hashim Amla and Duminy in quick succession. He got both his wickets in the same over as his twin strikes reduced South Africa from 66 for 1 to 66 for 3. While Amla was clean-bowled as the ball sneaked through the gap between his bat and pads, Duminy edged a rising delivery on the leg side to the wicketkeeper. Kumara added one more wicket in the day when he got Temba Bavuma to finish with figures of 3 for 86. He has been some find for the island team, hasn t he? 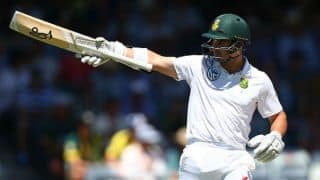 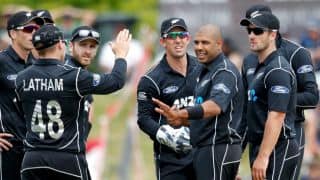