After beating Australia in their own backyard and winning the first Test against touring Sri Lankan side, the South African-juggernaut crushed the hapless visitors in the second Test as well.

After beating Australia in their own backyard and winning the first Test against touring Sri Lankan side, the South African-juggernaut crushed the hapless visitors in the second Test as well, thus taking unassailable 2-0 lead in the three-Test series. Pacer Kagiso Rabada s 10-wicket haul in the match of which 6 came in the second innings ensured the hosts earned the victory in the first session on the fourth day of the match. South Africa, who had won the Port Elizabeth Test by 206 runs, won the affair at Newlands, Cape Town by 282 runs, and will go into the dead-rubber Test at New Wanderers, Johannesburg with their tails up. It was overall a complete team effort for them. In this segment, we rate their players performance in the match on a scale of 10. Take a look:

Dean Elgar: Elgar would have been the strongest contender for Man of the Match had it not been for Rabada s brilliance. He scored a career-best of 129 in the first innings and laid a solid foundation for an above par score on a pitch which had plenty of grass on it. He held the innings together even as most of his teammates struggled and helped his side reach 392. In the second innings too he was exceptional with a crucial knock of 55.

Hashim Amla: Amla scored 29 in the first innings and added 66 crucial runs with Elgar for the second wicket after the side lost first wicket for naught. His defence was breached by Lahiru Kumara. In his second outing he went for a duck. He will like to forget this game on a personal note and do well in the final Test.

JP Duminy: Duminy had a decent first Test, but the second Test was a mixed one for him. He fell for a duck in the first innings, but returned to score 30 (thus replicating Cook s scores in each innings) and add vital runs with Elgar. He also used the review twice succeeding once and failing on the other occasion. The need for him to bowl in the game did not arise.

Faf du Plessis: Skipper du Plessis contributed with bat in both innings, was energetic on the field and marshalled his troupe really well. His field placement and use of bowling resources were also immaculate.

Temba Bavuma: After a forgettable outing in the first game, Bavuma failed in the second Test as well. He could manage just 10 and a duck in the game. He was good on the field though, as always.

Quinton de Kock: De Kock s purple patch extended in this game too, as he hammered his third Test ton in the first innings and followed it up with a quickfire 29 in the second. Behind the wickets too he was extremely agile, as he took 4 catches and effected a stumping.

Keshav Maharaj: With pacers dominating the proceedings, there was little for Maharaj to do in the game. He played the supporting role to the fullest though, chipping in with 3 wickets in the match. Besides, he also made vital contributions with the bat and remained unbeaten in both innings, the highlight being the six that he hit the first by a South African in this series.

Kyle Abbott: Abbott went wicketless in his last Test for South Africa following his Kolpak deal with Hampshire. However, he bowled well in the game and was unfortunate the wickets did not come. As night-watchman, he scored 16 runs in the first innings.

Vernon Philander: Philander wiped off Sri Lanka s lower-order in the first innings and then got the openers in the second. He batted well too, scoring runs in both innings. He even completed his 150 Test wickets in the match.

Kagiso Rabada: Rabada was named Man of the Match; need I say more? He got 10 wickets in the match, with 9 of them being of top-order batsmen. The tourists found him too hot to handle. 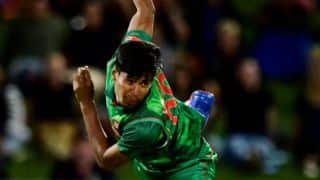