Sri Lanka beat South Africa by 5 wickets in the third and final T20 International (T20I) at Newlands, Cape Town. As a result, they also won the T20I series 2-1. It was an exciting chase from Sri Lanka. They had their ups and downs in the game, but eventually emerged the victors. Niroshan Dickwella was excellent with the bat, like he has been through the series. Seekkuge Prasanna played a bludgeoning innings, but was also very efficient with the ball. This Sri Lankan side did not have their skipper Angelo Mathews, yet played exceptionally well. After a disappointing Test series, T20I series win would have just been the boost Sri Lanka would have needed ahead of the One-Day International (ODI) series. There were some moments from the match worth reliving. Here they are:

Seekkuge Prasanna s introduction: South Africa were going great guns in the first 4 overs. That is when Dinesh Chandimal brought on leg-spinner Prasanna inside the powerplay overs. That turned out to be a masterstroke as he removed opener JJ Smuts off the second ball of his spell. Prasanna conceded just 21 runs from his 3 overs. Smuts looking to play a sweep, played across the line and was eventually dismissed for a 14-ball 19. Full Cricket Scorecard: South Africa vs Sri Lanka 3rd T20I at Cape Town

AB de Villiers fifty on return: De Villiers returned to international cricket for the first time since June 2016. He was in good form as he came into the game at the back of a brilliant century in a domestic one-dayer. He initially started off very slowly but he made up for his slow start, slamming a 35-ball fifty. He was eventually dismissed for 63 off 44 with 2 fours and 3 sixes punctuating his innings.

Reza Hendricks bizarre dismissal: Hendricks played second fiddle to de Villiers through most of the partnership. The duo added 71 for the second wicket and set an excellent platform for the middle-order. Hendricks was eventually stumped by Lakshan Sandakan. While it might sound like any other normal stumping, what made it extraordinary was the fact that Chandimal knocked the bails off only in the second attempt. He missed the stumps altogether when he tried to knock over the bails, but in spite of the fact that he took more time than usual to disturb the wickets, Hendricks still failed to put his foot behind the line.

Hat-trick of dropped catches: During Sri Lanka s seventh over, as many as three catches were dropped off Wayne Parnell s bowling off consecutive deliveries. Hendricks dropped Dhananjaya de Silva at fine leg, then Dickwella was dropped by the wicketkeeper and the ball hit the fence. Just when it appeared that it was the end of drama for that over, Parnell then dropped a catch off his own bowling, again of Dickwella. South Africa dropped many more catches and their ground fielding too was poor, which is perhaps the reason they lost the match.

Niroshan Dickwella s crucial fifty: Dickwella went at less than run-a-ball till Upul Tharanga was at the crease. After Tharanga was dismissed for a 11-ball 20, Dickwella took charge of the match. He did have a couple of lucky escapes, but he cashed in on it and scored what turned out to be a match-winning 51-ball 68. He took on all bowlers and did not let anyone settle. He put on 71 for the third wicket with de Silva, which was perhaps the most crucial partnership of the innings.

Seekkuge Prasanna s match changing innings: Prasanna scored 37 off just 16 deliveries, which included 3 fours and as many sixes. He hit two sixes and a boundary off Parnell in the 17th over of the innings, which completely turned the match in Sri Lanka s favour.

Asela Gunaratne s premature celebration: Sri Lanka needed 11 runs to win off the final over. Debutant Dane Paterson was handed the ball. Gunaratne scooped the ball over fine leg off the first delivery to collect a boundary. Sri Lanka needed 7 off 5. The next two deliveries yield two singles. Sri Lanka now needed 5 off 3, with Gunaratne back on strike. Gunaratne top-edged the ball over the wicketkeeper s head. While the ball was trickling down to the fence, he pulled the wicket out and started celebrating, not realising his side needs one more run to win. His partner then calmed him down and asked him to stay focused. He struck the winning run of the next delivery. 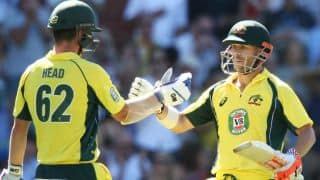