Following a dreadful performance in the just concluded Test series and the first T20I at Centurion, Sri Lanka redeemed themselves to some extent by levelling the series at Johannesburg.

Following a dreadful performance in the just concluded Test series and the first T20I at Centurion, Sri Lanka redeemed themselves to some extent by levelling the series at Johannesburg. They will now take on the hosts for the deciding third T20I, at Newlands, Cape Town, on Wednesday. Angelo Mathews took a couple of bold decisions for the Johannesburg T20I. Isuru Udana, who had last played a year back, was recalled. He took 3 for 13. On the other hand, debutant Chinaman bowler Lakshan Sandakan completely bamboozled the South Africans with 4 for 23. Even then South Africa made a match out it, but Mathews fought a hamstring injury, batted on one leg and hit two sixes in the last over to snatch a much-awaited victory for Sri Lanka.

Unfortunately for Sri Lanka, they have received a triple-blow just before the third T20I. Mathews himself will be flying back home, as will Nuwan Pradeep and Danushka Gunathilaka. They will be replaced by Upul Tharanga (who will lead them in the ODIs), Lahiru Madushanka, and Chaturanga de Silva. Unfortunately, none of them will arrive in time for the third T20I, which will leave Sri Lanka a group of 12 to pick their 11 men from. Do not be surprised if a South African substitute shows up on the ground during the match. Let us have a look on how the Sri Lankans would field themselves in this decider. FULL CRICKET SCORECARD: South Africa vs Sri Lanka, 3rd T20I at Cape Town

The selection will not be much of a challenge, for they have to leave out only one man out of twelve. Dinesh Chandimal auto-selects himself as captain (and wicketkeeper). Their onslaught at Centurion will make Niroshan Dickwella and Dhananjaya de Silva certainties. This will mean that the battle will be between Kusal Mendis, Sachith Pathirana, and Asela Gunaratne, two of whom will be selected, more so because Seekkuge Prasanna can provide firepower down the order. Their bowling abilities will almost certainly give Pathirana and Gunaratne the edge, which means the axe will probably fall on Mendis. The one-legged determination of Mathews

If Mendis sits out, the rest of the batting line-up will consist of Prasanna, Thikshila de Silva, Suranga Lakmal, Nuwan Kulasekara, Lakshan Sandakan, and Isuru Udana. 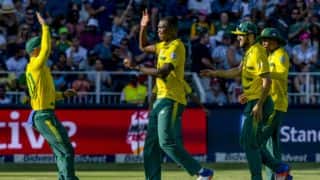