The ODI series between South Africa and Sri Lanka has reached to a point where the hosts are awaiting some serious competition from their opponents.

The One-Day International (ODI) series between South Africa and Sri Lanka has reached to a point where the hosts are awaiting some serious competition from their opponents, despite clinching the series 3-0. The fourth ODI at Newlands in Cape Town will be another opportunity for Sri Lanka to avoid a whitewash. Although Sri Lanka won the T20I series, the ODI series defeat has hit their morale once again. Meanwhile, South African batsmen have been at the top with two centuries in this series and have also gone past 300-run mark when they batted first. Although injuries crippled them, the Proteas remained unfazed and put up an all-round show to clinch yet another series against Sri Lanka. Full Cricket Scorecard: South Africa vs Sri Lanka 4th ODI at Cape Town

Let us have a look at the likely XIs for both sides for the fourth ODI:

Top-order: South Africa s top-order comprises of power-hitters. Quinton de Kock might not have got any fifty to his name in this series, but he can be a dangerous batsman on his day. On the other hand, Hashim Amla s century during the Test series boosted him to go all guns blazing in this series, where he got a fifty in the first ODI. When Amla and de Kock complement each other, they can provide steady beginning to the Protea innings. With a century and a fifty coupled along with jaw-dropping catches, Faf du Plessis easily poses a threat to Sri Lankan bowlers and batsmen. He will be raring to go all out on a pitch that is expected to be batting-friendly.

Despite several experimentations, Sri Lanka s top-order conundrum has remained constant. Although Niroshan Dickwella and captain Upul Tharanga have tried to provide the push in the previous matches with strong foundation, the remaining batsmen have failed to comply to the impetus provided. Dickwella s inclusion has been a boon for Sri Lanka since the T20I series as he has continued his form in ODIs as well. Tharanga can assist his partner well and bring his top-order experience into fray. Kusal Mendis will need to anchor the innings just like the first ODI, if one of the opening batsmen fails.

Middle-order: With the captain AB de Villiers beginning the middle-order, he can change the scenario of the match at any given time. Remaining unbeaten twice in this series, de Villiers has the capability to provide support and can easily smash the ball out of the stands. This order is further settled with the likes of JP Duminy and Farhaan Behardien entering at No. 5 and 6. The spotlight shall be on Behardien, who is yet to show his batting display after being called in as replacement for Miller.

South Africa might have lost the T20I series under Behardien s captaincy, but he had a decent run in the series. He will be itching to bring his domestic T20 form to the table in the remaining games. In this order, it all comes down to the finisher of the side. It might be been there, done that moment for Chris Morris, who will be expected to continue the form in the remaining two games. South Africa vs Sri Lanka, 4th ODI at Cape Town: Key battles

At the other end of the spectrum is Dinesh Chandimal. So far he has not scored a single fifty on this tour and that has been worrisome for the wicketkeeper-batsman. He has also been sloppy behind the wickets. The two upcoming matches are the only opportunity for him to show his worth on an otherwise dismal tour. Dhananjaya de Silva will aim to score bulk of the runs and Asela Gunaratne can add those 20-odd runs as well. Sachith Pathirana s highest has been 45 playing at No. 8 against Zimbabwe last year and with scores of 26 and 18 at No. 7, he has been one of the positives of the middle-order.

Lower-order & Bowling: The lower-order is most likely not to face any responsibility with the top and middle-order handling the innings. South Africa will persist with Dwaine Pretorius, who earned Man of the Match for bagging three wickets, conceding mere 19 runs at the end of his spell. Andile Phehlukwayo and Kagiso Rabada will enter at No. 9 and 10. Although they have never got an opportunity to bat in this series so far, Rabada can add stability to the innings to keep the scoreboard ticking.

As for bowling, with the conditions being warm and windy, it will be a pace and spin combination. Rabada s red-hot form with combined forces from Pretorius, Phehlukwayo and Morris will mean Sri Lanka batsmen will have to play a careful innings if they wish to end the series on a positive note. As for the spinners, it is a toss-up between veteran Imran Tahir and newbie Tabraiz Shamsi. South Africa will want to see what Shamsi has to offer for the side after not so pleasing Australia series.

Sri Lanka s lower-order has been tested through the ODI series and has witnessed just single digits popping up from Lakshan Sandakan, Lahiru Kumara, Suranga Lakmal and Lahiru Madushanka.

Lakmal is the only bowler who has bagged maximum wickets (2) for the side in this series. Bowling has been minimalistic factor for Sri Lanka and a solid effort will be required to pull up their socks and save the side from precarious conditions. 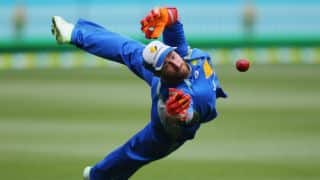 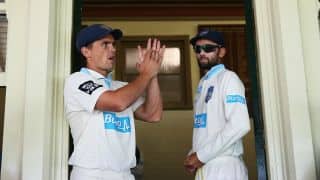