South Africa vs Sri Lanka: Hashim Amla lighting up his 100th Test, umpire’s ball-tampering and other highlights from Day 1 of 3rd Test

South Africa vs Sri Lanka: Hashim Amla lighting up his 100th Test, umpire’s ball-tampering and other highl
By Suvajit Mustafi

What is new? Hashim Amla finds form. He also becomes the eighth cricketer to score a hundred in his 100th Test. Otherwise this was just another Test going South Africa s way after initial hiccups. This has been the story of the South Africa-Sri Lanka series so far. Angelo Mathews might have smiled wide after Faf du Plessis opted to bat under near-overcast conditions on a pitch conducive to seam bowling. His fast bowlers undoubtedly did a fine job. Nuwan Pradeep and Suranga Lakmal extracted extra bounce from the surface to trouble the in-form South African openers, while Lahiru Kumara and Mathews himself kept the pressure on. There were two back-to-back wickets, but Amla and JP Duminy took control thereafter, both men scoring hundreds. South Africa finished the day with 338 for 3. Let us take a peek at the highlights of the day.

Umpire s way of ball-tampering: The Sri Lankan pacers had their tails up. The South African openers had just managed to survive the early storm. However, Sri Lanka were not happy with the ball after 11 overs. The umpires had a look and called for a new ball. Cook, and in particular. Elgar, were not happy with the ball, for they had just seen the shine off with some struggle.

Umpire Rod Tucker then had to knock the ball on the adjacent turf to take the shine off it to take it to a 10-over-old condition.

You do not see such sights in Test cricket every day.

Back-to-back wickets: Mathews caused some discomfort to the South African openers after the first drinks break. In his third over he got the ball move in late and hit Cook below the knee-roll. He was adjudged out . Not entirely convinced, Cook reviewed the decision. It seemed Mathews had overstepped, but third umpire Aleem Dar ruled it in Sri Lanka s favour.

There was, however, no doubt regarding the rest of the decision: the ball would have hit the stumps.

Amla walked out to bat in his 100th Test. The cheers were still on when Elgar, who had just begun to look good, nicked an angled-away delivery from Kumara in the next over to Dimuth Karunaratne at first slip.

Duminy has had a poor run since his fifty at Port Elizabeth in the first Test. Amla has been in woeful form of late. With the in-form openers back in the pavilion, South Africa had their back in the walls.

Dropped! Just at the stroke of the lunch, Dhananjaya de Silva at gully dropped a regulation catch of Amla. At that stage Amla was struggling, and the survival was getting difficult with every passing delivery. Sri Lanka could have reduced South Africa to 69 for 3. Amla was on a mere 5 at that stage.

The third wicket fell but much later in the day; and it was not Amla.

Duminy s day out: Duminy has responded to his promotion in the order quite well. With the Sri Lankan pacers dominating the course of play, Duminy decided to counterattack. He was in sublime touch. There were free-flowing drives, calculated late-cuts and apt use of feet against the guile of Rangana Herath. Duminy s 155 came at a strike-rate of over 70. He fell in the penultimate over of the day after adding a record 292 with Amla.

The unusual Amla fan: While Amla was enthralling all with those breathtaking drives, the camera panned to an African cameraman in a suit who sported a fake beard in turn showing support for Amla. The Wanderers can accommodate over 30,000 people, but just over five-and-a-half thousand were in attendance. There was no Hashim Army in the sight as well. Though the ones present made enough noise, this particular fan on duty stood out.

Amla s moment: Amla had averaged just over 24 in this series before today. This was a momentous occasion.

After the early toil, the runs came smoothly but there were anxious moments when he reached 49. He had three scores in the 40s since Australia tour and had not got a fifty since August. He saw off 10 balls before he got that single. Every time Amla looked tentative, Duminy would walk up to him and ensure his experienced teammate did not give it away.

Team spirit of this order perhaps defines this South African unit, even in these troubled times.

In the final session, Amla chipped using his feet chipped one over Herath to bring up his 26th Test ton in style.

At stumps he was on 125. Before he could be engulfed in the warm hugs of his elated teammates, the entire Sri Lankan team congratulated him. 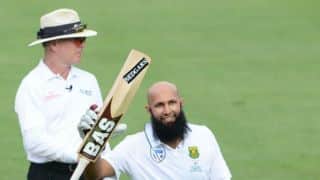 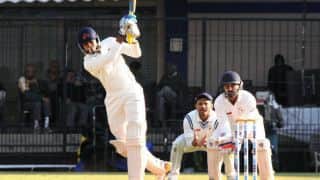