Only three Zimbabweans have played 200 or more: the Flower brothers, Andy and Grant, and Elton Chigumbura.

The second match of the three-game South Africa vs Zimbabwe ODI series in Bloemfontein on Wednesday will be the 200th ODI for current skipper Hamilton Masakadza. Only three Zimbabweans have played 200 or more: the Flower brothers, Andy and Grant, and Elton Chigumbura.

In an ODI career that began on September 23, 2001 against South Africa, Masakadza has so far scored 5512 runs at an average of 28.41, with five centuries and 34 fifties. His career-best of 178 not out versus Kenya in 2009 is the second-highest score in ODIs by a Zimbabwean after Charles Coventry s unbeaten 194.

Masakadza was named Zimbabwe captain in June, having earlier done the job mostly as a stop-gap option. This came after he made a strong comeback to the side in the second half of 2017, scoring 5, 41, 111, 28 and 73 in Sri Lanka to be named Player of the Series in a famous 3-2 ODI series win.

Ahead of his 200th ODI, here s a look at five of Masakadza s best innings.

Down 0-2 in the five-match series, Zimbabwe remained afloat thanks in no small part to Masakadza s maiden ODI hundred, which came in his 71st appearance. Put in to bat in Bulawayo, Zimbabwe were carried from 17/2 and then 60/3 to 202/4 by Mazakadaza, who hit four fours and two sixes in his 102. His fourth-wicker stand of 142 with Taylor (94) was followed by Chigumbura s 33-ball 61* that lifted the total to 323/7 from where Bangladesh were bowled out for 254. With his gentle medium-pace, Masakadza bowled Raqibul Hasan for 78.

The first ODI of this three-match series in Harare begun with Zimbabwe beating Pakistan by seven wickets with 10 balls remaining – their first win over them in any format for 15 years. Set a target of 245, the hosts were given an opening stand of 107 in 23.3 overs between Masakadza and Vusi Sibanda who made 54 off 82 balls. Masakadza hit nine fours and a six before he was second out at 176/2 in the 38th her, setting the stage for Taylor and Sean Williams to take Zimbabwe home. This was Zimbabwe s first win in seven international matches.

Craig Ervine was the hero of a famous win for Zimbabwe in Harare with an unbeaten 130 off 108 balls as a target of 304 was achieved off the last ball. But subtract Masakadza s innings and the chase would have gone nowhere. His 84 helped add 74 for the opening wicket with Chamu Chibhabha (42) and then 120 with Ervine in 15.1 overs. Masakadza hit 10 fours in his fifty, several of them muscular blows off New Zealand s spinners.

A match-winning innings in a game Zimbabwe needed to win to keep the five-ODI series alive. Batting first in Sharjah, Zimbabwe lost their openers for ducks to be 2/0 and then suffered a collapse of three wickets for three runs to slump to 38/5 after 14 overs. Masakadza looked on as that became 49/7 with Mirwais Ashraf and Rashid Khan doing further damage.

With support from Graeme Cremer (58 off 75 balls), Masakadza put on an eighth-wicket partnership worth 104 that formed the bedrock of Zimbabe s 175 in 48.3 overs. Masakadza reached his fifty off 98 balls, celebrated with a four and six in the space of three balls and then, once Cremer and Nevil Madziva fell in successive overs, tried to accelerate further before he was last out for 83.

The series was level at 2-2. Masakadza was the man in form for Zimbabwe, having scored a century in the third ODI. Zimbabwe needed 204 to win the match and with it the series. Solomon Mire helped him lay the foundation with 43 off 32 balls in an opening stand of 92, before Masakadza continued until he was cut off on 73 in the 24th over with Zimbabwe 137/2. The job had been done, and from there a famous win was completed in fits and starts. It gave Zimbabwe their first overseas series win since 2009. 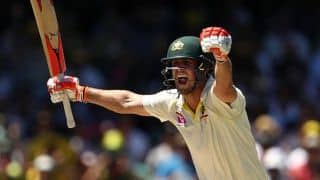 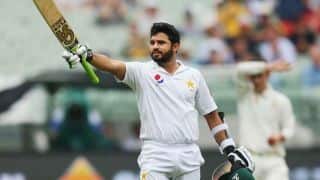