The intriguing statements by three veteran South African cricketers can certainly be expected to set the tone pretty early into the series which begins early next month.

From the South African perspective, their upcoming tour of Australia could not have come at a better time. Steven Smith and his men are on their knees, having suffered a staggering three separate whitewashes in the last one year or so, and the latest of them was inflicted by a team which, from the outset, looks to be in comparatively far better shape. South Africa have all of a sudden not only found their lost voice, but also the bravado, which is spurring them into picking some interesting battles which can only be fought on the cricket field. FULL CRICKET SCORECARD: Australia vs South Africa, 1st Test at Perth

The South African cricket team will be hitting down on the Australian shores in a few days time, and their upcoming three-match series their fourth cricket series against or involving Australia in the year 2016 alone promises to be a thriller. Dale Steyn, the menacing pacer looked at the top of his form in the rain-affected two-Test series against New Zealand. It is a fact that Steyn, who might be in the final years of his international career, has not been a force to reckon with as far as white ball cricket is concerned. But for a bowler of that repute, to make a statement as strong as the one recently made by Faf du Plessis shows that the South Africans have a lot in their minds.

First, it was Steyn, and now, AB de Villiers (who is yet to be confirmed for the upcoming tour) and du Plessis, who have spoken about their discomfort with the Australians. Steyn warned Australia that the South African bowling attack will turn into a pack of wild dogs when they get there, whereas de Villiers has touched a few emotional chords by recalling the verbal barrage which they were subjected to by Michael Clarke s Australian cricket team in 2014. De Villiers felt that Australia overdid what they did back in that series, terming it as the worst he has had to face in form of sledging in his career.

But the most interesting show of bravado has come from du Plessis, who may get a chance to captain South Africa in the three-Test series in case his mate de Villiers is not able to turn up fit in time. Perhaps keeping that in mind, du Plessis has played nothing less than a masterstroke, instigating a war of words with the Australians, who have been forced to keep their mouths shut following horror performances in the last couple of months.

Indeed, the thrashing by Sri Lanka in the Warne-Muralitharan Trophy 2016-17, followed by the 0-5 humiliation in one-day cricket of the world champions has not only forced Australia on the backfoot, but has also rattled their positions across formats. The Australians are no more world No. 1 in Test cricket; their position as world champions has taken a severe beating post their humiliation in South Africa. India and the ICC World T20 2016 had already shown Australia their place as far as T20 cricket is concerned.

Nevertheless, it is not about Australia, a team that needs some introspection and homework to do. It is about South Africa, who, having struggled across formats for months have all of a sudden found their voice. The absence of Mitchell Starc and Josh Hazlewood meant South Africa should not have read a lot into the clean sweep they registered against Australia. But South Africa s deliberate show of bravado, challenging Australia by saying that they left a few mental scars, is nothing but the touring party making use of all the benefit that they have in this situation.

The intriguing statements by three veteran South African cricketers can certainly be expected to set the tone pretty early into the series which begins early next month. South Africa is one team which lays a lot of emphasis on making strong starts, and by launching these verbal attacks, perhaps all they are trying to do is to get under the skin of the Australian cricketers.

While it is perfectly fine for South Africa to try every trick in the bag to register their third consecutive Test series victory in Australia, there must be some room left to watch out for the backlash. Du Plessis has acknowledged that South Africa will be starting afresh and his side will have to do a similar amount of hard work in order to win. But there cannot be any room for complacency as far as the South African team is concerned, and on the contrary, they should be ready to face the backlash.

After all, it is Australia. However they have performed in the recent past, they can be backed to turn up good on the match day, especially playing at home. David Warner s form looks ominous, and the return of Starc and Hazlewood would certainly pacify worried faces in the Australian camp. Steven Smith s team would know that the summer at home will never be easy, as both Pakistan and South Africa can be menacing and they will have to be at the top of their game.

Nevertheless, South Africa s attempt to get into the skin of the Australian team which is struggling as of now may actually give them a chance to win once again Down Under. But words will have to be backed by performances, and the South Africans who have had only one good Test series against New Zealand at home in the last one year or so, will have to show that they are getting back to the consistency for which they were known for. 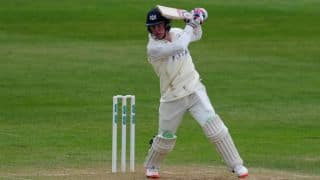