South Africa have been in stellar form in One-Day Internationals (ODIs) this year and are ranked No 1.

South Africa have been in stellar form in One-Day Internationals (ODIs) this year and are ranked No 1. Their batting has been nothing short of exemplary and is one of the reasons for their superb showing in ODI cricket. Indrajit Dutta advances.

The South African ODI batting line-up has hit a purple patch. They have been instrumental in the team winning all their three tournaments this year.

After an inconsistent 2013 in ODIs the Proteas have roared back into form this year. Furthermore all their series victories this year have come in different conditions. Not for nothing are they the top-ranked ODI side. Their win against New Zealand in the ongoing series is ample proof that they are not about to lose their number one ranking.

The first of the three triumphs came in Sri Lanka in a three-match ODI series. The batting gave a very good account of themselves in Sri Lanka. It showed why the Proteas are such a highly-rated side. Not known for playing spin very well AB de Villiers’ side were resolute against the Lankan spinners.

In Sri Lanka, de Villiers led the way with 208 runs in the three games at an average of almost 70. His hundred in the decider was one of his best ODI knocks. He bludgeoned the Sri Lankan as he made 104 in only 71 balls, while Hashim Amla and Quinton de Kock kept on establishing themselves at the top of the order.

The triangular series win where they outplayed Australia showed that they can quickly adapt to different conditions against different sorts of bowlers. The manner in which they chased in the tournament was a fantastic example of staying calm even when chasing a huge score. Both de Villiers and Faf du Plessis have played crucial roles, displaying a maturity players of other teams would envy.

The ease with which they chased 327 against Australia in the tri-series in Zimbabwe earlier in the year was something to be marvelled at. De Villiers was in sublime touch again as he hammered out 136 off only 106 balls. Du Plessis gave him terrific support with his maiden ODI hundred. Their 201-run partnership was one of the highlights of the tournament.

Du Plessis has been been instrumental in South Africa having a good year so far. His showing this year has been phenomenal. This year in eight games he has made 618 runs at an average of 68 with three hundreds to his name.

His 96 in the tri-series final was a special innings by any standard. It was not for the first time that du Plessis played a stupendous knock under pressure. The 134 in the Johannesburg Test against India where South Africa nearly chased a score in excess of 400 was another example. He is definitely on his way to become the lynchpin of the batting line-up.

Talking of consistency, there have been few who can beat Amla, even across formats has been ever consistent. A tally of 724 runs at average of 60 this year is proof of the fact. If  he carries this form into the World Cup bowlers would be having sleepless nights.

De Kock, on the other hand, will definitely be one of the batsman to watch out for in the ICC World Cup 2015. His showing against India, followed by those later in 2014, have been nothing short of stellar. The aggressive nature of his batting pushes other teams on the backfoot as Sri Lanka found out in the decider. He will, however, be tested during the seven-ODI series in Australia.

In 2013 South Africa had an indifferent year in ODIs. They lost in the semifinals of the Champions Trophy and at home to Pakistan and New Zealand. At that point inconsistency was affecting the batting. It was in the same year against India that they came together and did very well as a unit. The move to continue with de Kock as opener paid off as he hammered a hundred in each of the matches.

Since then they’ve gone from strength to strength. An aspect of their success has been their clinical approach, especially while chasing. The credit for this surely lies with de Villiers and du Plessis. In the first ODI of the ongoing series against New Zealand de Villiers guided his side to a win with a composed 89 not out after the Kiwis had South Africa in a spot of bother at 97 for four in a chase of 235.

In addition to their versatile (from traditional to innovative) strokeplay, South Africans run extremely well between the wickets, thus reducing the proportion of dot balls. It ensures the run rate does not reach alarming proportions.

In the past the Proteas have crumbled under pressure in the World Cups. The best example of this came perhaps in World Cup 1999 semifinal against eventual winners Australia where they failed to chase 214.

This had come after Brian Lara’s dazzling hundred had knocked them out of the tournament in 1996. More recently, in World Cup 2011 quarterfinal, the chase went awry and they collapsed to 172 after New Zealand put up 221. In between, they miscalculated the par score for Duckworth-Lewis and were eliminated in the group stage in 2003.

In the past year the batting has shown it can withstand pressure and even dominate in such situations. This augurs well for de Villiers and his men. South African fans would hope they can keep this going. 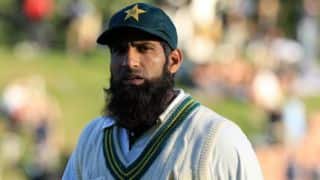