South Africa's poor record during chases has something to do with a lack of good starts.

South Africa are not the best team when it comes to chasing. They often rely a lot on one or two batsmen to get over the line. Gaurav Joshi puts forth that this tendency of over-dependence on a couple of players is affecting them in chases in limited-overs cricket.

The five-letter word starting with ‘C’ and ending with ‘E’ keeps haunting South Africa during major tournaments and while they are one of the favourites heading into the ICC World Cup 2015, the first three games versus Australia have highlighted major deficiencies in their ODI game.

In two of the past three ODI matches South Africa has conceded over 250 runs. It might not seem a lot in the modern standards but the figure is vital when it comes to dismantling the South Africans.

Australia has shown in the current series when the opposition bat first and mount a total excess of 250 the Proteas struggle. One of the major reasons is that their lower order is depleted. Their only grace is that JP Duminy will add stability to the middle order but based on statistics over the past two years, it seems if the much fancied South African bowlers cannot restrict the opposition under 250 then South Africa generally tend to lose rather than win.

Despite having a bowling attack such as Dale Steyn, Morne Morkel and Vernon Philander, the Proteas have managed to restrict the opposition under 250 on 9 out of 20 occasions when they have bowled first.

It is quite obvious South Africa lack the potent lower order batting that made them so successful few years ago.  In South Africa during the 4-1 series win against Australian 2009, they managed to chase down two scores of over 250, on both occasions they won by 3 wickets and the catalyst was Albie Morkel at number 8 and Johan Botha at number 9.  In one of the victories against West Indies chasing 252, they were guided at the end by the lusty hitting of Robin Van der Merwe, hard hitting lower order batsmen. In the ICC World Cup 2011, chasing 297 against India, it was A Robin Petersen cameo from number 9 that took South Africa over the line.

South Africa’s poor record at chasing targets in the past couple of years seems to coincide with their lack of good starts.  Young wicketkeeper, Quention de Kock is the major culprit only averaging 20 compared to his average of 42 when South Africa bat first.  Given de Kock’s poor record and the South African batting with Ryan McClaren at number 7, it means in theory South Africa are extremely light in the lower order and rely far too heavily on Amla, Du Plessis and De Villiers not only to contribute but to finish the innings.

South Africa might start as one of the favourites but they have glaring issues while chasing targets and the team balance is a key issue that they will need to overcome as the World Cup approaches. They might cruise through the preliminary rounds but time will come when they will need to chase more than 250, in a knockout match and given their recent record and the team combination they might fall at the last hurdle. If they do, the nasty five letter word starting with ‘C’ will be mentioned again. 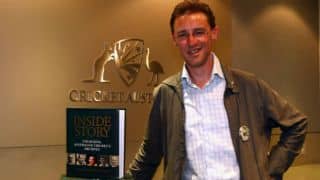